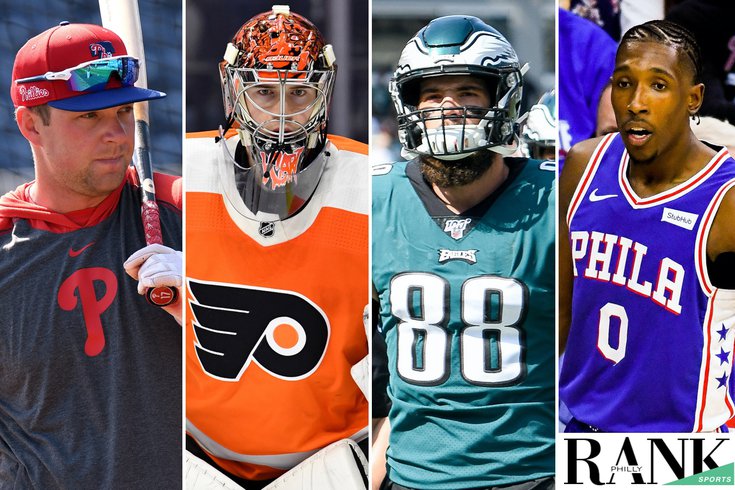 Rhys Hoskins, Carter Hart, Dallas Goedert and Josh Richardson all finished in the 20s in our list of the best Philly athletes.

Ranking the top 50 athletes in Philadelphia based on how good they are right now. It's a basic premise, but one that we found out is a lot more difficult than it first sounds.

Before we get into the rankings and have thousands of Philadelphians tell us we're wrong, we should first spell out our methodology and how we arrived at the below list because well, there's not much else going on at the moment.

Now that we all know the rules, let's continue with the 2020 edition of PhillyRank. Here's a look at the players who finished in the 30-21 range:

Considering he was a first-round pick for the Eagles back in 2017, fans may have expected more from the young defensive end, especially after he broke Reggie White's sack record while at Tennessee. The Eagles, however, had some real depth at DE in his first two seasons in Philly, so he was worked into Jim Schwartz' defense slower than many initially thought. But he's shown improvement and posted a career high 6.5 sacks last season despite playing less than 70 percent of the defensive snaps (which was also a career high for him). There's definitely room for improvement here, and if he continues on his current trajectory, it's safe to bet he'll be moving up this list the next time these rankings come out. He's still just 23, after all.

We've yet to see Hargrave play in an Eagles uniform, but if his play in Pittsburgh is any indication, Philly picked a talented tackle to pair alongside Fletcher Cox in the middle of their defensive line. Hargrave has been starting in the middle of that Steelers line since his rookie season in 2016. He'll likely supplant Malik Jackson, whose 2019 season was cut short by a foot injury, as the second starter at DT. And if Cox can continue to draw double teams and extra attention from the offense, Hargrave could be in line for his best season yet under a defensive coordinator who likes to let his defensive front pin their ears back and go after opposing quarterbacks. Beyond that, he should make an already dominant run defense even better.

By all accounts, Segura had a down year in 2019, posting some of his lowest offensive numbers in several seasons a year after being named an All Star for the second time in his career. But he's still under contract in Philly for a couple more years, so there's time for him to turn it around, especially as he'll enter the 2020 season (whenever that actually happens) with not only a new manager in Joe Girardi, by a new hitting coach and new team philosophy as well. Sometimes, when a new coach comes in, it could be cause for concern, but in this case, it's almost certainly going to be a positive for everyone up and down the lineup. On top of that, Segura also takes over a new position at third base after spending nearly his entire career at shortstop. It should be an important year — for better or worse — for the Phillies infielder.

Finding the right sport for Hoskins on this list was difficult, because his number for the first third of the season were great. Over the next third, they were pretty bad. And his numbers over the final third of the season were just downright awful. Like, below replacement player bad. And in the end, it all added up to a pretty down year for the Phillies slugger. If we went just on last year's numbers, Hoskins likely would've been even lower on this list. But because of the promise he showed in early goings in 2019, there's reason to believe he can return to form in 2020. The question is, will he be able to keep those numbers up for an entire season? Maybe Girardi can help with that...

It's been years since Andrew McCutchen was an All-Star, but he might have been headed for a return to the Mid-Summer Classic last year had his season not been cut short by a freak ACL tear a little more than a third of the way into the season. Sure, he wasn't hitting for a high average, but he was getting on base at a rate he hasn't topped since his last All-Star season in 2015. He was also among the lead leaders in walks at the time of his injury and was really the catalyst of the Phillies offense hitting atop the order — and we saw how they struggled to replace him after that injury. The good news is that Cutch should be fully healthy whenever the baseball season starts. It will be interesting to see if he picks up where he left off last season, or if all that time off (and his age) catches up to him in 2020. We're leaning toward the former.

Carter Hart is the youngest player on our list and just barely cracked the Top 25. Of any player on the list, he probably has the best chance to climb — if he can indeed become one of the best goalies in the NHL, there's no reason he couldn't find himself in the Top 10 (or even the Top 5) in a future version of these rankings. The question seems to be more "when" than "if" after two impressive seasons for the young Canadian. This season, Hart picked up his first shutout and played a big role in helping the Flyers on their rapid climb up the Metro standings. Fully healed from an in-season injury, he was in a great position heading down the stretch and into the playoffs and was primed for his first playoff action — that was, until the season came to a screeching halt. For now, we'll have to wait to see how the 21-year-old goalie performs when the lights are the brightest, which could have been an indication of just how high he can climb in the next iteration of this list.

Like Hargrave, Zack Wheeler is another player we've yet to see play a game in Philly — although he did make three spring training appearances before sports stopped. He comes with an injury history, but has been solid for the Mets each of the last two seasons before the team decided to let him walk in free agency. After a season of some dreadful starting pitching, the Phillies just so happened to be in need of upgrades. With the market for top-tier pitchers expected to get out of control (which it did), Matt Klentak decided to scoop up Wheeler before the market was set by some of the bigger names, and he arguably got a good deal by doing so. Of course, we'll have to see what Wheeler looks like in red pinstripes before we make a final judgement, but we feel comfortable slotting him in right here for now.

Despite playing in just his fourth NHL season, Ivan Provorov is just 23 years old, although it certainly feels like he's been around longer than that. Perhaps that's because the Flyers defenseman has yet to miss a game for the Orange and Black since getting the call up to the big club prior to the start of the 2016-17 season. And before the season came to an abrupt end, Provorov was on pace for his best season to date, averaging .52 PPG through the first 69 games of the year. He was also leading his team in average ice time (24:51) by almost three minutes — but that's nothing new for Provorov, as he led the team in ATOI each of the previous three years as well. It might be a matter of time before he's wearing an "A" on his jersey.

Why is the Eagles second tight end this high on the list? Well, because if it wasn't for Zach Ertz, Goedert's numbers would look far more impressive. But because he plays second-fiddle to one of the best tight ends in the NFL, his numbers clearly took a hit. Still, Goedert has looked capable of playing the starter's role in his first two seasons in Philly, and depending on what the future holds for Zach Ertz, he could find himself as one of Carson Wentz' top targets before too long. The potential is there even if the numbers aren't, so we're not going to hold the fact that he's not the No. 1 tight end against him. And when you compare his numbers over his first two seasons to Ertz' stats from his first two in the NFL, they're scary close

Could Goedert wind up being as good as (or better than) Ertz? It may seem like a stretch, but the numbers suggest otherwise.

Josh Richardson, acquired in the offseason in the Jimmy Butler sign-and-trade, hasn't put up any big numbers in his first season with the Sixers but some of that's to be expected moving to a team on which he suddenly becomes the fourth option on the offensive end of the court. Overall, Richardson's addition has been a positive one for the Sixers as he's brought a varied skillset to a team that has a group of guys that each seem to have a very particular set of skills. Richardson, on the other hand, can do a bit of everything, from shooting to creating his own shot to running the pick and roll to playing pesky defense (and sparking the offense that way).