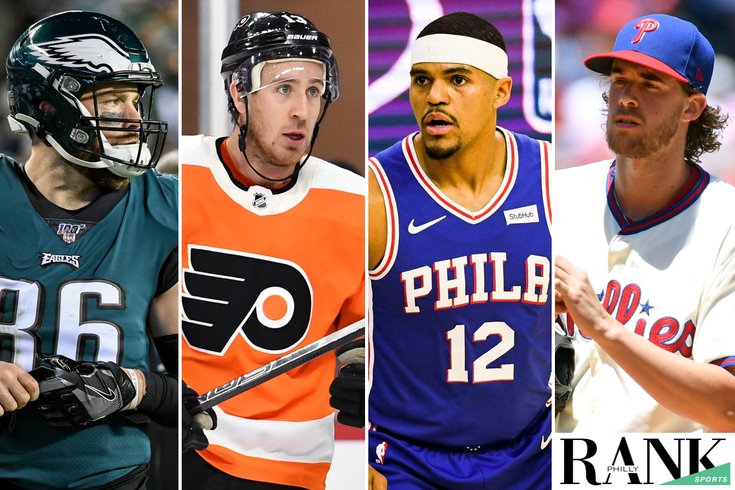 Zach Ertz, Kevin Hayes, Tobias Harris and Aaron Nola all check in in the teens in this edition of PhillyRank.

Before getting into the rankings and thousands of Philadelphians telling us we're wrong, we should first spell out our methodology and how we arrived at the below list because well, there's not much else going on at the moment.

Now that we all know the rules, let's continue with the 2020 edition of PhillyRank. We are getting closer to the top 10, as we take a look at the players who measure up in the 20-11  positions:

It seems like Voracek, the Czech-born Flyers' winger is always smiling, and always among the NHL's leaders in assists. As usual, in 2019-20, Voracek is in the top 20 in helpers and leading all Flyers skaters. With just 13 games remaining (should the NHL finish its regular season), Voracek looks like he'll finish shy of the 20-goal marker he's eclipsed in each of the last three seasons. Still, he's a valuable veteran voice and an anchor on the Flyers top line.

It's hard to remember the last time the Eagles had a solid cornerback situation (Lito Sheppard and Sheldon Brown?). After swapping two draft picks with the Lions last month, the Eagles are hopeful that the 29-year-old veteran is the answer at a position that has been positively dreadful in recent seasons. Slay will roam the outside and look to add to his 19 career interceptions in 2020 and could be called upon to shadow the opposing team's top receiver wherever he lines up. Slay has been a very healthy player throughout his career, missing just six games in six seasons as a regular starter.

When the Flyers got red hot, so did Hayes, who recorded nine points during the first seven games of the Flyers' nine-game win streak in February and March. He's also pitched in in some very unexpected ways this season, tallying an NHL-best (and career high) four short-handed scores. Hayes was an offseason acquisition for Chuck Fletcher and the revamped Flyers, and he's shown to be a worthy investment (so far at least) of his monster seven-year, $50 million deal.

Remember when Brandon Graham, a former Eagles first-round pick was labelled a bust? Well, he's certainly proven to be one of the most valuable players on the team in recent years, particularly after corralling 8.5 sacks and the ninth most tackles for loss (with countless more QB pressures) last season. Graham is a leader in the locker room and a versatile member of the Birds' impressive defensive line — a unit that has five players appearing in our top 50.

Sanders is a prime candidate to make a big jump on this list come next season, after breaking through during the latter half of 2019. He accumulated the most yards from scrimmage of any rookie and his shiftiness and speed makes him — at the very least — a potent speedy option as part of a starting running back tandem. He has the stuff to be a featured back in the NFL, and if the Eagles don't add another substantial piece to the running back room this offseason he may wind up carrying a lot more of the load in his sophomore season.

The Sixers shocked many when it was Harris, not Jimmy Butler who signed a max deal to stay in Philly this past offseason. Harris has not always played up to his potential while here, but he's shown he can score (usually) when called upon as he is the team's second leading scorer so far this season. His 36% rate from downtown isn't terrible on the surface, but he averages five three point attempts per game, most on the team, and often times his entire offensive game lives and dies by the three-ball.

Konecny has emerged as the Flyers' best goal-scorer and an offensive spark plug this season. He was the team's lone All-Star (yes, they had one All-Star if you can believe it), and has shown some real improvement year over year on the power play. Last season, Konecny had four assists with a man advantage. This season he has 18 of them, as his time on ice has increased to nearly 17 minutes per game. At 23, Konecny is the true bridge between the older veterans (like Voracek) and the up-and-coming talent (like Joel Farabee and Nolan Patrick). 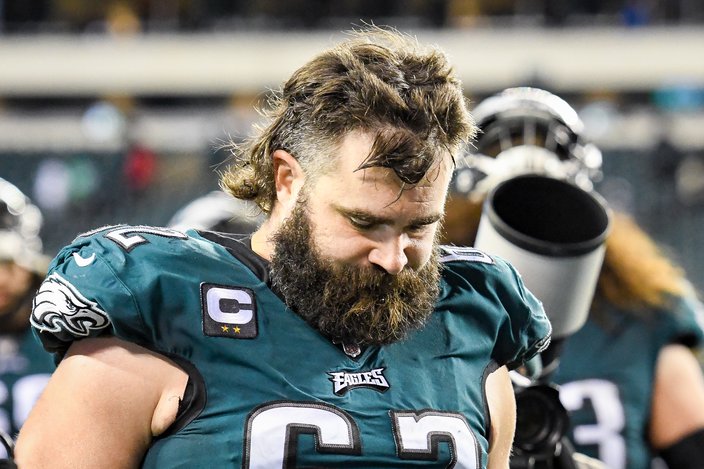 Kelce is one of the best offensive linemen in the NFL, and perhaps the best center in the game but still lacks respect. Ha was somehow first team All-Pro but not a Pro Bowler after the 2019 season. Go figure. Kelce is agile, reliable snapping the football and has somehow maintained relative health amid injuries to the left and right of him on the offensive line. Best known (now at least) for his Super Bowl parade speech, Kelce is a player likely to retire before he reaches his late 30s, but the Eagles should hope he sticks around as long as possible.

Ertz had a record-setting season in 2018 and then took a step back in 2019 — perhaps that is to be expected after breaking the record for most catches in a season by a tight end. Still, that slight decline is part of the reason why he is outside the top 10 on our list. He is a top 3 tight end in the NFL, but as at many positions in football, age 30 for a tight end is usually the tail end of one's prime. Ertz is closing in on that fast. He is a good blocker and a reliable target for Wentz but could find himself a free agent when his contract expires next year, with Dallas Goedert proving to be a potent option alongside him.

At his best, Nola is a top 10 player in Philadelphia, but he was unable to replicate his near Cy Young season last year. Still, he was the best Phillies' pitcher by a wide margin in 2019 and projects to be their ace again in 2020. Nola has emerged as a strikeout artist in recent years, and he's very comfortable working out of jams as he was able to do several times in 2019 to keep the Phillies in tight games. It is unclear how the extended offseason will effect Nola — or other MLB pitchers — but at 26 he is in the midst of his prime and is playing on a below-market contact (just $8 million this season), and is one of the Phillies' most valuable commodities.