Who, or what, is that ginormous creature that shows up at block-tidying efforts across the city? 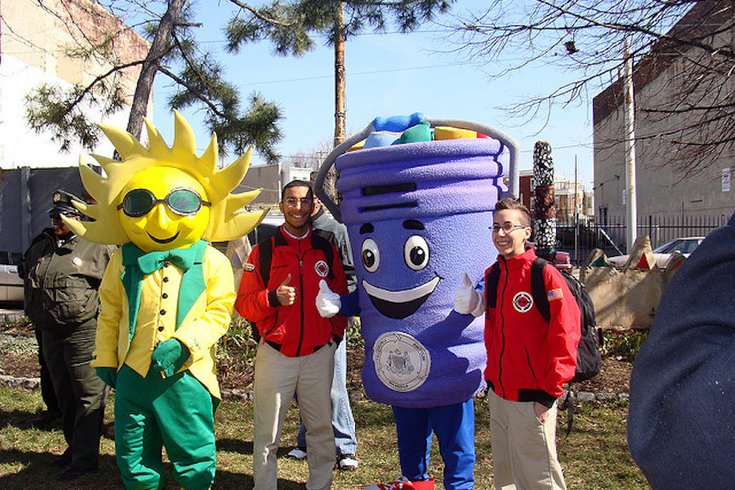 'Sun Ray' (left) is the Philadelphia More Beautiful Committee's mascot. But what do we really know about him or her? Spoiler alert: Not very much.

We have a lot of mascots in Philly.

On the leading end of the mascot world is the Phillie Phanatic, the bawse of the genre. The St. Joe's Hawk isn't too far behind on account of its persistent flapping, with Swoop and Franklin in the mix.

They are all cute. Heck, I entrusted Franklin with the care of my son for a few glorious moments in 2016.

That mascot cuteness even extends outside the sporting world and into the recycling realm courtesy of the city's Curby Bucket who encourages us all to recycle.

Bucket was in attendance at a City Hall press conference held last week to hype the 11th Annual Philly Spring Cleanup effort. Theme of the April 7 event: "Beautifying our City together one block at a time."

This event is laudable, but I noticed a disturbing undercurrent when I caught a couple seconds of video from Mayor Jim Kenney's press conference. You can see it in the photo below:

What fresh hell is this nightmare fuel next to @PhillyMayor? pic.twitter.com/EaYbFL5LeJ

That freakish creature you see behind the mayor goes by the name of "Sun Ray." He is apparently the Philadelphia More Beautiful Committee's mascot.

In America's creepy-clown era, I'm not so sure it should be trusted. It strikes me as the offspring of that evil clown from "Poltergeist" and something hiding in the basement, subsisting solely on psychedelic mushrooms, at Willy Wonka's Chocolate Factory.

Just LOOK at that thing. It hides its eyes behind huge sunglasses, has a Joker-like smile painted on its face (Heath Ledger rendition, of course), purports to be the hottest thing in the universe and wears green pants. Nobody should wear green pants unless they're Eagles-variety Zubaz.

Plus, Sun Ray – if that is his real name – has a spotty online track record.

He showed up at a West Passyunk Point Community Fair in 2008 and a recycling event in 2009. That same year, he or she lulled both civilians and police officers into acceptance through a hypnotizing dance.

The "horrifying" Sun Ray turned back up in 2012 at a PMBC "rally," a non-descript Twitter photo in 2014, the grand opening of a trash drop-off center in 2015, a block-captain rally in 2017 and last week's clean-up announcement.

But what do we really know about Sun Ray? Very little, that's what. So, this week, I embarked on the pursuit of answers.

As could be expected, Sun Ray ducked the chance to defend himself.

McCarty-Skelton did, however, put me in touch with PMBC Adminstrator Dawn Woods, who offered a recap of Sun Ray's involvement in clean-up efforts, including the upcoming block-captain rally slated for Saturday at the Pennsylvania Convention Center.

"This is the first time I've heard an adult with this kind of response to Sun Ray," Woods said with a laugh that felt well deserved.

That's not to say I am alone in my impressions, though. Woods noted that children are sometimes taken aback by the ginormous creature.

"Sun Ray is not invited to as many events as Curby Bucket, but the kids love Sun Ray. He dances with the kids," she said. "Some of the kids shy away. It could be the head circumference. Some are freaked out by mascots anyway.

"For every kid that gets freaked out, there's one who just won't let Sun Ray go away. There's always one who attaches to Sun Ray, holding his hand, going wherever he goes."

As for the back story, it's more in-depth than the online trail let on.

According to Woods, Sun Ray came to PMBC on August 1, 2007 and was recently the recipient of an updated costume, price-tag unknown.

"He stands about 6-feet 3-inches tall and his head is very big," she said. "The new costume is very close to the old one."

Still laughing at my initial reaction, Woods countered that "Sun Ray brings bright yellow rays of light to all the neighborhoods he visits."

And those neighborhoods are plentiful. Not only are there four PMBC events annually, but he's involved in "welcome wagons" for new block captains and Saturday clean-ups across the city.

"He also comes out on our clean-block contests on 25 blocks throughout the season," Woods said, noting that not only will Sun Ray be at Saturday's event but the mayor, city council member, 50 exhibitors and the West Powelton Steppers will be, too.

She sold me on the fact that Sun Ray is not an evil entity over the course of our conversation. But are there any dangers inherent in his appearance?

"We usually have a tool-room guy wear it. He needs a handler," she conceded. "He can see through the costume, but can't always see where he's stepping."

So, yes, you still need to be careful around Sun Ray, folks.