PhillyVoice's 'This Week in Philly' Quizzo round (April 1-8) 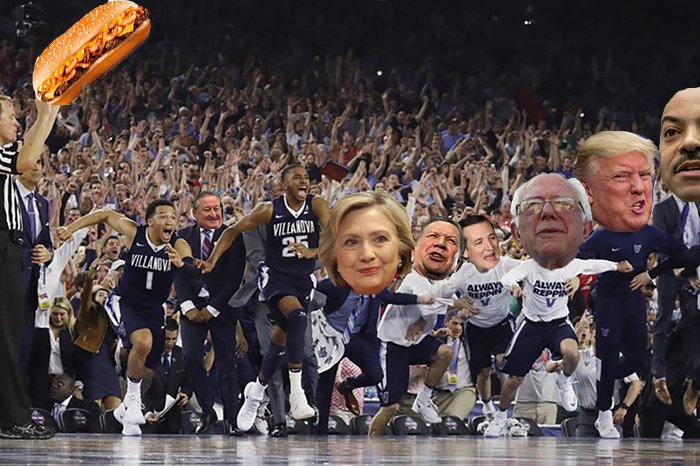 Several people referenced in this week's PhillyVoice Quizzo round appear in this photoshopped image.

As previously mentioned, we here at PhillyVoice have decided to update – well, transform – our Quotes of the Week quiz into a weekly Quizzo round based on happenings from the previous seven days in, and around, Philadelphia.

This week marks the first stand-alone post in that effort. Answers appear at the bottom of the page but, who knows, maybe it’ll turn into a contest of some sort in the future.

With no further ado, here’s this week’s PhillyVoice Quizzo round …

1. Who hit the championship-winning shot for the Villanova University men’s basketball team on Monday night in Houston, Texas?

2. What four local breweries were named to the Brewers Association’s Top 50 breweries list based on sales in 2015?

3. Animal-control officials in Teaneck, New Jersey, plan to distribute air horns to help the public humanely scare away what creatures?

4. According to Nielsen, 14.2 million viewers watched the season-finale cliffhanger of what cable television series last week?

5. Who won the Democratic and Republican primaries in Wisconsin on Tuesday night?

6. Philadelphia Mayor Jim Kenney announced that what information about all city employees is now available online?

7. What charges did District Attorney Seth Williams say former Eagles running back LeSean McCoy would face after a February brawl with off-duty police officers at an Old City club?

8. What famous comedian tested out new material at a pair of shows at Helium Comedy Club this week?

9. What fast-food chain recently unveiled, for a limited-time only, the “Philly Cheeseburger”?

10. Democratic presidential candidates Hillary Clinton and Bernie Sanders spoke at the Pennsylvania AFL-CIO Convention this week. What does AFL-CIO stand for?

Bonus Question (Who said this "Quote of the Week"?): "I'm human. I hurt like you. I hurt the same way you hurt. When somebody says something about me that's not true, that s--- hurt."

10. American Federation of Labor and Congress of Industrial Organizations