Steve Keefe refined his dough recipe during the COVID lockdowns. The outcome? Phly Pies, a business that will operate out of the Exit4 bar this summer 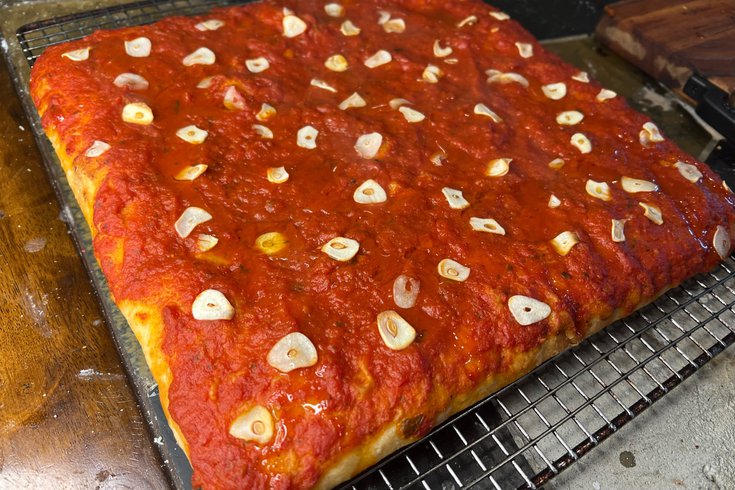 Steve Keefe, owner of Phly Pies, is opening a tomato pie shop at the Exit4 bar in Wildwood this summer. He plans on holding a soft opening the last weekend in June.

If you asked Steve Keefe a few months ago what he thought he'd be doing this summer, opening up a tomato pie shop at the Jersey Shore would not have been within the realm of possibilities.

However, that's exactly what the South Philadelphia resident is doing. He recently took a 10-hour, round trip drive to Lake George, New York to pick up a 60-quart Hobart stand mixer, which he will use to make his airy, focaccia-like dough at the Exit4 bar in Wildwood.

Keefe never had any intention of turning his hobby into a full-blown business, but like it has for so many other things, the COVID-19 pandemic changed that.

Making tomato pie has been in Keefe's family for generations. He grew up in Lower Merion Township and comes from a long line of Italian matriarchs who used food to convey affection. He often found himself cooking alongside them, learning recipes that have been handed down through the decades.

"Two of my great aunts lived with my grandparents their whole life," Keefe said. "They were always rolling pasta and making pizza in the basement. So, a lot of that wore off on me."

A bartender by trade, Keefe began baking more frequently during the lockdowns brought on by the public health crisis. He continually experimented with his dough recipe, testing out different types of flours, fermentation periods and hydration levels until it was exactly how he wanted it.

He mostly took inspiration from his family's recipe, but he also consulted 'Mastering Pizza' by Marc Vetri – someone who would later inspire Keefe to take the next step with his operation.

Once Keefe nailed down his process, he started handing out pies to friends and received an unexpected amount of positive feedback. Word got around and he soon was getting messages from people who wanted to try his product. He began holding raffles on Sundays through his personal Instagram account, giving pies to the first 10 people who requested one.

Keefe recognized that an opportunity was presenting itself, but he was only getting his pies into a few mouths at a time. Since he was still using a conventional oven in his rowhome, he had to come up with a way that would help him get as much exposure as possible while feeding a limited number of people.

Making use of his ties to the restaurant industry, Keefe decided to take a couple of pies to Vetri Cucina, the celebrated Spruce Street institution owned by Marc Vetri. He gave them to the staff before their shift.

He got the reaction he was hoping for.

"The chefs asked me where it came from and I told them I made it. They were like 'Get the f*** out of here!' and I told them I was serious," Keefe said. "It was like, alright; these guys are some of the most talented chefs in the city and they're telling me that I've got something here."

Motivated by the enthusiasm from Vetri and his crew, Keefe moved on to other restaurants in the city, delivering pies to Fiorella in the Italian Market, as well as Ember & Ash and River Twice on East Passyunk Avenue.

Things quickly gained traction from there, due to the employees sharing pictures and videos on social media – which is exactly what Keefe wanted.

"The response was pretty overwhelming," Keefe said. "I was getting follows and requests from people to do pop-ups. I was just getting inundated with messages."

Due to his overflowing inbox, Keefe figured it was finally time to create an Instagram account for his business. He settled on the name Phly Pies, a double entendre that he said reveals Philadelphia's influence and shows his pie is "… the new kid on the block. It's cool and it's square, so naturally a little 'edgy' … It's fly!"

After holding a few pop-ups at Her Place Supper Club, Pub & Kitchen and Trattoria Carina, Keefe was approached by a friend who works for a development group in Wildwood. The company purchased property that they are going to renovate after the summer, which happens to include a bar with an attached pizza shop, and asked Keefe if he wanted to take it over for the season.

Since he already spends his summers on the barrier island bartending, Keefe saw the offer as the perfect chance for a trial run and gladly accepted.

"Being able to kind of scale up and get into a commercial space with an actual pizza oven is a win for us," Keefe said. "Breaking even this summer would be a win as far as we're concerned."

Keefe said getting ready to open has been pretty seamless so far. The bulk of the work has consisted of sourcing quality ingredients, vetting purveyors and acquiring the equipment that he needs.

If everything goes according to plan, a soft opening is scheduled for the last weekend in June. Keefe doesn't intend on giving up his bartending gig, so the hours will most likely fall somewhere between midnight and 4 a.m. It's the perfect time frame to catch the bar crowd as they stumble home, craving something doughy and greasy to soak up all of the alcohol.

As for the future, Keefe said he would like to keep doing something similar back in the city during the fall and winter. He mentioned the possibility of opening his own shop at some point, but wants to start off with a few more pop-ups or maybe even a food truck.

Keefe just doesn't want to bite off more than he can chew, but considering the progress he already has made, it seems like he can handle anything thrown his way.

"Every day goes by and I still don't know if this is all going to pan out the way I want," Keefe said. "But, I gotta give it a shot, right?"