Brian Dwyer claims it all started to go bad when he was told: 'You had a son, when you shouldn't have had a son' 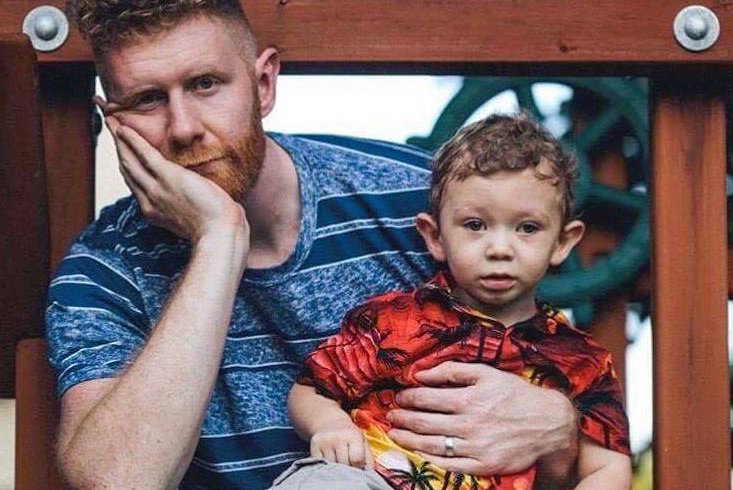 Brian James Dwyer (seen with his son, Waldo) says he is planning to sue Pizza Brain in Fishtown, the restaurant he helped found.

He has tattoos to prove it.

But what he doesn't have anymore is a job at the award-winning pizza parlor he helped create. He also lost his own collection of pizza memorabilia, called the world's largest by Guinness World Records.

That's not how he wanted it to be.

Dwyer, 32, recently moved across the country to live in a state where medical marijuana is legal and available, so that he can continue to be able to care for his infant son, Waldo, who has a rare form of eye cancer being treated with cannabis oil. (Pennsylvania has its own law on the books, but full implementation is about 18 months away.)

On Thursday, Dwyer talked from Bellingham, Washington, about his reasons for moving out of Philadelphia, the falling out that led him to leave behind the restaurant he still co-owns and his world-record memorabilia collection, as well as the lawsuit he plans to bring against his fellow Pizza Brain owners.

But, how did Dwyer, who, by his own admission, had become synonymous with the "pizza party" atmosphere and the shop that is named in his honor — the "brain" in Pizza Brain comes from a transposition of two letters in his first name — become so disillusioned with the business?

It all started, he said, when Waldo was born.

'YOU SHOULDN'T HAVE HAD A SON'

Several months after the birth of his son, around Christmas 2014, Dwyer said his fellow owners of the popular Fishtown restaurant called a meeting to discuss his "commitment to the restaurant."

At the time, Dwyer was working as many as 60 hours a week at the artisan pizzeria at 2313 Frank­ford Ave. and living in an apartment above the restaurant with his wife, Danielle, and son. By his own admission, he was spending most of his nights and weekends in the hospital with Waldo as he was just beginning to learn about his son's condition.

"I feel like I'm suing myself... But, I'm the owner of a business that I've been cut out from. How should I proceed?" — Brian James Dwyer, Pizza Brain principal

"I lived above the shop since it opened," he said. "My soul was in that business."

In fact, he said, when Pizza Brain launched in 2012, Dwyer said he became a de facto mascot of the business. His memorabilia collection fostered the pizza museum housed in the restaurant.

Dwyer was thrust into the spotlight, a position that he appreciated but was not necessarily prepared for, he said.

Along with happily talking when the media came calling and meeting people in the neighborhood, Dwyer helped build the shop and did everything at Pizza Brain "from cooking to cleaning the toilets," he said.

"People know me as the guy who was always there busing tables and making it run," he said.

Yet, at that winter meeting, he said, his commitment to the business was questioned. Still, Dwyer said he listened earnestly to his business partners – Michael Carter, Joe Hunter and Ryan Anderson – until a comment was made about his family.

"Someone said, 'You had a son, when you shouldn't have had a son,'" Dwyer recalled. "After that, I didn't know how to navigate that conversation... It's like they were married to this image of me."

After that meeting, Dwyer said, his relationship with the fellow owners became strained. Dwyer said he started going to fewer business meetings. Instead, Dwyer said he focused on caring for his child and continued putting in as much as 60 hours a week at the restaurant, focusing on the day-to-day operation of the restaurant and managing Pizza Brain's social media accounts.

"I said I'm just going to work on the marketing, work in the shop and focus on being a pizza man, because I can't be a businessman right now," Dwyer said.

After about three months, Dwyer said he was brought in for another meeting. This time, he claimed, his fellow owners decided to cut his pay in half.

'I WAS STILL TRYING TO KEEP MY HEAD UP'

It was a tricky place to be in, because even though the restaurant's name, concept, names of each pizza and the memorabilia collection were all contributed by Dwyer, he said he was only ever a minority owner in the business. Dwyer said he signed paperwork early on stating he owned 15 percent of the business, but that different paperwork had been signed since then. His lawyer wants his share of the business valued at 25 percent.

After the pay cut, Dwyer said, he was stressed. Waldo's health care costs weren't going away and he claimed the apartment they lived in above the restaurant leaked and black mold was building in the walls.

"I was still trying to keep my head up," he said. "I didn't argue... I was always a minority owner. I never was the main guy."

By the spring of 2015, Dwyer said he decided to move his family out of the apartment above Pizza Brain to his mother-in-law's house a few blocks away.

"That was the first time in four years that I hadn't lived above the pizza shop," he recalled. "I told them I needed to live somewhere where I wasn't always at the beck and call of the business, somewhere where there wasn't music coming through the floors where my son was trying to sleep."

When he moved, Dwyer decided he would continue doing public relations for Pizza Brain but stop working at the shop. He figured with his pay cut in half and no longer being involved in the business meetings, he decided to focus on his family.

Then, after he came forward in April about his son's condition — and controversial medical treatment — Dwyer said he found himself cut off from the restaurant altogether.

He hasn't received a paycheck since July.

Since then, Dwyer said he hired a lawyer and reached out to Pizza Brain. He said Thursday that he hasn't heard from the restaurant since his lawyer, Jordan Rushie, contacted them in July in an effort to determine the value of the business, so that Dwyer could be bought out.

But he's since heard nothing but "radio silence," and now he intends to sue in order to separate from the company, Dwyer told PhillyVoice.

"I don't really blame those guys for acting the way that they did," he said of his three co-owners. "And I don't want to make a stink...I don't want anything bad to happen to [Pizza Brain]."

When he left for the West Coast, Dwyer said he left the pizza memorabilia behind, and he hopes to come to some kind of agreement to allow the restaurant to keep the collection.

"I have receipts for all the s**t I've collected and my partners don't seem to want to acknowledge that," he said.

"We are concerned with how Brian is coping with Waldo," – Michael Carter, Pizza Brain co-owner

Carter, one of Pizza Brain's co-owners, refused to discuss any possible lawsuit with PhillyVoice. He also wouldn't comment on Dwyer's claim that he hadn't been paid in months.

Dwyer was still listed as an owner of Pizza Brain, said Carter, though he expressed concerns about Dwyer's ability to handle his son's disease.

"We are concerned with how Brian is coping with Waldo," said Carter, who sought to discuss issues between ownership only if it was kept "off the record."

"We are most concerned with how he's coping with it and how he has coped with what he's doing and why he's going to the media," is all Carter would say on the record.

Contacted Friday, Pizza Brain's lawyer, John Law, refused to comment on the situation between Dwyer and his fellow owners. Law would not confirm, nor deny, Dwyer's assertion that Pizza Brain had been contacted by Rushie.

"I'm not going to say one way or the other," Law said.

(After PhillyVoice talked with Law on Friday, Rushie said the parties had agreed to meet this week to determine how to resolve the feud without going to court.)

After six years in the business, Dwyer said that he has mixed emotions about where things stand.

"I feel like I'm suing myself," he said. "But I'm the owner of a business that I've been cut out from. How should I proceed?"

Dwyer said he loved Pizza Brain and the people he met while working and living in Philadelphia. Initially, Carter was a partner who helped him bring Pizza Brain to fruition, he said.

But people and priorities change, he said, and he's ready to move on.

"Pizza Brain isn't just a business. It was a person. It has a spirit that I carry with me," he said.