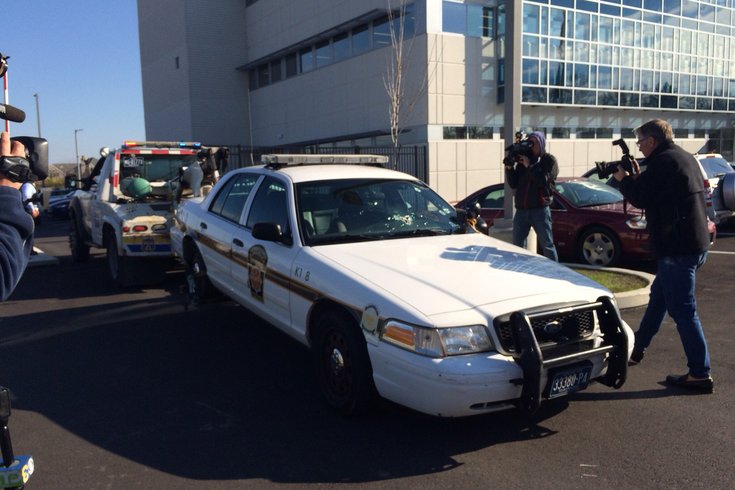 The state trooper patrol car involved in Tuesday morning's pursuit of suspects on the Vine Street Expressway is returned to Troop K's Belmont barracks in Philadelphia. Bullet holes marked the windshield of the trooper's car.

Police tracked down on Thursday the final person of interest in connection with the shooting of a Pennsylvania State trooper earlier this week, NBC10 reports.

Kaymer Lewis was believed to have been in the car during Tuesday's altercation that began with a police pursuit on the Schuylkill and Vine Street expressways and ended in a fiery crash with a school bus.

Police said Lewis was not considered a suspect in the shooting of Trooper Patrick Casey, who was shot in the shoulder, allegedly by 17-year-old Giovanni Cotto, after the crash.

Philadelphia Police reportedly tracked down Lewis in a store in North Philadelphia after receiving a tip. He was arrested on an outstanding probation warrant, NBC10 reports.

Lewis was being questioned as a witness to the shooting. Police said he was cooperative.

Cotto was charged with shooting and injuring Casey. He was arraigned on charges Wednesday morning and his bail was set at $3 million.

Casey, 31, was released from Hahnemann University Hospital on Wednesday.