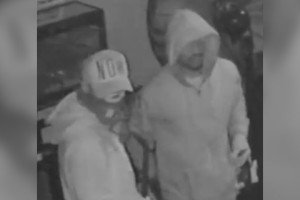 Philadelphia police are seeking three men who allegedly burglarized a bar in Brewerytown after breaking through a wall from the vacant building next door.

Three men broke into a Brewerytown bar by smashing a hole into the business' wall from a vacant property next door, Philadelphia police said.

According to police, at some time between 1:45 a.m. and noon on March 8, three men gained entry into the Tropicana Bar at 1559 N. 29th St. by breaking a hole in the wall of a vacant building adjacent to the business.

Police said that once the three men were inside, they stole an undetermined amount of cash from registers, a change machine and an ATM in the bar, as well as a jukebox.

The men fled in an unknown direction after the incident, police said, and the only description that law enforcement officials provided was that one of them was wearing a distinctive baseball cap with the words "True Religion" on its bill and "Live for Now" printed on the top.