Video of messy fight has been viewed nearly a million times 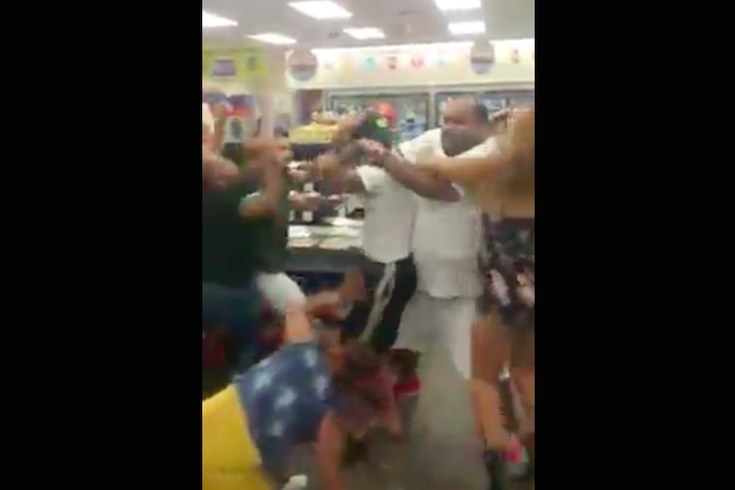 Philadelphia police have announced the arrest of two people in a chaotic melee that was captured on video last weekend at a Wawa in the Torresdale section of Northeast Philadelphia.

Barbara Bayona, 43, and Jonathan Rodriguez, 20, both of the 6400 block of Ditman Street, have been charged with multiple crimes connected to the dispute between a group of suspects and several Wawa employees and customers on Saturday night.

Authorities confirmed that the incident took place around 10:15 p.m. on July 29 inside the Wawa located at 6400 Torresdale Avenue. A three-minute video of the incident, entitled "Riot at Wawa," quickly amassed nearly a million views.

At 10:25 p.m., 15th District police officers responded to an initial radio call for a disturbance between some of those seen in the video and Wawa employees over the purchase of cigars. The group, however, had already left by the time officers arrived.

Later, at 11:39 p.m., 15th District patrol responded to a disturbance and vandalism at the Wawa committed by the same group and others. Once again, the group left before police arrived to find the store littered with goods that were thrown from their displays.

A police report estimated property damage at a value of $700.

Shawn Nichol, one of the victims of the brawl, told PhillyVoice that when he and his cousin arrived at the Wawa, they saw a group of people trying to "jump" an employee before proceeding to throw food off the store shelves. Nichol said he stepped outside to call police and then reentered the store to break up the fight.

During the course of the week, Nichol added that he's both been thanked and received threats for his involvement in the incident. Beyond "a few scrapes," however, he says he did not suffer any serious injuries.

Bayona and Rodriguez are both charged with riot, criminal conspiracy, criminal mischief, terroristic threats, disorderly conduct for fighting, and four counts each for recklessly endangering another person, simple assault and harassment.

Video of the incident can be viewed below (Disclaimer: Video contains explicit language):