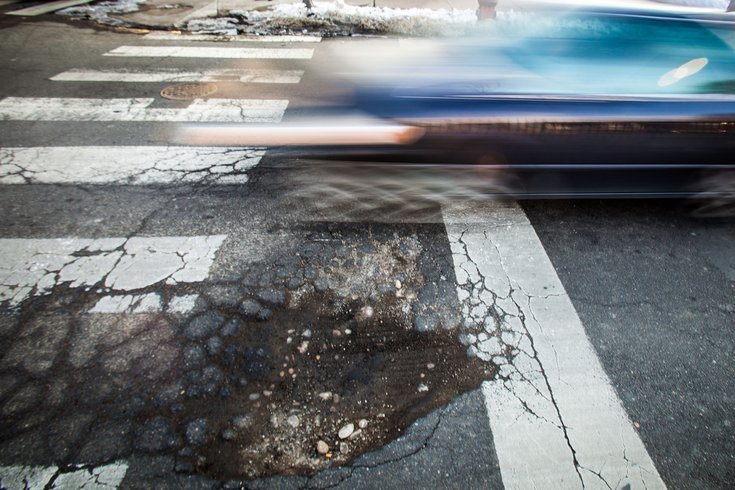 The war against potholes in Philadelphia, worsened by a winter full of wild weather fluctuations, received a bit of a boost earlier this month when the city announced the arrival of paving season.

As anyone familiar with this meme knows, the war is widespread.

That's why Pennsylvania Gov. Tom Wolf announced on Thursday that reinforcements are on the way. The governor's office used the word "attack" to reveal a $180 million package for pothole repairs, interstate resurfacing and preservation and other transportation infrastructure projects.

“PennDOT has been at work on this problem for many months, but the severe temperature swings through the winter have created ideal conditions for continued pavement challenges,” Wolf said. “We are further increasing our focus on pothole repairs and also accelerating much-needed work on our interstates.”

An initial $22.3 million has been prioritized for immediate pothole repairs through June 30, accounting for about 30,000 tons of patching material. Another $7 million will be invested in seven interstate maintenance projects to cover potholes and other repairs on 78 miles of roadway by year's end.

Most of the projects will be financed using funds saved from other initiatives since Wolf took office.

By the end of April, PennDOT crews had burned through nearly 23,000 tons of asphalt for pothole repairs statewide. At the same pint in 2017, that number was 15,418 tons of asphalt.

“We have improved thousands of miles of roadway in the past three years and we continue to battle potholes across the state each year,” PennDOT Secretary Leslie S. Richards said. “These investments will address much-needed repairs and preserve several stretches of interstate.”

Drivers can report specific highway potholes to PennDOT using the toll-free (800) FIX-ROAD hotline. More than 12,365 pothole concerns have been reported to PennDOT in 2018 and approximately 96 percent of them had been addressed as of May 21.