Power Rankings: Rating the Eagles' seasons over the last 15 years 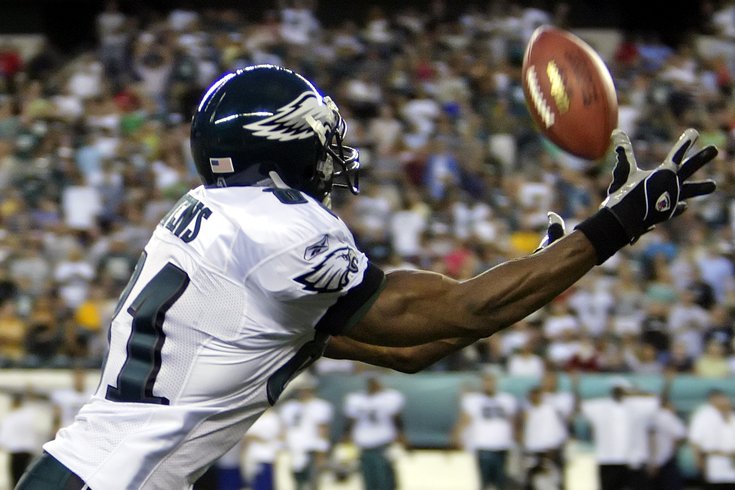 Terrell Owens was part of the best of teams .. and the worst of teams.

There have been 15 seasons of Eagles football in the new millennium. Most of them were pretty entertaining, but obviously none of them resulted in a Lombardi Trophy. Let's rank those 15 seasons, from most enjoyable to least enjoyable.

That was the moment you immediately knew the season was going to be special. And by the way, look at the throw by Donny Mac there. He has a blitzing Ed Reed charging at him, and he lofts an effortless deep ball 40 yards down the field and to the sideline that is absolutely on the money.

There were so many great moments during the 2004 season: Owens mocking the Ray Lewis dance, McNabb's 14 second scramble against the Cowboys, and of course, Brian Dawkins' post game NFC Championship speech:

But ultimately, the Eagles lost to the Cheaters in the Super Bowl. 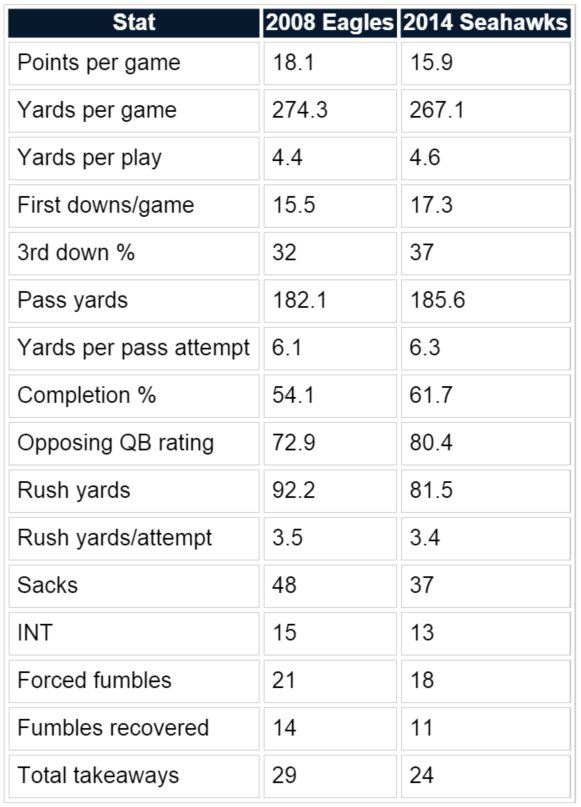 The highlight of that Eagles D was Week 3, when Jim Johnson's swarming group beat the living crap out of Ben Roethlisberger, sacking him nine times before knocking him out of the game.

But ... this season wasn't without its many downfalls. This was the season that revealed that Donovan McNabb didn't know games could end in ties after the Eagles finished at a 13-13 deadlock against what was a bad Bengals team in one of the most boring games I've ever watched. The following week, McNabb was benched at halftime against the Ravens in favor of Kevin Kolb. It was also the season DeSean Jackson celebrated a TD too early, dropping the ball at the one yard line against Dallas (although the Eagles ultimately scored anyway).

Entering Week 17, the Eagles' playoff hopes were all but cooked. They needed the 13 point underdog Raiders to beat the Bucs, and the Texans to beat the Bears during the 1pm games. Miraculously, both came through for the Birds.

And then, during the late afternoon games against Terrell Owens and the Cowboys, with their season revived... 44-6!!!

The Eagles took care of the Vikings in the Metrodome in the first round of the playoffs, before dispatching of the reigning Super Bowl Champion Giants, which led to this classic meltdown by this Giants fan (NSFW-ish):

Even the NFC Championship Game followed the up and down nature of this season. The Eagles were down 24-6 at the half to the Cardinals, before storming back to take a 25-24 4th quarter lead. But alas, that talented Eagles D couldn't stop Kurt Warner from leading a late TD drive, and the Eagles O couldn't mount a late drive of their own. In the end, the Eagles were once again NFCCG losers.

2001 marked the first of four consecutive division titles for the Eagles, as well as the first of three consecutive NFC Championship Game appearances. However, of the three consecutive NFCCG losses, the Eagles' loss in St. Louis to "The Greatest Show on Turf" was the easiest to swallow because they went toe-to-toe with the reigning champs. Unlike the previous year, however, when the Eagles showed promise making it to the playoffs for the first time since 1996, they had clearly become the best team with the best quarterback and the best defense in the NFC East.

And although the offense still didn't have any major weapons in the passing game, with James Thrash and Todd Pinkston serving as the two starting wide receivers, this Eagles team often won emphatically, beating eight opponents (including the playoffs) by at least two touchdowns.

This was to be a "building block year." Unfortunately, the Eagles' playoff growth would stall until 2004.

By 2003, the regular season wasn't a matter of whether the Eagles were going to win the division or not. It was more about whether or not they'd get home field advantage throughout the playoffs, which they clinched for the second consecutive season. After losing in the 2002 playoffs in devastating fashion to the Buccaneers, it almost felt like you just wanted to fast forward to the playoffs again.

But it wasn't easy early on. The Eagles dropped their first two games, and were staring a 2-4 record in the face, when this happened:

That wasn't the only "miracle" that occurred that season. After winning 10 of 11 to close out the regular season, the Eagles were down big early to the Packers at home in the playoffs, before coming back and converting a 4th and 26 along the way:

The euphoria of that thrilling win was short lived, when Panthers rookie corner Ricky Manning Jr. dominated Todd Pinkston and Donovan McNabb all day in the NFCCG. The Eagles scored a measly three points, and Andy Reid was coaching in the Pro Bowl for the third straight year.

The 2010 season started off with Kevin Kolb at the helm until Clay Matthews ended him in the first quarter of the first game. From there on out, it was Michael Vick's show, or rather, he put on a show, finishing second in MVP honors to Tom Brady.

There were two extraordinarily memorable games during the 2010 season, First, the "Monday Night Massacre," which was extra satisfying after the Redskins' LaRon Landry was running his mouth during pregame warmups:

And obviously, "Miracle at the Meadowlands III."

But with the Eagles competing for a possible first round bye in the playoffs, the heavily favored Eagles dropped a weird Week 16 game to the Joe Webb-led Vikings on "Tuesday Night Football," and would eventually be first round playoff casualties to the Packers.

That first game at FedEx Field under Chip Kelly was crazy. The Eagles' new fast-paced offense ran a ridiculous 53 plays in the first half alone on their way to a dominant opening game win over the reigning NFC East Champion Redskins. But the excitement was quelled by five losses in the next seven games.

Then "Nick Foles in Oakland" happened, and the Eagles finished out the season 7-1, which included a win in somewhat of an "NFC East Championship Game" over the Cowboys.

The Eagles' offense in Chip Kelly's first season was awesome: 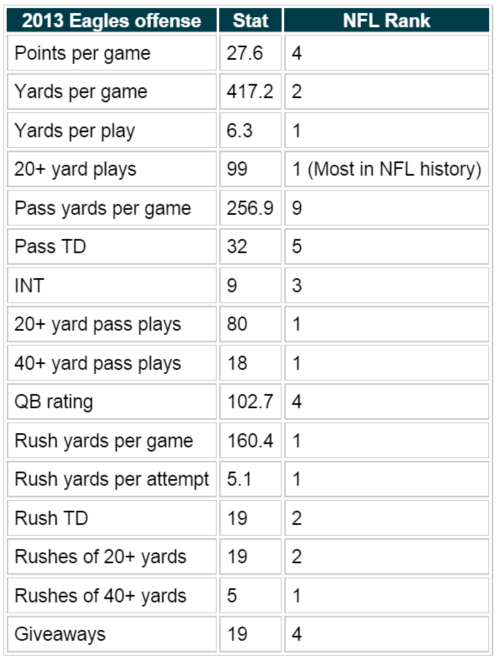 But not awesome enough in the playoffs, when they fell to Drew Brees and the Saints.

The 2000 Eagles started out the season with an onsides kick in Dallas that the Eagles recovered, and went on to absolutely obliterate the Cowboys to the tune of 41-14 in blistering heat. With the help of pickle juice, the Eagles ran for over 300 yards that afternoon, and Eagles fans once again had hope after three terrible seasons in which the Eagles had averaged 4.7 wins: 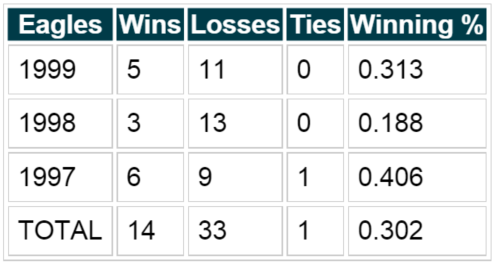 This was hardly a scary team. The Eagles' wide receivers were Charles Johnson and Torrance Small. Darnell Autry had the most carries at running back. A second year Donovan McNabb had less than six yards per pass attempt. But the defense was good, and they somehow won 11 regular season games, as well as a playoff game against the Bucs.

They would eventually lose in the divisional round to the Giants, but the balance of the NFC East was beginning to shift.

With Jeff Garcia at the helm after Donovan McNabb got injured, the Eagles rattled off five straight wins to close the season, and won a playoff game against the Giants.

The best moment from that season was Terrell Owens' first game back in Philly with the Cowboys, when this happened:

People seem to fondly remember this season because of the unlikely run the Eagles went on with McNabb out.

Who cares what happened the rest of this season? All I remember was this:

First there was the Jaccpocalypse, which began in early March, and concluded in late March, when "after careful consideration," the Eagles decided to release DeSean Jackson.

After careful consideration this offseason, Eagles decide to part ways with DeSean Jackson. The team informed him of his release today.

And then it was dead quiet until the season began. No Riley Cooper nonsense, no devastating ACL tears, no nothing at all really all throughout training camp. Through the first 12 games, the Eagles were winning, but hardly looked like world-beaters. They beat the teams they were "supposed" to beat, winning nine of those first 12 games, but struggled against quality opponents.

With the season on the line, the Eagles collapsed, losing three straight games to the Seahawks, Cowboys, and dumpster fire Redskins. The 2014 Eagles finished with 10 wins like they did in 2013, but regressed in many ways. We did a five-part series on where the 2014 season went wrong:

Just like in 2002, who cares what happened during the rest of the 2009 season? All that really mattered was losing the regular season finale to Dallas, and then once again in the first round of the playoffs. The awfulness of those back-to-back losses was epitomized best by Donovan McNabb's "fake confidence" air guitar heading out onto the field:

My friend Rob Walsh knew the season was over the minute he saw the air guitar.

"I remember it like it was yesterday," said Walsh. "Bar was on. The heat was on (in the party barn). Everything was good. I got the big screen television, four feet by eight feet. I had the kegs tapped, and we ordered all these chicken wings and all this other food. So McNabb comes out of the tunnel (doing the air guitar), and I look at (my friend) Ed, and go, 'Cancel the wings?' And he goes, 'Definitely. This game is going to suck.' So we canceled the wings, and... the game sucked."

After a long, awful lockout (Remember how much that sucked?) the Eagles went on a rapid-fire free agent splurge, signing Nnamdi Asomugha, Jason Babin, Vince Young, Ronnie Brown, Cullen Jenkins, Ryan Harris, Donald Lee, and the God-awful Jarrad Page. The one player the Eagles signed who is still with the team, Evan Mathis, was probably the biggest afterthought among the group.

Oh, and the Eagles thought it would be a good idea to name Juan Castillo defensive coordinator.

The defining moment of that season for me: 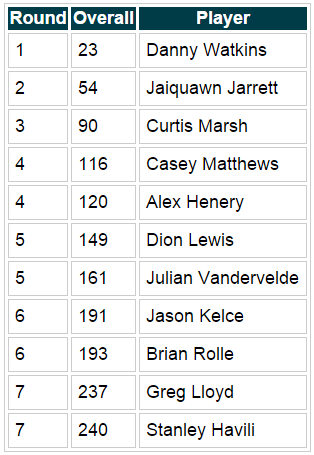 Barf. Training camp sure was fun, but what a disaster that offseason turned out to be.

A.J. Feeley almost beat the undefeated Cheaters, Winston Justice got beaten like a rented mule by the Giants, aaaaaand that's about all I really remember from this boring waste of a season. The 2007 Eagles were like the awful scene in Pulp Fiction in which Bruce Willis is picked up in the cab after his boxing match. In an otherwise great movie, it's painful getting through that scene. Less cab, more gimp!

In Pulp Fiction parlance, the 2007 Eagles were very ungimplike.

Everything this season touched died. It was a virus. I'm afraid to even type words about this season in fear that my fingers will just fall off.

Oh, what could have been. Terrell Owens started bitching about his contract, he fought Hugh Douglas in the locker room, a rift formed between McNabb and Owens, Owens was kicked off the team, and a hapless Mike McMahon finished out the season as the QB. This season marked the end of the Eagles' dominance atop the NFC East, with no rings to show for it.

You're the worst, Drew Rosenhaus.