Her mission: convince more women to give powerlifting a try

After countless health issues, a male-dominated sport helped Jessica Smith get and stay in shape 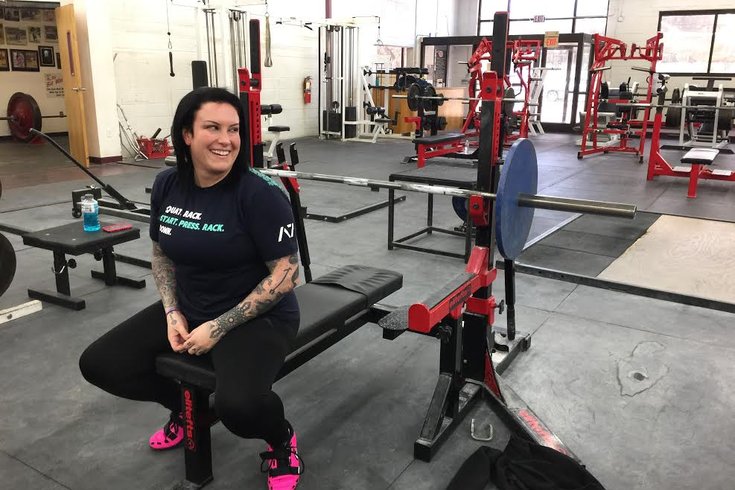 Jessica Cornell, the subject of a March 2019 story about working to get more women involved in the world of powerlifting, stands accused of organizing a December meet in South Philadelphia that has since been canceled. Registrants say she's refusing to offer refunds. She says she didn't cancel the event.

Inside Pulcinella’s Iron Sport Gym – a Chester Pike establishment billed as “Delco’s 24 Hour House of Power!” – Jessica Smith recently got to talking about a life that’s required more hospital visits than she can count off the top of her head.

Then, the “roller derby girl who’s also a fireman,” who recently dropped more than 100 pounds, mentioned her dual missions: to “get women powerlifting” and to change the image of dancers from “super skinny to strong and thicc.”

The latter comes from a sport she's recently picked up; the former derives from a passion developed when she was a little girl.

These biographical facts aren’t as divergent as one might think, as she explained over the course of an hour at the old-school Glenolden gym founded in 1995 by former powerlifter, professional strongman and Highland Games competitor Steve Pulcinella.

That sentiment becomes obvious as the 32-year-old shared the details of a life that once saw her fearing for longevity, but now has her on the path toward accomplishment in a sport – powerlifting – that many of her gender eschew, but some have started to embrace.

'OPEN ABOUT MY HEALTH ISSUES'

From there she's serving as the organization’s state chair for Delaware, and working with an elite dance company in Broomall, a path that was anything but easy.

And there have more medical concerns.

“Two weeks ago, I had a baseball-sized mass removed from my abdomen,” she said. “I also had my right hip rebuilt and pinned together because of the hip dysphasia.”

“I’ve been through more in 32 years than anyone will probably experience, and I still push through and still get the job done. If I can do it, anyone can.” – Jessica Smith

“Two emergency C-sections because both babies were two months premature,” she added, noting that it doesn’t bother her to share such personal details. “I’m very open about my health issues with all my athletes, friends and the public.

“I’ve been through more in 32 years than anyone will probably experience, and I still push through and still get the job done. If I can do it, anyone can.”

What Smith has done despite those laundry list of maladies is beyond impressive.

She’ll compete in the Delaware State Championships on April 7 – "I am on schedule to break several state and American records,” she claimed – and the bench-press nationals in South Dakota in August, which could stake a path to international competition.

Later this year, she’ll run a powerlifting meet at Preston and Steve’s Campout for Hunger.

She’s a coach, referee and Delaware State Chair for USA Powerlifting, which is the gateway for the Olympic-level International Powerlifting Federation.

She’s also an athletic trainer for the Touch of Class Dance Studio, where she started a program to teach young girls about “the importance of strength and being strong dancers.”

In other words, she does a whole heck of a lot.

Long a dancer herself, she turned to powerlifting in 2015 after having hip replacement. (The sport involves squats, deadlift and bench press.)

“I’m basically one of the strongest in the state!” the owner of The Iron Line Powerlifting declared, using a superlative earned through much hard work.

She’d started coming to this gym because the health issues left her concerned for her future. After the hip replacements and other medical procedures, she had gained weight and lost motivation.

“I knew I had to get myself back together or else I was going to die,” she said of launching an exercise-and-diet plan that paid off. “I lost 116 pounds in 10 months by literally busting my ass. I knew I had the tools to do this, I just wasn’t applying myself. It just took off from there, and here we are!”

She landed in the world of powerlifting, an athletic competition that doesn’t attract very many female competitors.

Of the 12,000 members of the federation, just 4,000 are women, she said. That disparity tends to steer females away, a trend she hopes to change by sharing her story.

“It’s uneven in that regard, and that’s crappy. It’s so intimidating for women if they don’t have any experience,” she said. “There are so many misconceptions about it, too. That the women look like men. Well, sure, if they’re taking something (like steroids or other performance enhancing drugs) they might.” 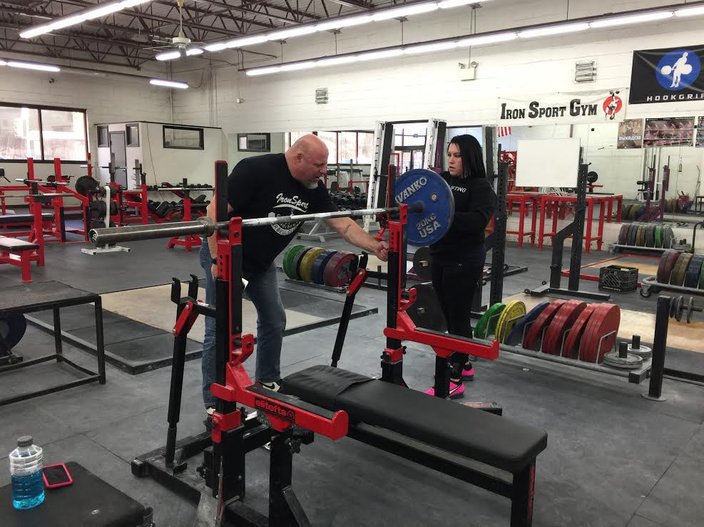 The upcoming competition will be her third. Last time, she finished dead last in her weight class, but she’d undergone surgery just six weeks earlier, so she wasn't discouraged in the least.

“It was so stress-free,” she said. “Sure, I finished dead last, but it was a total victory even just competing.”

She’s cagey about sharing the exact amount of weight she can lift, not wanting to tip off competitors. “I don’t feel the need to do that,” she said.

That made Pulcinella laugh, what with his impression that “everybody posts everything they’re doing on Instagram and social media.”

He jokingly referred to Smith as the gym’s “Frankenstein,” thanks to her voluminous hospital visits, but smiled when recalling the time she brought her newborn with her to the gym just a week and a half after delivery.

NEXT THRUST: GET WOMEN INTO THE SPORT

Women interested in getting involved in powerlifting should reach out to another woman with experience in the sport, said Smith, adding she didn’t and it set her back a bit.

Too many women are in the same place Smith used to be: "shy and too intimidated to ask for help.”

“Some feel like they’re not strong enough,” Smith said, adding a bit of advice to other women who may be intimidated. “Just go out there and do it. There’s no better way to get started.”

Pulcinella has noticed more women getting involved with the sport that’s long consumed his life, as well.

“A long time ago, it was a fringe sport, but it’s much easier to get involved now, there so much free – and good – information on websites, as long as you find the right websites,” he said. “You can teach yourself. It’s scale-able to everyone. If you can lift 100, if you can lift 50, there's a place for you. It’s not like the NBA when you have to be seven-feet tall. There are 8-year-olds and 89-year-olds doing this. Everyone can compete.

“Without a doubt, more women are involved today, and I think that’s mainly because of CrossFit. They see these bodies that the Crossfit girls have, not the burly man-bodies, and they’re not afraid of giving it a try.” 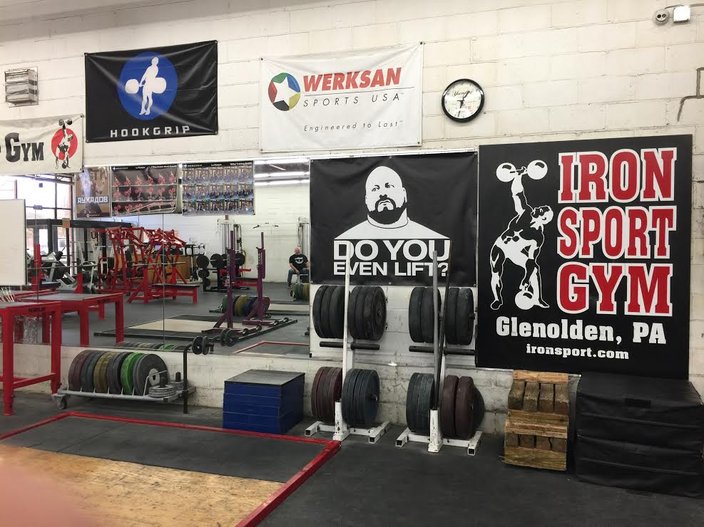 All it takes, he said, is breaking down initial fears.

“People can be afraid when they’re just getting started. ‘Will I get bulky?’ If a woman contacts the right person, the barriers just break down,” he said. “Lifters here are friendly. It’s inviting here. There’s nothing to be scared of.

"Outside, people are scared of the gym. It’s not a chain. We’ve been here 25 years, turning out lifters. People think it’s the big leagues. Women have never heard of it. They have no idea what it’s like until they walk in. Then, they fit right in.”

Just walking in several years back helped Smith turn her life around. Sure, dancing helped her lose weight and wean herself off of insulin, but it also inspired her.

“Powerlifting helped me mentally in the strongest way. I knew each time something went wrong healthwise that I had a physical goal to get back into shape,” she said. “It also helped me not only from a cardio aspect, but reminded me of my previous professional dancing career and how I could channel that winning spirit and energy into powerlifting.

“I am known by all my friends and family as getting right back into the gym. This could be bad or good! My passion and drive is so strong that I can’t just sit. I push forward and get right back into training.”