Website remakes itself to poke fun at ultra-conservative blogs 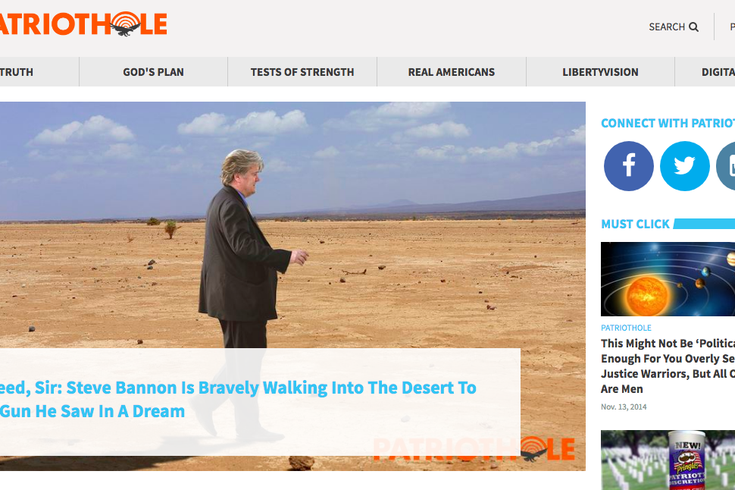 The homepage for PatriotHole, a satirical website aimed at poking fun at ultra-conservative media sites.

But ClickHole has gotten a makeover in the age of fake news.

The site, run by satirical news website The Onion, announced in a post Wednesday it was being revamped as PatriotHole, a sardonic version of ultra-conservative political blogs:

At PatriotHole, we vow to bravely follow the truth wherever we want it to go and share fringe bloggers who type the loudest AND the longest. We vow to boldly chase clicks of hero Americans and sell them aggressive, backwards-looking merchandise that would melt the skin clean off a communist. Simply put, PatriotHole is the content Thomas Jefferson would have read if he hadn’t drowned in a barrel of molasses. It’s not the easy course that we have chosen, but it’s the honorable course, and we won’t ever stop unless the clicks dry up.

The stooges of the Leftist Media conspiracy want to silence the hardworking, God-smooching Americans who make this country the greatest in the world and represent millions of dollars in untapped web traffic. Well, we won’t have it. PatriotHole refuses to stand by as good, loud, sleep-with-a-Bible-between-their-thighs Americans go unheard and unexploited for monetary gain. That’s our America Promise to you, which is like a normal promise but slightly better.

Some early examples of what PatriotHole's mockery of hysterical right-wing media will look like: A compilation of pictures of President Donald Trump not getting attacked by birds, therefore proving he is strong, and a "story" about how university scientists have developed a new method to steal more jobs.

For those familiar with the site, it'll just be different kinds of jokes. For those who aren't familiar and are easily duped by the likes of Andy Borowitz of The New Yorker, it'll probably mean some of them sharing PatriotHole articles and writing accompanying posts like "Wow! Big if true." or "Here's what the lame-stream media isn't telling you!"

I don’t mean to pile on our conservative readers: We've all seen someone share articles from places like Occupy Democrats and The Other 98%, sites that have been called out for spreading false or misleading information.

But it's simply worth noting that for PatriotHole, which has suckered social media users into taking its articles literally since its 2014 launch as ClickHole, will likely be making a lot of politically charged Facebook pundits look bad in the near future.

It's a joke, and one probably aimed at you. You're playing yourself. Don't be that person.