Take a lesson from my dad, whose late-life routine serves as a case study for staving off cognitive decline 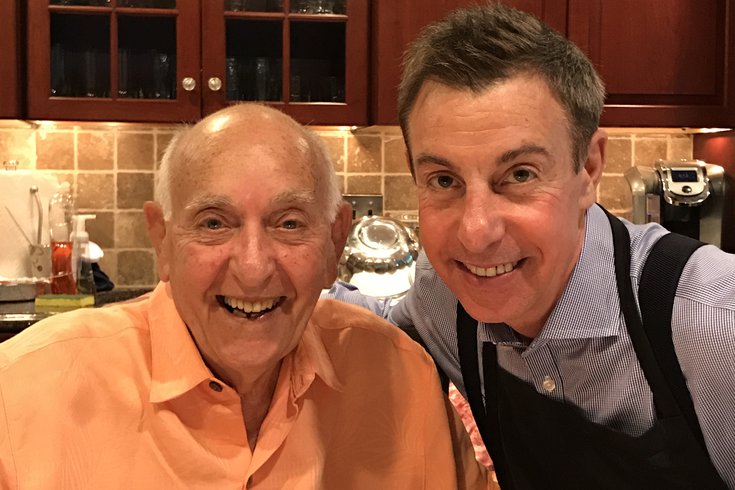 Louis Bezich, right, with his dad, Tony Bezich, who maintained an active social life filled with friendly debates and swing dance events until he died three years ago.

My father lived to age 91. He was very active and mentally sharp until the day he died. For probably his last 20 years, he engaged in a lifestyle that made him very happy. A routine he followed religiously.

These rituals kept his mind sharp and his body functioning, which, among other things, enabled him to engage in one of his most enjoyable acts — arguing. Not the grumbling or complaining you might associate with an older man. No, Dad, a lawyer who continued his own unique form of practice well into his 80s, loved the art of debate. Whether politics, sports or the escapades of Hollywood celebrities, he loved to challenge, probe and prod, all to start a conversation.

Now gone for three years, what could be a little irritating at times was perhaps one of the best things he could have done to ensure his longevity and maintain his quality of life. When combined with the social life he built, it's no wonder he was able to fight off the cognitive decline so many men fear as they age.

Moreover, the enjoyment brought by his routines are textbook case studies from the psychology of well-being, offering men of all ages a lesson on behaviors that can serve them well into their later years.

According to Harvard Medical School, continuing work and satisfaction in life can help older adults preserve their cognitive health. Along with a healthy diet, regular aerobic exercise and proper sleep, experts cite the use of thinking skills regularly as one of the best ways to protect against mental aging.

The National Institute on Aging says people who engage in personally meaningful and productive activities with others tend to live longer, boost their mood and have a sense of purpose. Such activities, NIH suggests, help maintain well-being and may improve cognitive function.

Dad's daily ritual was anchored by morning coffee and conversation with his buddies at a local McDonald's. Much like I'd subsequently notice at coffeeshops and other venues in the area, a group of maybe a half-dozen to 10, mostly men, would gather each morning to discuss the day's headlines, their families or whatever issue Dad would toss on the table. Knowing his audience, he would be sure to pick topics or focus on newspaper stories that would evoke the ire of certain members of the group to insure a robust debate.

In addition to the conversation, there were regular requests for legal advice. Members of his ad hoc club, customers who had come to know him, or the occasional fast food employee would inevitably have a legal question to run by Dad. Never one to carry a cell phone, it became customary for him to get calls on the restaurant's land line with employees paging him to the counter where they would extend the cord so he could take the call.

In total, the experience was social, stimulating and, most importantly, as Dad would say, fun. On the weekends, after visiting McDonald's, he often would stop by our house for another cup of coffee and update my wife and me on the latest escapades of his gang. We knew exactly what time to expect him and were never surprised when he would voice his opinion on a topic in the news to get a reaction and trigger the interchange he sought. For him, whether with us or his McDonald's gang, it was about the pleasure he derived from being engaged.

Dad's other dominant behavior that shaped his later life was swing dancing. He lived for his Friday night dance and his weekly ritual of dinner, often the same exact meal, followed by the ballroom. Much like McDonald's, there was a cast of regulars and always stories on their lives and the events of each week's dance. Dancing combined physical activity with a social dimension that contributed to his happiness. The positive impact of these activities on Dad's cognitive skills was evident, but clearly an afterthought that I can only now fully appreciate.

Another report from the National Institute on Aging says that aging affects cognitive ability and that subtle sex differences in cognition exist across the lifespan. An observational study by psychologist Anna C. McCarrey and colleagues in NIA’s Intramural Research Program showed that cognitive ability in some, but not all, domains declines at a steeper rate for men than for women.

Dr. Jag Desai, writing for Core Medical & Wellness, indicates that a steady decline in cognitive abilities is an unfortunate reality that comes with age. Mild cognitive impairment, the phase between the expected mental decline that comes with age and the more severe illness of dementia, affects about one in five people over the age of 65. Men are particularly at risk and are more likely to develop Alzheimer's disease than women, so Desai believes that it is especially important to take early steps to combat cognitive decline before it begins to significantly impact your life.

Brain health is yet another dimension of your overall health that can be positively impacted by your lifestyle. According to Dr. Donn Dexter of the Mayo Clinic, changes to your body and brain are normal as you age. However, Dexter says there are some things you can do to help slow any decline in memory and lower your risk of developing Alzheimer's disease or other dementias. He recommends five things in order of importance: exercise regularly, get plenty of sleep, eat a Mediterranean diet, stay mentally active and remain socially involved.

My dad knew nothing about brain health. He was just a guy who had a lust for life and craved social engagement. I guess it was just pure luck that these qualities and the happiness that they produced contributed to his longevity.

We should all be so lucky, but if you want to hedge your bet and take the advice of experts, try living healthy and integrating an active social life that adds purpose and meaning on a daily basis. It's a winning combination that will keep your mind sharp and your body fit for years to come.