Renting a spare room on AirBnB? You could be taxed soon. 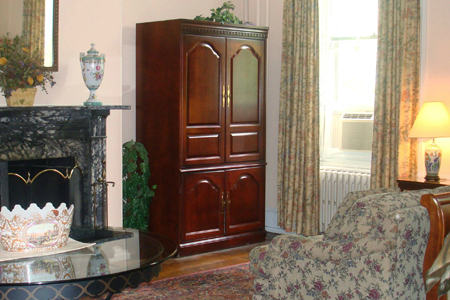 A room at the Clinton Street Bed and Breakfast whose owner said that the new tax seemed fair.

Renting a bedroom on Airbnb? The city of Philadelphia now wants its cut.

Councilman William Greenlee has introduced legislation that will legalize renting out space in private homes and impose an 8.5 percent tax, the same rate paid by hotels.

Many of those types of rentals are done through Airbnb, a website that allows users to temporarily rent out their property for a fee. The service is mostly illegal in Philadelphia because it skirts rules governing hotels, city officials say.

Greenlee said other cities have imposed similar taxes and Airbnb has had no problem imposing them. He said the benefit of his legislation is that it would provide the practice with legitimacy.

“Right now, the city could technically go after anyone” who does lodging, the councilman said, but hasn't so far.

Greenlee said he introduced the legislation on behalf of Mayor Michael Nutter's administration. If passed, it would apply to any person who rented their property out for less than 31 days a year, according to the legislation.

The legislation does not just apply to Airbnb but to all temporary rentals.

Airbnb did not immediately return a request for comment.

Cathy Ravun, the owner of 1024 Clinton Street Bed and Breakfast, said she thought the proposed tax was fair.

Greenlee said the tax was an extension of one already in place.

“It is not a new tax,” Greenlee said.

If passed, the tax would go into effect in July, in time for those folks renting out their homes to people visiting Philadelphia for Pope Francis' visit in late September.