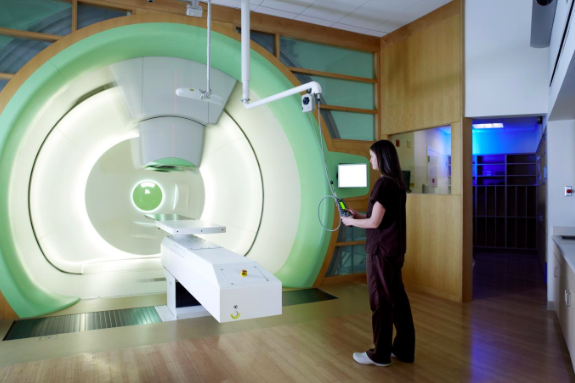 Penn researchers have demonstrated that proton therapy reduces the likelihood of adverse affects among cancer patients also being treated with chemotherapy. The study compared proton therapy patients to those receiving traditional photon radiation.

Cancer patients who receive proton therapy in conjunction with chemotherapy are less likely to experience side effects requiring hospitalization than those who undergo traditional photon radiation, according to new research out of Penn's Perelman School of Medicine.

In the largest review of its kind, Penn researchers analyzed data from 1,483 patients who received treatment for brain cancer, head and neck cancer, lung cancer, gastrointestinal cancer, and gynecologic cancer. None of the patients had metastatic cancer and all were undergoing curative treatment.

Traditional photon radiation uses multiple x-ray beams to target cancerous tumors, but often deposits radiation in tissue beyond the location of the tumor. This can damage tissue when the beam exits the body.

The purpose of the study was to examine the 90-day window following treatment to see whether one group or the other had a higher rate of hospitalization from adverse effects.

Researchers found that only 11.5% of the proton group (45 patients) were hospitalized during that 90-day period, compared to 27.6% of patients (301) in the traditional group. The study included a weighted analysis of both groups to determine whether other causes may have contributed to adverse effects.

The analysis demonstrated a two-thirds lower risk of severe toxicity in the proton group, while overall survival and disease-free survival were similar between the two groups.

"This is exciting because it shows that proton therapy offers a way for us to reduce the serious side effects of chemo-radiation and improve patient health and wellbeing without sacrificing the effectiveness of the therapy," said Brian Baumann, a radiation oncologist at Penn and lead author of the study published in JAMA Oncology.

The results suggest that clinical trials of proton therapy may be a particularly strong option for older and sicker individuals who have other conditions complicating their cancer treatments.

While further research is needed, the analysis provides information that has been difficult to gather through randomized clinical trials to date.