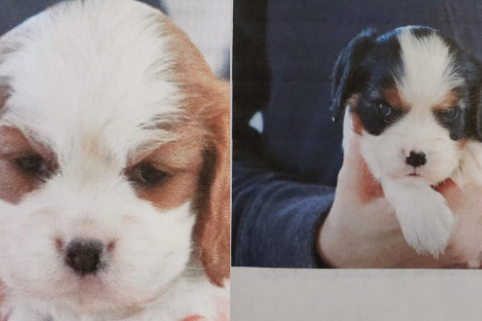 Adelaide and Ansel, two Cavalier King Charles Spaniel puppies, were stolen from the Willow Springs Kennel in Quakertown, Pennsylvania on Feb. 7, 2020. Richland Township police are seeking help from the public to locate the missing puppies.

A pair of Cavalier King Charles Spaniels are missing from a Bucks County kennel whose owners say the puppies were stolen last Friday, according to authorities.

Richland Township police are investigating a theft that occurred at the Willow Spring Kennel, located at 479 East Cherry Road in Quakertown. Each of the dogs are valued at more than $3,000.

Authorities said the theft occurred during the overnight hours on Friday. The puppies, a male named Ansel and a female dubbed Adelaide, were removed from a nursing bin.

Both puppies were just seven weeks old and in need of their first set of veterinary treatments.

Breeder Candy Smith told 6ABC the puppies are at risk of pneumonia and could potentially die if not given proper care.

Authorities are asking anyone with information about this theft to contact Richland Township police at (215) 536-9500.