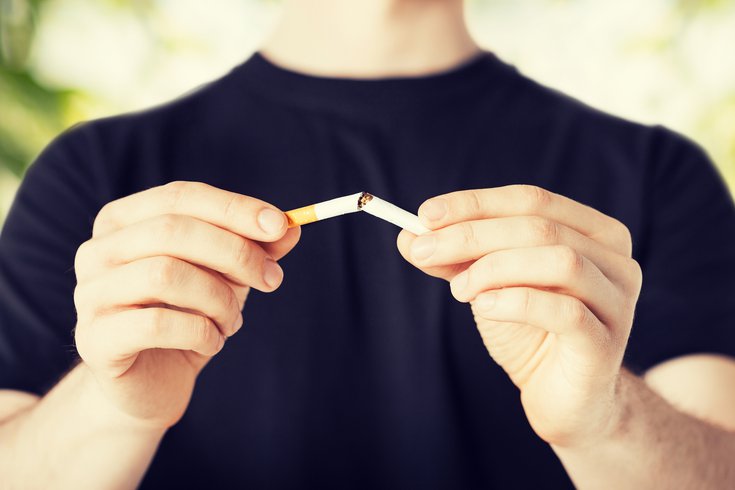 Smokers are three times more likely to die of lung cancer or a tobacco-related cancer than nonsmokers, according to a study of more than 400,000 Americans.

In a study involving more than 400,000 Americans, the rate of cancer death among smokers – especially from lung cancer – was three times higher than nonsmokers. But smokers who quit by age 45 reduced their excess risk by 89%. And those who managed to kick the habit by age 35 completely eliminated it.

The researchers from the American Cancer Society said their findings emphasize the importance of quitting as early as possible. Still, principal scientist Blake Thomson stressed that it is never too late to quit.

"The take-home message is that it is never too early and never too late to quit," Dr. David Tom Cooke, a volunteer spokesperson for the American Lung Association, told U.S. News & World Report. "Sometimes an individual has to quit multiple times to stay off tobacco products permanently."

People who are struggling to kick their smoking habits are advised to talk to a health care provider about prescription medications and over-the-counter nicotine replacement gums and patches that can help manage nicotine cravings.

Here are six tips from Quit.com, the Mayo Clinic and the Centers for Disease Control and Prevention for quitting smoking:

1. Avoid triggers — situations or places where you smoke most often. For example, if you know that you will find it hard not to light up when drinking alcohol, then have a plan in place to avoid the urge.

2. Distract yourself when a craving hits. Tell yourself that you have to wait 10 more minutes and then go do something else that will take your mind off of having a cigarette.

3. Chew on something crunchy like carrots, celery or nuts when you want to light up.

4. Increase your physical activity. Even going out for a short walk or jog can reduce the intensity of a craving.

5. Stress can be a powerful trigger for many smokers. Practice relaxation techniques such as deep-breathing exercises, yoga and massages to keep your daily stress more manageable.

6. Don't be afraid to ask for help. Quitting smoking can be a daunting task, but it is not a fight you have to take on all by yourself. Join a support group or ask a family member or friend to help when the cravings become hard to ignore. The free telephone quit line — (800) 784-8669 — also can provide support and counseling.

The study's data was collected from a federal health survey administered between 1997 and 2014. The study was published in the journal JAMA Oncology.