Norristown native Mike Piazza headed to the Hall of Fame

By Ryan Lawrence
PhillyVoice Contributor
Hall of Fame MLB
from 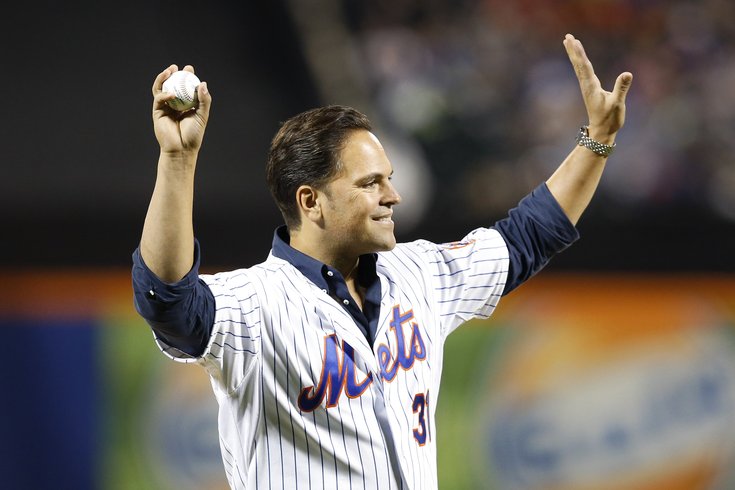 Mike Piazza acknowledges the crowd before throwing out a first pitch at Citi Field in September.

Mike Piazza, a Philadelphia-area native who was only drafted by the Los Angeles Dodgers as a favor to Tommy Lasorda, is headed to Cooperstown.

Considered by many as the greatest hitting catcher in baseball history, the 47-year-old Piazza was elected to the National Baseball Hall of Fame on Wednesday. Piazza gained entrance to the hallowed halls of Cooperstown by garnering 83 percent of the ballots cast by the Baseball Writers Association of America.

“Tremendous honor -- overwhelming,” Piazza, on the ballot for the fourth time since his retirement, said on a conference call on Wednesday night.

Piazza, a Norristown native and product of Phoenixville High School, will be inducted this summer with Ken Griffey Jr., who was also born in Pennsylvania (Donora). But sharing a birth state is about all Piazza had in common with Griffey, as far as their entrance into the game that eventually made both Hall of Famers.

When asked on Wednesday what endeared him to sometimes hard-to-please fans in New York, where he excelled in the second half of his career, playing in his first World Series in 2000, Piazza credited those fans he grew up alongside at The Vet.

Griffey, 46, is the first former No. 1 overall pick to get elected into the Hall of Fame. The son of three-time All-Star outfielder of the same name, Griffey was a superstar from the time he entered the league as an ever-smiling, backward hat-wearing teenager.

Elected on his first time on the ballot, with 99.3 percent of the votes cast by the BBWAA, Griffey the record for the highest voting percentage ever.

But it’s also about what people may have predicted when he broke into the big leagues as a 19-year-old phenom in 1989.

While Griffey is the first No.1 overall pick to gain induction, Piazza is the lowest drafted player to ever enter the Hall; he was selected by the Dodgers with the 1,390th pick (62nd round) of the 1988 draft.

That round no longer exists. The 2014 draft ended after the completion of the 40th round.

“I think it all adds up and really crystalizes how special this game is,” Piazza said. “It’s unique and unlike any other sport -- you can have two guys go into the Hall, like Ken Griffey and myself, from two completely opposite ends of the spectrum. There are so many opportunities in this game, and you can find a role be an underdog.

“If you can do one thing exceptionally well and refine that, and improve your weaknesses, you can definitely make a living in this game. That’s a lesson into how special this game can be. You just never know.”

Piazza hit .308 with 422 home runs and a .922 OPS in 16 major league seasons with the Dodgers, Florida Marlins, New York Mets, San Diego Padres, and Oakland Athletics. He hit more than 30 home runs in a season nine times in his career (which is more than double the total of any other catcher), won the National League Rookie of the Year in 1993, was selected to 12 All-Star games, won 10 Silver Slugger Awards and was named the MVP of the 1996 All-Star Game at Veterans Stadium.

When asked on Wednesday what endeared him to sometimes hard-to-please fans in New York, where he excelled in the second half of his career, playing in his first World Series in 2000, Piazza credited those fans he grew up alongside at The Vet.

“Coming from the East Coast and growing up in Philadelphia and watching fans there, I kind of knew what the expectations were,” said Piazza, who arrived at Shea Stadium as a 29-year-old, 6-time All-Star in 1998. “I was able to block everything out, put my nose down and work. I think that’s something they really took to, and saw I wasn’t here to sort of be a rockstar, (but) to just go out and do my job. That for me was something they really embraced.”

Fans anywhere will also be attracted to production.

Piazza hit 137 home runs in his first four seasons in New York, which coincided with the Mets first trip to the World Series since 1986 in 2000, when they faced off against the Yankees (and lost). Piazza would make just as many All-Star games in a Mets uniform as he did as a Dodger (six each) and is likely to become the second Hall of Famer (with Tom Seaver) to wear a Mets logo on his plaque in Cooperstown.

But Piazza never cried foul because he was able to put his situation into historical context.

“Joe DiMaggio had three ballots (before he got in) so, myself being a student of the history of the game and having respect for the process, it was nail-biting at times, but I had a tremendous amount of support throughout my career from the writers and the fans,” said Piazza, who also referenced Yogi Berra, a three-time MVP who didn’t get in on his first year on the ballot).

An aside — it’s probably not worth the headache of trying to figure out why BBWAA members vote the way they do. DiMaggio's name wasn't even on half of the ballots (44.3) cast in 1953, his first year eligible after retirement. No baseball player - not Babe Ruth (95.1 percent), Willie Mays (94.7), or Hank Aaron (97.8) - has ever been voted in unanimously. Three current BBWAA members sent in ballots last month and did not check off Griffey’s name.

But at least Griffey got in on his first try, unlike Berra, DiMaggio, Piazza, and many, many others.

“I don’t want to say it was difficult,” Piazza said. “Knowing how many great players had to wait, it keeps it in perspective. I was able to draw from that to stay patient, stay optimistic.”

As with many a star player of the 1990s, Piazza also had the suspicions of PED use follow him into the Hall of Fame voting process, even if such suspicions were unsubstantiated, unlike of Barry Bonds, Roger Clemens, Mark McGwire and others.

“So many of those things are out of my control, things I can’t worry about,” Piazza said. “It’s an interesting world today, there are so many outlets out there… You go out there as a player, you throw the numbers up and you work as hard as you possibly can and it’s like an artist -- you put it out there and people can be critical and people can be complimentary. I’ve been blessed that many people have been complimentary.

“I truly found it healthy in life to be positive, try to set a good example, try to be appreciative of your blessings and keep it at that. Let everyone -- that’s the freedom we have, you can say these things and that’s just the country we live in. At the end of the day, you can only do so much as a player and that’s what I focus on.”

Although his pre-major league career made him an unlikely future star and his post-career meant having to wait his turn into Cooperstown, Piazza has lived a mostly charmed life.

He was drafted because Dodgers legend and former manager Tommy Lasorda happened to be the godfather of his brother, Tommy. He befriended and got hitting tutelage from none other than Hall of Famer Ted Williams after meeting him at a baseball card show as a teenager.

And now Piazza is joining Williams and the rest of the game’s all-time greats in the Hall of Fame.

“I’m a huge student of the game as far as the history,” Piazza said. “So this is something that for me that words can’t describe.”