Report finds police aren't interviewed until months after a shooting 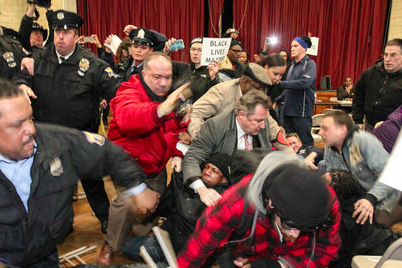 10 people were arrested in a protest disrupting a community police meeting in Lawncrest on Thursday night.

The Philadelphia Police Department’s use of force against suspects has "serious deficiencies" and is in need of broad reform, including better public disclosure and improved practices for investigating incidents, according to the results of a Department of Justice investigation into the city’s practices released Monday.

"The first part of trust is to acknowledge what is working and what is not working," said Ronald Davis, office director of the Community Oriented Policing Services, which issued the Department of Justice report.

"We know the truth hurts."

In 2012, police shot 59 people and killed 16. Since then, however, the numbers have dropped. Last year, police shot at suspects 29 times. Four were killed. The report said between 2007 and 2013, the police department averaged one officer-involved shooting a week. Last year, however, that number dipped to one incident about every 12 days.

The report found that while the department had cooperated fully with federal officials, police had lost trust with parts of the community because of how deadly force incidents are handled. It's a problem that requires policy reviews, better public disclosure and more accountability around investigations, the Justice Department said.

“Distrust in the ability of the [police] to investigate itself pervades segments of the community,” the report said. “Past and present scandals, high-profile [officer-involved shooting] incidents, and a lack of transparency in investigative outcomes help cement this distrust.”

The report detailed 91 recommendation,  including changes in training, investigations of police-involved shootings and public disclosure. Over the upcoming 18 months, a federal officials will work with the police to monitor the implementation of the reforms.

"Having an independent third party take a look at what you are doing gives it a level of credibility that simply does not happen when everything is done internally," the commissioner said.

The department has already started posting more information on police-involved shootings on its website.

Mayor Michael Nutter said Philadelphia was focused on improving how it uses force and that any violence within the city is unfortunate.

"I want to express regrets for all who have been shot or killed in Philadelphia," said Nutter. "We are a city that believes that all life is precious."

With less than a year left in his administration, his office "will hand off a roadmap and a blueprint" to his successor, Nutter said.

The Justice Department report also calls for a member of the Police Advisory Commission to have access to investigative information with the power to conduct their own interviews if necessary, but stops short of calling for an independent prosecutor to investigate certain deadly force incidents, which some activists have sought. The document does say that an outside agency should be able to review investigations when the suspect was unarmed.

The stepped-up role of the Police Advisory Commission is a "sea change," according to its executive director, Kelvyn Anderson. Now, he hopes he will have the funding to enact the recommendations within the report.

"Some of this is resources for us quite frankly," he said. "We will need the ability to put our investigators on the ground when shootings occur."

More information from closed investigations should be released and the department’s use of force policies should be posted publicly, the report said.

Justice investigators also found that the department's Use of Force Review Board and Police Board of Inquiry were duplicative in their role of looking into police-involved shooting and should be merged.

“The [two boards] … at times have conflicting outcomes,” said the report. “This sends a mixed message to members of the department and causes unnecessary internal strife.”

When police-involved shootings are investigated, they lack consistency, according to the report, and a manual needs to be developed for how they should be conducted.

The report calls for interviews with officers and witnesses to be recorded on video. In addition, currently, “The [internal affairs shooting team] waits for the district attorney’s office to decline charges against an officer before it interviews discharging officers and closes its investigation,” the report said.“As a result, most officers involved in shootings are not interviewed until three or more months after the incident occurred.”

Instead, interviews should be conducted no later than 72 hours after the incident.

Officers also need to be provided with training that provides more clarity and preparation for how and when to use deadly force.

In Philadelphia, activists have focused on the case of Brandon Tate-Brown who was killed by police in December 2014 after a struggle, according to officers. Tate-Brown’s mother wants more evidence released in the case and has advocated publicly for his killing to be reviewed. Last week, District Attorney Seth Williams said he would not charge the officers who shot Tate-Brown saying evidence backs up their story. At a police gathering with community members soon after the announcement, 10 people were arrested after a melee broke out.

Ramsey also co-chaired the President’s Task Force on 21st Century Policing, which was set up last year to study how to improve the relationship between police and the communities they serve.

The report was conducted by reviewing hundreds of departmental policies, interviewing more than 160 community members, police officers and department civilians and reviewing procedures, including the use of force review board hearings of 20 officer-involved shooting incidents.

The report was initially scheduled to be released earlier this month but the killing of police Officer Robert Wilson III in the line of duty during a North Philadelphia robbery caused a delay.