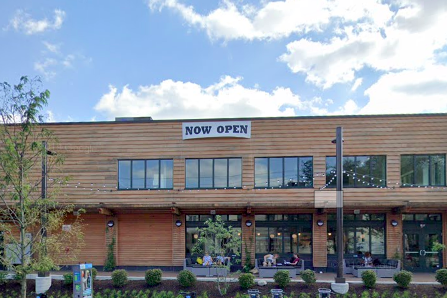 Renata's Kitchen's new location is now open in the 40th street trolley station. The Middle Eastern restaurant is serving up the same menu as its spot near 45th Street and Baltimore Avenue, but in a space much larger. Wednesday marked the first day of service.

The restaurant is serving up the same menu as its spot near 45th Street and Baltimore Avenue, but in a space much larger. Wednesday marked the first day of service, and the restaurant occupies the location briefly held by the Trolly Car Station diner.


Known for its all-day brunch service, Renata's owners will be able to accommodate more diners in the trolley station, which was renovated in 2018, than it can at its current space.

Big news! We'll be opening the 40th Street Station location on WEDNESDAY (2/5/20) for regular service. Hope to see you all in the new spot!💗

The couple that owns Renata's Kitchen, Yasser and Kate Aiq, opened the restaurant in 2012 and have been serving meals from the smaller location since 2015. But the long lines on the weekends motivated the Aiqs to expand. Their new location will be six times larger than their existing restaurant.

$5 off your first order of $20 or more with our new Renata's app! Download today for great #deals on pickup and delivery. #yum #brunch #westphilly https://itunes.apple.com/us/app/renatas-kitchen/id1457121129?mt=8

On the Middle Eastern side of its menu, Renata's Kitchen serves up specialities such as shakshuka merguez, burekka, and Arabian salad. They will serve up brunch favorites like eggs benedict, pancakes, and omelets. Renata's Kitchen's new location will be open from 8 a.m. to 4 p.m.

Yasswer and Kate plan to keep the location at 45th and Baltimore open, they told the Inquirer, but for lighter fare. The couple is waiting on a liquor license for the new restaurant, where they plan to expand the menu to include dinner, a Meditteranean wine list and a cocktail menu.

Trolley Portal Gardens opened in 2018 through a renovation project that cost around $4.5 million.