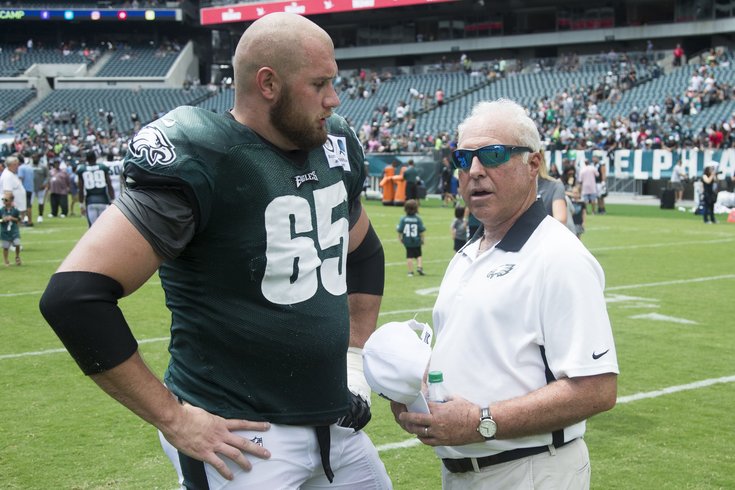 According to a report from Darren DeGaetano, contributor at 94.1 WIP, Lane Johnson is facing a lengthy suspension after violating the league's policy on performance enhancing drugs.

I have been told Lane Johnson will be suspended 10 games for PED violation. His 2nd offense. #Eagles

The news was later confirmed by several other reporters, locally and nationally.

If accurate, the loss of Johnson would be devastating, both in the short term and long term.

In the short term, the Eagles' RT spot would become a gaping hole along their offensive line. The Eagles could fill in a bench player directly into his spot, like Matt Tobin or Dennis Kelly, both of whom would be major downgrades. Alternatively, the Eagles could move Allen Barbre out to RT from his LG spot, and insert free agent acquisition Stefen Wisniewski or rookie Isaac Seumalo in at LG.

In the long term, offensive tackle is already likely to be among the Eagles biggest needs next offseason, as LT Jason Peters' career is winding down. The Eagles were counting on Johnson to be the LT of the future, and he has a chance to be a good one. Having Johnson playing well at RT in 2016 heading would have helped alleviate concerns about protecting Carson Wentz's blind side for the foreseeable future. However, the Eagles will now have to question whether they can trust Johnson not to fail a third test, which would result in a ban of at least two years.

Johnson signed a five year, $56.25 million contract extension with the Eagles in January, with $35 million in total guarantees. According to Field Yates of ESPN, the guaranteed portion of Johnson's contract would void in this circumstance:

Worth noting re: Lane Johnson, per his contract, a suspension would void the guaranteed money in the 5-year extension he signed in January.

That does not mean that Johnson would not make that money. It merely means that it would no longer be guaranteed.

Johnson's first failed test was prior to the 2014 season, when Johnson missed four games. Johnson's absence was felt harshly, particularly in the Week 4 game against the San Francisco 49ers that season, when the Eagles were grossly undermanned along their offensive line due to other injuries.

According to Ian Rapoport of NFL.com, Johnson plans to appeal.

That report seems to be in contrast to that of Jeff McLane of the Inquirer and Les Bowen of the Philadelphia Daily News, who received return texts from Johnson, who denied the report.

Jay Glazer of FOX Sports reported that he has spoken with Johnson, who gave the following explanation:

Just heard from Lane Johnson, says he took an amino acid that was approved but tested positive for peptide. Fighting it as well as company. You're responsible for what goes in your body but he insists it was approved. Waiting on B sample.

Neither Ken Sarnoff, the agent for Johnson, nor the Eagles responded to a request to confirm or deny.