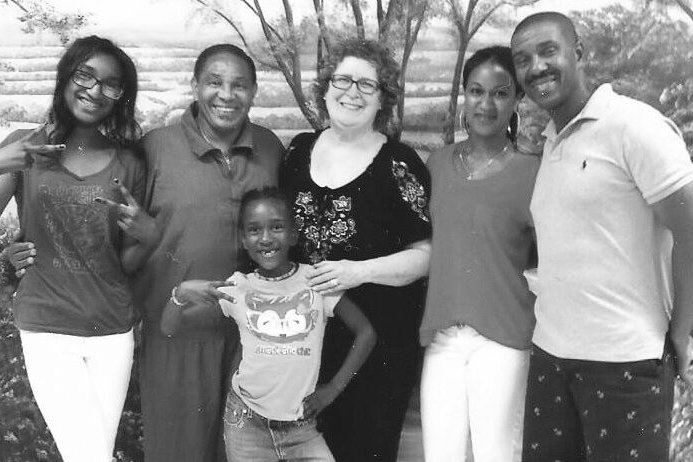 Freddie Nole, at center, with his wife, Susan and their family. Nole is serving a sentence of life without parole for a homicide he committed at the age of 17.

A new report calls for Philadelphia District Attorney Seth Williams to utilize a "new approach" in reviewing the cases of juveniles who have been sentenced to life without parole in Philadelphia.

In a January ruling, the U.S. Supreme Court said its decision in a 2012 case – that life without parole sentences for juveniles are unconstitutional – should be retroactive. That is expected to impact 524 Pennsylvania inmates who committed crimes while under the age of 18.

Philadelphia alone is responsible for about 300 individuals who are currently serving sentences of life without parole for crimes they committed as juveniles, according to the report published Thursday by the Fair Punishment Project and the Phillip Block Project. That makes Philadelphia home to nearly nine percent of all juveniles nationwide who have been sentenced to life without parole. The city leads the nation in such sentences, the report says.

"Seth Williams has an obligation to keep the people of Philadelphia safe and make sure he is seeking justice," said Rob Smith of the Fair Punishment Project. "Is this actually keeping people safe and is it justice?... I think the answer to both those questions is no."

Following the Supreme Court's decision, the District Attorney's office said that it would conduct resentencing hearings for inmates sentenced as juveniles in Philadelphia to serve life without parole.

But according to Cameron Kline, spokesperson for the District Attorney's office, the dates of such hearing has not been determined.

"This is a very complicated thing," Kline said Friday, adding the district attorney's office isn't ready to make an official response to the Supreme Court ruling. "There's a lot of moving parts."

Smith said that Williams should re-evaluate whether resentencing hearings for 300 inmates is worthwhile and cost-effective. The report notes that many of these individuals are elderly and have served most of their adult lives behind bars, and suggests giving them an opportunity for a parole hearing.

The case of John "Freddie" Nole, a 64-year-old inmate at Graterford State Prison, was highlighted in the report. He was sentenced to life without chance of parole after beating an elderly merchant to death in a South Philadelphia robbery back in 1969, when he was 17,

Nole has turned his life around and now serves as a board member for a group that helps former prison inmate to return to the community, the report said.

The report notes that Holbrook didn't participate in the murder.

Smith said that holding hearings to resentence the Philadelphia prisoners would be expensive with new hearings, court costs and lawyer fees.

Even then, he said, the Supreme Court's ruling isn't specific when it comes to "irreparable corruption," a determination made by some states to determine if an individual can be rehabilitated in prison.

Pennsylvania doesn't use "irreparable corruption" as a qualifier for life sentences, instead making life without parole automatic in cases of first- and second-degree homicide convictions.

The Supreme Court said that such sentences cannot be automatic. But just how the resentencing process will shake out remains to be seen, Smith said. If cases are not handled correctly, everything could go back to square one, even after resentencing hearings are held, he said.

The report adds that former Philadelphia District Attorney Lynne Abraham believed in the concept of the "super predator," which as detailed in a 1995 piece in the Weekly Standard, held that about six percent of juvenile males would commit five or more serious crimes by the age of 18 and would account for about 50 percent of all serious crimes committed by those in their age group.

In Philadelphia, the "super predator" theory – since debunked – led to harsh sentences for young offenders under Abraham, the report said. (Abraham was district attorney from 1991-2010.)

Williams needs to avoid the mistakes made by Abraham, said Smith.

"The biggest question for Seth Williams is a moral one: does he double down on the Lynne Abraham era or does he join the growing chorus of legislators and prosecutors who now recognize that it is immoral and excessive to sentence a juvenile to die in prison without any hope for release," Smith said.

Instead, Williams could save taxpayer money by deciding not to contest parole for these inmates, allowing them to have participate in the parole process. Right now, they do not have that right.

"It doesn't mean that anybody out of these 300 will just walk out of prison," said Smith. "There's a parole system in place... You're saying 'people can change'."

The report was authored by The Fair Punishment Project of Cambridge, Mass., a joint initiative of Harvard Law School's Charles Hamilton Houston Institute and the Criminal Justice Institute, along with the Phillips Black Project, a non-profit law practice that, according to its web site, is "dedicated to providing the highest quality of legal representation to prisoners in the United States sentenced to the severest penalties under law."