Second person-of-interest picked up by police in Northeast Philadelphia

Cosmo DiNardo, the 20-year-old Bensalem man previously identified as a person of interest in the missing persons case in Bucks County, confessed through his attorney on Thursday to "committing or participating" in the murder of all four missing men, according to multiple reports.

The confession, which comes a day after DiNardo's arrest on a charge connected to the investigation, will spare him the death penalty, 6ABC reports.

RELATED: Woman highlights dangers of social media with messages sent to her by Cosmo DiNardo

Late Thursday, Philadelphia police picked up another man, called a second person-of-interest in the case, at a home in the 800 block of Magee Avenue in Northeast Philadelphia, according to Fox29 News. The station reported that Bucks authorities were en route to Northeast Detectives to collect the man for questioning in the case.

Citing an anonymous source, the Associated Press reported that DiNardo killed the men separately after selling them marijuana and then burned their bodies at his family's farm in Solebury Township, where a massive police search has been underway since Sunday. A co-conspirator was involved in three of the murders, the AP reported.

Paul Lang, DiNardo's attorney, told a group of reporters that his client feels "deep remorse" for his role in the murders, which was not immediately clear based on the language of the confession.

On Thursday night, Bucks County District Attorney Matthew Weintraub said he would have no comment on Lang's remarks to the press about his client.

The District Attorney has no response at this time to statements of defense counsel regarding person of interest Cosmo Dinardo.

During a midnight press conference early Thursday morning, Weintraub had announced that remains from Dean Finocchiaro, 19, of Middletown, one of the four missing Bucks County men, had been found by investigators in a deep "common grave." DiNardo remains held on $5 million cash bail pending formal charges from Bucks County prosecutors.

Weintraub was set to hold another press conference Thursday night, but prosecutors canceled it, suggesting they needed more time to confirm new information.

The attorney's office said in a tweet that Weintraub would hold a news briefing 11 a.m. Friday not far from the DiNardo property.

RELATED: Cosmo DiNardo: What we know about 'person of interest' in Bucks County case

On Wednesday, DiNardo, 20, was arrested for the second time in three days after he allegedly tried to sell a car belonging to 21-year-old Tom Meo of Bensalem, one of the missing men.

During the early morning news conference, Weintraub was careful not to directly link DiNardo to the human remains, but said he hoped DiNardo stays behind bars. He said authorities did not yet have enough evidence charge anyone with Finocchario's death, but that officials were "going to start looking seriously at the homicide charges and, in fact, we already have pursued that option."

"I thought we bought ourselves a little time in charging Mr. DiNardo with the stolen car case (on Wednesday) and getting that $5 million bail," Weintraub said. "It is my hope he does not post that, but that is his prerogative, of course, if he can post it."

Authorities have found evidence in two different locations, but have not provided details publicly.

DiNardo was first was arrested Monday on an unrelated gun charge. His father posted $100,000 to bail him out Tuesday. Weintraub said at the time he wanted a higher bond for DiNardo's second arrest because he believes the 20-year-old poses a flight risk. 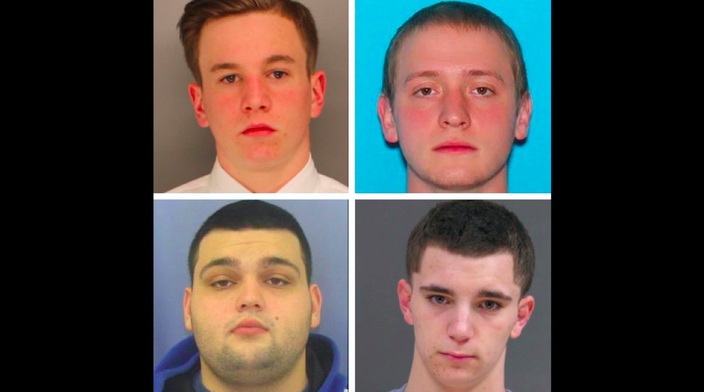 According to a police affidavit, police found Meo's car Sunday on a DiNardo family property in Solebury Township. They said the keys and a title were hanging up in a garage. A witness said DiNardo offered to sell him the car on Saturday.

On the last night Meo and Sturgis were seen, a police license plate scanner picked up DiNardo's truck and Meo's car driving just seconds apart. The location was within a couple of miles from where Meo's car was found and where Sturgis' vehicle was discovered, a short distance away.

An attorney for DiNardo's parents, Antonio and Sandra DiNardo, issued a statement Wednesday saying the couple sympathize with the families of the missing men and are cooperating "in every way possible with the investigation."

The DiNardo farm alone covers 90 acres, much of it cornfields. They also own other nearby farm parcels, along with concrete and construction businesses based in Bensalem, about 20 miles away, where the son was arrested at the family home.

The FBI used heavy equipment to dig a deep ditch on the farm property, then sifting through each bucket of dirt by hand.

At least some of the missing men are friends, but it's unclear how well they knew DiNardo, if at all. Online records suggest he attended the same Catholic high school as Patrick but was a year ahead.

In the February gun charge he still faces, DiNardo is accused of illegally being in possession of a shotgun and ammunition because of a previous involuntary commitment to a mental health institution. An affidavit in that case said he is "known to be suffering from mental illness."

His social media posts suggest an avid interest in hunting, fishing and Air Jordan sneakers, which he appeared to sell online. He had enrolled at Arcadia University in Glenside at one point as a commuter student, with hopes of studying abroad in Italy, according to an article on the college website. He had a few other brushes with the law since turning 18 over traffic violations and other minor infractions.