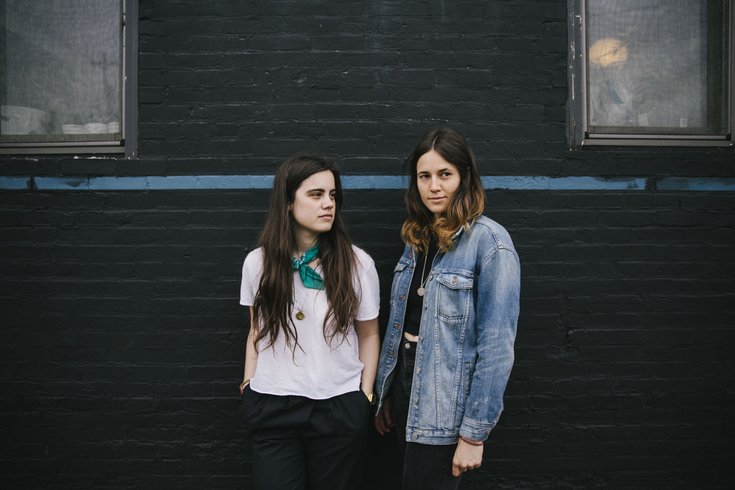 The Dove and the Wolf

Paloma Gil and Lou Hayat have been playing music together since they met as teenagers in France more than a decade ago.

“Our favorite band was Muse,” Gil told me over coffee in Fishtown earlier this month. “The first song we ever played together was a System of a Down song,” she added with a chuckle.

Gil and Hayat began writing their own songs separately around the same time. Years later, in 2012, the duo released their first EP as The Dove and the Wolf, a jumbled, approximated translation of their first names (“Paloma” means dove in Spanish, and Lou sounds close enough to “loup,” the French word for wolf).

That self-titled 2012 EP was folksy: At the center of most of the songs were fingerpicked acoustic guitars, two-part harmonies and quaint, reflective lyrics.

“We were playing acoustic a lot, we had just written those songs, and we went to the countryside to record it with our friend Pierre,” Gil said. “[We] thought it would be two guitars and two vocals pretty much,” but the result was beefier than the studio-upgraded demos they’d anticipated and seemed to provide a spark to do it again.

Two years later, in 2014, Gil and Hayat doubled down on music as a full-time endeavor and moved to the States. They toured the U.S. for the first time as openers for singer-songwriter Rachael Yamagata and shared a second EP, “ The Words You Said,” an in-flux release that has propelled their recent progress.

“After the tour, we didn’t want to go back to Paris right away, so we went to Woodstock for a bit, just to be with Rachael,” Gil said. “After that, we went to New York City because we had friends and it made sense. We spent a month in New York and were like, ‘We can’t live here. There’s no way.’ I had done it before; it was just too expensive.”

Philly became a logical settling point. They house-sat for their current producer, wrote more songs and went on tour again, this time with guitarist and producer Butch Walker.

The Dove and the Wolf’s third and latest EP, “I Don’t Know What To Feel,” is the result of a 2015 return to Paris to renew their visas.

“We were supposed to be there for just a month,” Hayat said.

They ended up staying for almost half a year.

“It was a weird time,” Gil offered. “We didn’t have time to waste in the States; once we had a visa, we needed to leave. We were living every day thinking we might leave three days later. … You can’t do that forever.”

"Once we had a visa, we needed to leave. We were living every day thinking we might leave three days later. … You can’t do that forever.” — Paloma Gil

“I Don’t Know What To Feel” is, at least in part, built from the duo’s meditative aftershock following the terrorist attacks that gripped Paris on Nov. 13, three months into their stay.

“With what happened in Paris in November, it kind of changed everything,” Hayat said. “It’s gonna [sound] stupid and cheesy, but it made you realize you have no time to waste. It was really intense and weird.”

“Seven Days” is the EP’s most direct vehicle for the hangover.

“It’s been seven days; have you noticed any change?” Hayat and Gil sing in unison to a suddenly relevant stranger. “Feels like I’m looking at my city for the first time,” they realize later before another chanted lyric gives birth to the EP’s title. They sound numb and melancholy.

With “I Don’t Know What To Feel,” The Dove and the Wolf have surrounded themselves in better and more polished production than ever before.

Producers Dave Hartley and Nick Krill fleshed the songs out alongside a cast of players providing synth, bass and drums. Hayat and Gil’s guitars have been electric since 2014, and they’ve traded in the homey acoustics for a more floating, amplified sound. On the new EP’s lead single, the Stereogum-premiered “The Smell Of Us,” the guitar parts jangle and twinkle around. As the most upbeat and danceable of the EP’s five songs, “The Smell Of Us” is a smart first single. Even when their other songs carry a similar pace, the music tends toward moodier, heady territory. Hayat and Gil have mastered their interlocked harmonies and the effect can flit between unsettling and endearing. You rarely get one voice without the other.

After writing the songs in France in January, the duo recorded the EP in March in Philly.

“We just needed to put [these songs] out because they’re about something very specific,” Hayat said. “We didn’t want to wait.”

Besides that unanticipated open-ended trip home, their current stint in Philly has been their longest stay in one place since 2014. They now seem pleasantly antsy to move around — to tour and to record — while keeping Fishtown as a base.

There’s also the issue of a full-length album they recorded last August in Los Angeles.

“At the end of that tour, Butch Walker said, ‘I want to make the record,” Hayat said. “We were staying in Malibu. We’d wake up, Butch would pick us up in his blue truck.” And then they’d work.

Hayat and Gil are anxious to frame the album as their official debut and are currently working toward a label release while they roll out the EP. Before it was recorded in Los Angeles, the album was conceived in Philly during that house-sitting session in Fishtown.

“It was this crazy snow, middle of the winter,” Gil said. “And we didn’t leave, and it was just like, ‘Let’s just write songs.’ There was no Internet at the house. We didn’t see anyone else; we just wrote.”

They’ve made a habit out of these kinds of solitary writing sessions followed by clever producer match-making.

And Gil said there’s one constant.

“The core of the song is always our two voices together.”

The Dove and the Wolf