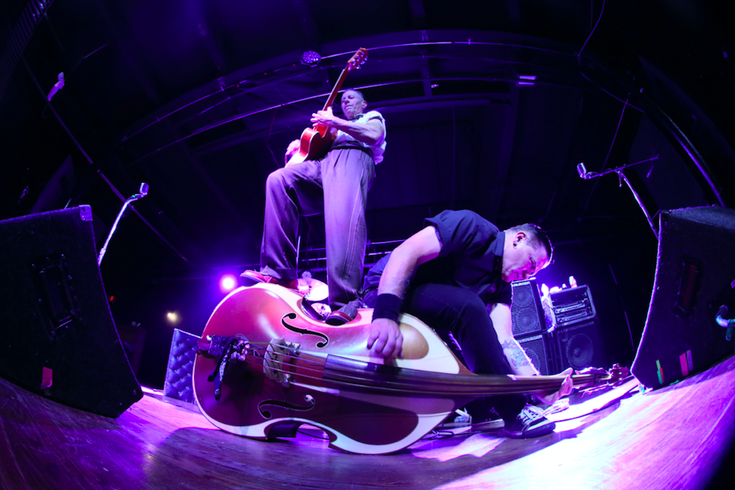 It may be surprising that Psychobilly recording artist the Reverend Horton Heat, a/k/a Jim Heath, is so touched by Christmas. The hard-nosed, uncompromising Heath, who has been writing and rendering visceral rock for a generation, is a softie at this time of year.

"There's something about Christmas," Heath said.

"I love playing Christmas songs. Who doesn't like the holidays? I think it goes back to when I was a kid. My dad would climb up on the roof of our house and stomp around with some bells so I thought it was Santa Claus."

"Run Rudolph Run" and "Santa Claus is Coming to Town" are typically part of the Reverend Horton Heat holiday set.

"Those are fun songs," Heath said while calling from Washington, D.C.

Heath will also hit with his intense version of rockabilly. The raw tunes, which recall the power of the late, lamented Cramps, and the charisma of Heath, have earned the band a strong cult following.

“No matter what the musical climate is, there are a lot of people who enjoy the kind of music we play,” Heath said.

“When we started to connect with an audience during the early ‘90s, grunge was hot, but there was a place for us. There have been a number of styles of music which were embraced by the masses since then, but there has always been room for us.”

The power trio’s songs are typically about escapism. Fast cars and even faster women with a beer chaser is typical Reverend Horton Heat fodder.

“You come out and see us and we’ll take you away for a little while.”

Heath and bassist Jimbo Wallace have been playing together since 1989.

“That’s a long time, but we co-exist well together,” Heath said. “We have that connection. We’re coming up on our 30th anniversary.”

Expect the band, which also includes drummer Arjuna Contreras, to release an album in 2018 to mark the occasion.

“That’s the plan,” Heath said. “We’re working on some songs, but it’s early in the process. It’s about time for a follow-up [to 2014’s “REV”]. But we have so much to draw from since we’ve recorded so many albums.”

"We built up a fan base even though our music wasn't exactly in during the period when grunge was so popular. The cool thing is that there are fans who stayed with us over the last quarter century. They've supported us and it's worked out. I run a small business, but fortunately, business has been good. It's a business, but at the heart of it, it's about music, and that's what it will always be about."

The Reverend Horton Heat appears Wednesday at the Ardmore Music Hall, 23 East Lancaster Ave., Ardmore. Big Sandy and the Blasters will open. Tickets are $25 and $35. Show time is 8 p.m.