By Nick Piccone
PhillyVoice Contributor
Wrestling Ring of Honor
from 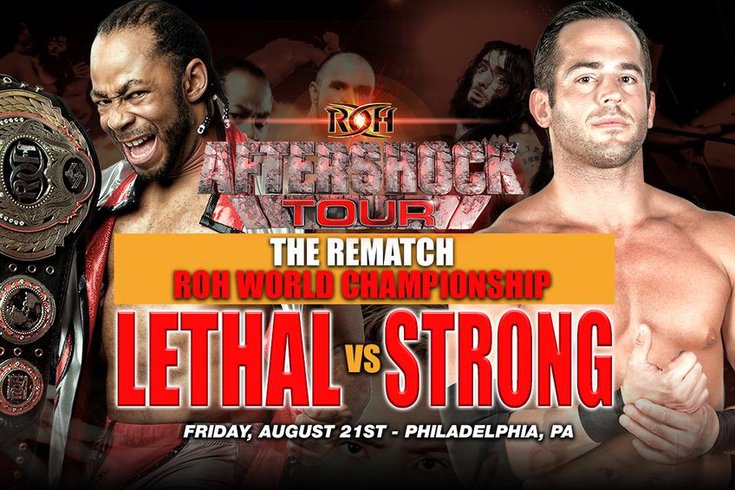 Jay Lethal and Roderick Strong faced each other in a rematch for the ROH World Heavyweight Championship on Friday night.

Ring of Honor, the wrestling based promotion founded in Philadelphia in 2002, returned to their old stomping grounds on Friday night for their Aftershock Tour at the infamous 2300 Arena.

This lineup may air out of order, as is par for the course when it comes to wrestling promotions taping so much content in one night. Ring of Honor taped four episodes of their weekly television series on Friday night in South Philly, and, yes, it definitely did feel way too long.

But there’s one thing that always makes watching a wrestling marathon fun, and that’s when the wrestlers do their damnedest to entertain the audience with every ounce of their being. That’s exactly what happened in South Philly on Friday night, as the best wrestlers of not only Ring of Honor, but New Japan Pro Wrestling, gave wrestling fans a night to remember.

ROH kicking off with an announcement. ROH will bring two full shows to Japan in February. pic.twitter.com/m8FRO63c6k

The night began with a joint announcement concerning Ring of Honor and New Japan Pro Wrestling’s working agreement, and that announcement revealed ROH will be traveling to Japan for two shows in February 2016, and the ROH World Heavyweight Championship will be defended for the first time ever in the Land of the Rising Sun during those shows.

For fans who want a real alternative to WWE, we may have finally found one.

I’m not sure if this match will be on television, or if it was a dark match to prep the crowd. It was a good match and Ali is apparently from Philly, so he got a pretty good reaction. So many people complain when wrestlers don’t win in their hometown, but, conveniently, I didn’t hear any complaining from fans about Ali losing.

reDRagon in the house. pic.twitter.com/xgm3QKtSmI

Fish and O’Reilly may be tied with the Young Bucks and the Briscoes for the most popular tag team in Ring of Honor. The crowd was so loud when they came out and when they won the match, I could barely hear myself speak. That’s saying something.

Castle was over huge with the crowd and has a really great character, which seems to be a flamboyant overactor. I dig it, though. After the match, Stokely Hathaway came out from the back and distracted Alexander, which led to Moose running in from the crowd and spearing him.

The three count and the win for War Machine. pic.twitter.com/fh2ye6LdTJ

The ROH World Tag Team Champions, The Addiction (Christopher Daniels and Frankie Kazarian) then made their presence felt and took out the Young Bucks. On a side note, I’m amazed ROH isn’t booking Rowe and Hanson as monsters who are tearing through everyone and everything. They certainly have the look to be the baddest tag team on the planet. I’m not so sure I even want to be in their line of vision, you know, ever.

In between the first and second episode, while Cheeseburger was trying to throw out free T-shirts to the crowd, he was attacked by Bob Evans’ new monster. Guess who made the save?

Episode 2, billed as the “Championship Edition” of ROH’s TV tapings

Maria Kanellis distracted Matt and Kazarian rolled him up for the pin.

There were several moments where I thought this match was over. This was one of them.

How Kazarian kicked out of that I have no idea. These guys, man. What a great match with a sour ending, because we didn’t get to see the Tag Titles change hands. We actually thought we were going to see a rematch right away, because ROH matchmaker, Nigel McGuinness, came out, but he ultimately announced a Triple Threat Match for the ROH World Tag Titles in San Antonio, TX at All-Star Extravaganza featuring The Addiction defending the titles against The Young Bucks and The Kingdom.

There’s not much I can say about this match. You have to watch it. Lots of near falls, but the match told a great story, especially the ending. While time-wise it didn’t come close to the duo’s 60-minute draw last month at the Death Before Dishonor internet pay-per-view, this match is still way up at the top of my list. Just a great match.

Elgin held Young up in a 30-second standing vertical suplex early in the match, which was awesome. Since this match had the unfortunate task of being placed right after a brief intermission, the two didn’t let that death slot affect their work in the ring.

This was probably up there for my favorite match of the night before Episode 4 was taped. Both ACH and Coleman brought the goods in a spectacular match. There was some high-flying and technical wrestling involved, culminating in an awesome visual of Coleman giving ACH a series of overhead belly-to-belly suplexes while floating over with him and giving him three in a row. Just great work.

And I’ll always love seeing a 450 splash from the top rope. That, the Shooting Star Press, and Neville’s Red Arrow are three of the best finishers high-fliers could have.

This was my first time seeing Okada and Goto in person, and boy can they wrestle in front of any crowd. I’ve watched some New Japan Pro Wrestling on AXS TV the last few months, but seeing Okada in person is something special. People in Japan take wrestling way more seriously than people in America do, so to him and Goto, this was a huge deal. I think Philly made him proud.

Week 4 of these ROH TV tapings kicks off with Matt Sydal vs. KUSHIDA pic.twitter.com/j5oupg27fQ

A bit surprising to see Sydal win here, but it made sense after it was used to set up a future IWGP Junior Heavyweight Championship match between the two. Sydal, who is formerly Evan Bourne in WWE, really held his own against KUSHIDA, despite physically looking a little more worn down than his days in WWE. Sydal missing an opportunity to hit the Sydal Press twice before nailing it on the third time is the perfect “third time’s the charm” for the match story. I’m excited to see the rematch between the two.

Watanabe pinned Ferrara after a series of stiff looking elbows and an STO. The crowd ate it up and chanted for Watanabe after it was over. B.J. Whitmer, who the crowd absolutely loathes and who chanted for him to retire very loudly, confronted Steve Corino at the announce table, but the crowd couldn’t hear anything. I’m looking forward to seeing what that was all about.

This was also the first time I had the pleasure of seeing Nakamura in person, and he really knows how to get a crowd going. From his facial reactions to his style inside the ring and moveset, the crowd was chanting for Nakamura throughout the entire match it seemed like. Cole’s “Adam Cole, baby!” taunt also got some laughs from the audience, because Nakamura taunted Cole with the pose after getting the upper hand a couple of times.

Clearly, the last episode of this TV taping set was to make some of the Ring of Honor stars look stronger than their NJPW counterparts. Sure, Watanabe got the win for his team in the second match, but the war between ROH and NJPW is just beginning, especially with the announcement at the beginning of the night. But, overall, this night was packed with great wrestling action, and I think it’ll come across great on television.

Ring of Honor returns to Philadelphia on December 18th for its Final Battle pay-per-view.

You’ll also be able to watch Ring of Honor wrestling on television every Wednesday night on Destination America [if you have that channel – on Comcast, it’s 873 in HD, 113 in SD] at 11:00 P.M.