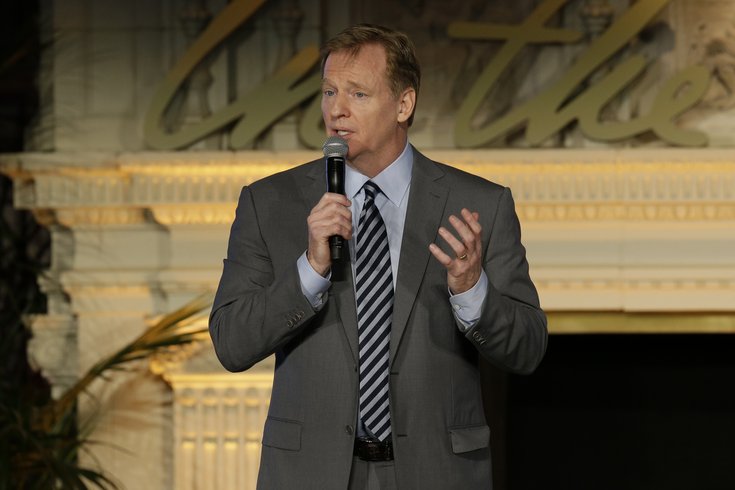 Late in the 2015 season, Giants WR Odell Beckham Jr. absolutely lost his mind when Panthers CB Josh Norman got in his head. The video below shows the worst of Beckham's many incidents that day, but certainly not the only one:

Beckham should have absolutely been ejected from the game that day, as Troy Aikman pointed out during the telecast, but was not. And now Roger Goodell is going to overreact.

Speaking at a his Super Bowl week press conference, Goodell proposed the idea of two personal fouls immediately leading to an ejection.

In the third quarter of a Week 16 of 2014, Vinny Curry was called for roughing the passer against the Redskins. Here's the "All-22" view, which shows that it was not a late hit on the quarterback.

And here's the hit itself, which isn't head to head, or anything else that should draw a flag. (The replay on the telecast didn't show the quarterback throwing the ball, hence the inclusion of the All-22 look above).

In the fourth quarter of that game, Curry drew another roughing the quarterback call when he accidentally hit the quarterback's helmet while trying to swipe at the ball.

By rule, roughing the quarterback was the correct call, but it was in no way a malicious act by Curry.

Under Goodell's new proposed rule, Curry would have been ejected from this game.

Or how about in 2013, when renowned thug Alex Henery was called for a horse collar tackle and a face mask on the same play?

That's two personal fouls, which would lead to an automatic ejection.

If a player is out of control and trying to injure opposing players, like Odell Beckham Jr. was last season, by all means, eject him. However, putting an automatic trigger in place that cannot be overridden by common sense is absolutely idiotic.