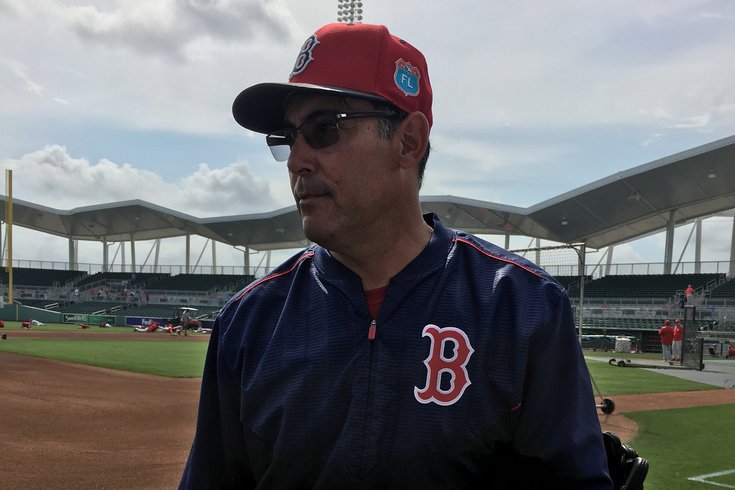 Former Phillies GM Ruben Amaro says he missed “the camaraderie of being in the clubhouse.”

FORT MYERS, Fla. – The handshakes and hugs were constant as the Red Sox walked off the field and the Phillies took over pregame batting practice at jetBlue Park. Odubel Herrera and Cesar Hernandez greeted him. Pete Mackanin, Bob McClure, and Larry Bowa, too.

“Damn, what happened, man?” Bowa said to the man they all greeted, grabbing his waistline. “(You) look good.”

Ruben Amaro Jr., the former Phillies general manager and current Boston Red Sox first base coach and outfielder instructor, said he is down 15-20 pounds in the last six months. But it’s not the result of a somewhat less stressful job title, but instead the rigorous workout routine for the 51-year-old long-time executive-turned on-field personnel.

“It’s a lot more physical than people think,” said Amaro, who worked out at D1 Baseball Academy in Southampton this winter.

This spring, Amaro has moved on, physically and emotionally from Philadelphia. He’s using a fungo to hit fly balls to Mookie Betts, Jackie Bradley Jr., and Rusney Castillo, not sitting in an office and pulling out his hair considering trading away franchise icons like Cole Hamels, Jimmy Rollins and Chase Utley.

“I’m proud of the things we did there,” said Amaro, who was fired after seven seasons as the Phillies general manager in September. “The Phillies are the Phillies and they have their own organization. I was fortunate to be a part of it. I’m on a new chapter now and I’m loving what I’m doing. And I’ve kind of moved on. I mean listen, I’m going to watch and see how (the prospects we acquired) progress, obviously, but for me it’s about moving my own baseball life forward.”

Here is more from Amaro today:

Q: Did you circle this date on your calendar, with Phillies coming to Fort Myers?

Amaro: Yeah, I would be lying if I said this wasn’t interesting and kind of weird. I guess. After being with the organization for so long. Weird. Just different.

Amaro: It’s nice to see some of the guys who are having success. I saw that Cesar was having a great spring, obviously Maikel is doing great. I told Cesar I was rally proud of him, that I was happy. He’s got ability. And I really wish the best for some of those young guys.

Q: Will you take a peak at (Jake) Thompson, (Nick) Williams, (Jorge) Alfaro, see how they progress as prospects?

Q: If those guys click, do you think you’ll be embraced by Phillies fans a little more?

Amaro: Of course when you’re losing in Philadelphia there’s nothing positive about it. We had a direction that we went and we started that direction and hopefully it works out there. Right now I’m concentrating on making sure Mookie Betts and Castillo and Jackie Bradley are getting the job done. I mean, I’m a lot more focused on what’s happening here in Boston than I am in Philly.

Q: Is there a parallel possibly with your former boss, Ed Wade, who finally got some credit after the Phillies won the World Series in 2008?

Amaro: I don’t know, at some point, maybe. At some point I might have interest. I’m still learning. I have so much to learn as a coach still. It’s a new world now. It’s not the same as being a coach in 1975 or 1990 or something like that. It’s a different world dealing with the players, understanding them. A lot of other stuff. Understanding the game - the game has changed as well. So I’m just glad to get this experience and opportunity to be on the dirt with players and being out here. it’s been enjoyable. The other thing, not only is the staff great, but the players are really, really good guys.

Q: Why do you think people would make such a big deal about your career change?

Amaro: I didn’t think about it much when I made the move, other than I just wanted to be involved in baseball again. I think people made a lot more out of it than I did. I’m on the field doing stuff that I did as a player.

Q: When did you first have an interest in the career change?

Amaro: I kind of thought about it a lot over the years at different phases of my front office career, what it would be like to be back on the field, coaching and managing and stuff like that. Not until I was fired.

Q: Do you think legacy would be different if you had won in 2011?

Amaro: It started to go south after ’11 after Howard (got hurt).

Q: Replay that in your mind?

Amaro: No, because all we wanted to do at that stage of the game was play meaningful games in September and October. We were doing it. In ’08 we ended up being the best team in baseball because we won the WoRld Series, but I don’t know if we were the best team in baseball. ehen you get to the playoffs it’s about whether you can execute at that moment, whether you can make the pitch, whether you can get the big base hit, whether you get the ball in the hole right way, we did it in ’08, we didn’t do it in ’09, ’10 or ’11. I’m every bit as proud of those teams. They were good friggin’ teams. They were good teams.

Q: You seem really happy. What are you enjoying the most?

Q: Your administration got hammered constantly for not making analytics an important part of the front office. Was that overdone? You guys did incorporate before this winter, right?

Amaro: We didn’t think it was all that important for us to have to advertise what we were doing. Why do we have to advertise what we do? Am I doing it save my job or what? We were a little behind I think with some of the analytics. The reality of it is we won without the analytics. We had the best team in baseball without the analytics … a full analytics core. Could we have been better? Maybe. There’s always ways to improve, but that’s probably why I’m in a uniform now.

Q: Is there too much of a lean on analytics in the current game?

Amaro: Time will tell. I don’t know. Let other people worry about that. Baseball is baseball. Analytics plays an important role. There’s no question about that. It’s not 'the' role. It’s about people still.

Q: In retrospect, when did you have a hunch that you would be let go?

Amaro: I had an inkling when (team president) Andy (MacPhail) came on (last summer). It was clear that changes were going to be made. That didn’t stop me from trying to do my job. We continued do things the way we operate and hopefully the Phillies will benefit from that.

Q: Are you throwing with both hands?

Q: Have you always been ambidextrous?

Amaro: I was originally a lefthanded thrower. I didn’t throw lefthanded again until recently. So it’s been a long time. I hurt my arm a little bit throwing BP to my nephews. I came here and I was kind of rehabbing it. So I’m still rehabbing it.

Q: Did you ever mess around with pitching batting practice or hitting with a fungo back with the Phillies?

Q: How is throwing BP?

Amaro: It’s not easy. Especially with big leaguers. But I’m aspiring to try to get there. I can do it every day because I can throw both hands. And left-handed BP pitchers are rare.

Q: I guess throwing BP in a Home Run Derby would be the crowning achievement, right?

Amaro: I will have made it. I don’t think that’s going to happen anytime soon.