For Galvis, 2016 a chance to stick with Phillies... with improved glovework 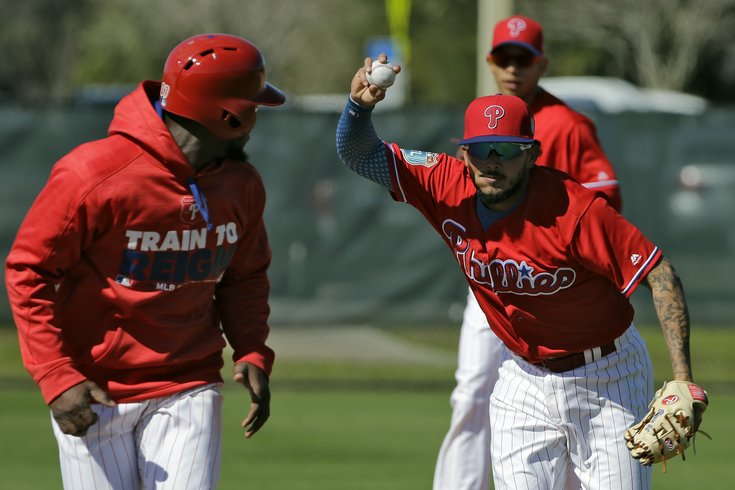 CLEARWATER, Fla. – At the end of a season when nearly every familiar name found their way through an exit sign, on a plane to another big league clubhouse with a different uniform top waiting in their new locker stall, Freddy Galvis took stock of who was still around at Citizens Bank Park.

Sure, 26-year-old Freddy Galvis was born a decade after the last two standing members of the 2008 World Series champion Phillies, 36-year-old Ryan Howard and 37-year-old Carlos Ruiz, but he has been in the organization for nearly a decade. Galvis will celebrate his 10th anniversary with the Phillies this summer (he signed as a 16-year-old out of Venezuela in 2006).

Galvis sat at his locker stall at Bright House Field one recent afternoon and remembered that day. He recalled cheering on his future teammates from his family’s house in Venezuela during the World Series 2 1/2 years later. He reminisced about the days when he was on the fast track, playing alongside Howard, Ruiz, Chase Utley, Jimmy Rollins, Cole Hamels, Roy Halladay, Cliff Lee, and you name it when injuries began to crop up and his sturdy glove (more on that in a bit) was needed on the major league roster.

What Galvis remembers most – even before he had made his major-league debut, but when he was around a Who’s Who of All-Stars at some point every spring – was the confidence level that group brought to the clubhouse every day.

“Winning, winning and winning,” Galvis remembered. “And then losing. Nobody likes that. So that’s something we have to get back. We have to stay together and create that again.”

The Phillies won’t contend again until they have productive pieces scattered throughout their lineup and consistent pitchers plopped throughout their staff. But Galvis sees himself along with fellow veteran Andres Blanco and, of course, Chooch and Howard, as older, more established players who can help lead the Phillies into the next stage of their rebuild.

Part of the reason for the success of the Phillies teams from ’07-’11, according to Galvis, was that they were filled with veterans who had grown together in the big leagues, who knew how to play off of and with each other, and who knew each other better than their closest family members. Galvis is eager to see that take shape with the next generation, even if some of them have already packed their things and headed for minor league camp in the last few weeks.

“I try to help everybody, try to be together – that’s the way we have to be,” said Galvis, a welcome presence in the clubhouse for Maikel Franco and Odubel Herrera, two rookies who thrived with a new-look team last summer. “With young guys, you try to help them out. And we have Whitey (Blanco) who is good with that, too. I think for us it’s about trying to stay together, try to understand everybody, and try to help everybody.”

Galvis would like to be around when that transition is complete and the currently-rebuilding Phillies have put enough new, talented pieces in place on their roster to contend again. He took a step forward with his bat last year, when he hit .263 (and was the team’s best hitter for the season’s first six weeks, batting .381 with a .801 OPS through the Phillies' first 40 games).

But his defense was surprisingly less-than-stellar. Galvis, who dazzled onlookers with his slick glovework each spring and who many in the organization believed had a major league-ready glove as a teenager, was somewhat erratic during his first full season as a major league shortstop.

During the same six-week span when he was seeing his name among the National League batting leaders, he racked up seven errors in his first 39 games. To put that into perspective, Galvis made a grand total of five errors in the 167 major league games he had played in prior to the 2015 season.

“It wasn’t the best,” Galvis said

Galvis has been working with Phillies bench coach and two-time Gold Glove winner Larry Bowa throughout the spring. Bowa, a five-time All-Star who was so exceptional as a shortstop that Pete Mackanin called him “a freak,” has been a champion of Galvis for a while, both a believer in his glove and his bat.

So what the heck happened last year, Bo?

“A couple of things,” Bowa said. “First of all, I think he was playing way too deep. So he had to hurry throws. And the concentration level. He’s the first to admit that there were times he wasn’t hitting and he let that affect him. He’s been good this spring. He’s concentrated, his work ethic is real good, he’s concentrating on getting rid of the ball quicker.” 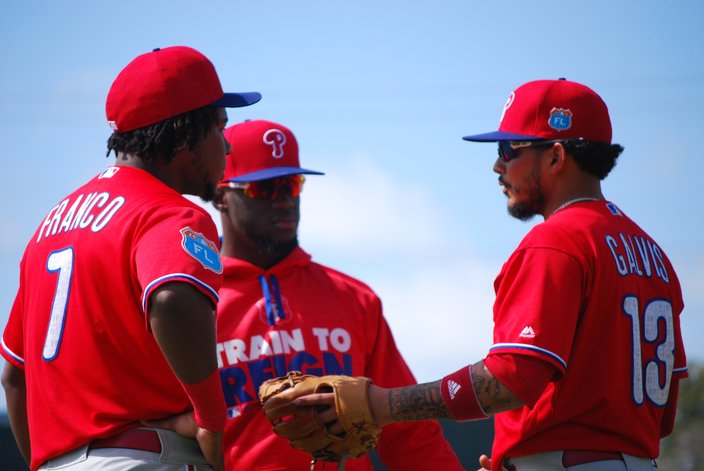 Galvis hopes to be part of next core of Phillies.

Although Galvis managed to survive the rigors of the major league regular season physically, no small feat after enduring major injuries in two of the previous three years, the mental toll was a different kind of challenge.


“I guess it was the first year in a while I was playing everyday, first time in three years,” he said. “Sometimes it was more mental stuff than ability stuff. So that’s something I’ve been talking to Bowa about, about staying in the game, not losing my focus. Play the right way, make plays the right way.

“You try to stay ready for every play. Sometimes if you’re losing by four or five, you might feel tired and your mind goes away from the game and next thing you know there’s a ground ball to you. So you have to be in the position where something is always going to come to you.”

Said Bowa: “I told him, if you don’t get any hits, and you don’t get on base one time, you should be mentally done at the end of the day, by concentrating on every single pitch in the field. Where we’re playing. How many outs? Who’s on first? Can the guy at the plate, does he run good? Should I shorten up? Can I play deeper? There are so many things that go through your head that have to happen before the pitch, not while the pitch is being made.”

While you can normally cast aside spring training statistics as meaningless, maybe it does matter that Galvis has looked once again like his former, sturdy self in the infield this spring. And if there was ever a time and place to lose focus as a veteran, it could surely happen during the monotony of the endless exhibition games in March.

But Galvis has kept his head in those games: he entered Wednesday night without an error.

Sure, it’s just 13 games, but the 78 innings he’s played at short this spring were tied for the most this spring in baseball and the 53 total chances (putouts and assists credit, errors charged) were the most in baseball entering Wednesday. Only four major league shortstops have made more than 40 total chances this spring without committing a single error: Paul Yanish, Charlie Culbertson, and Trevor Story.

But, following a shaky season in the field last summer, a flawless spring is also better than the alternative.

“He can play,” Bowa said. “This kid can play. He can play. He just made some errors that shouldn’t have been made, and he’ll be the first to say he didn’t play very well. There were also stretches where he played outstanding, and then there were stretches you’d go, ‘Wow.’ I’m not even worried about Freddy. I think Freddy is going to be fine.”

If Galvis is fine – continuing to grow as a hitter while playing dependable or above average defense – he could still have a place on the team when the rebuilding transition is complete.

Top prospect J.P. Crawford could be knocking on the big league door later this summer, but Galvis broke into the big leagues once upon a time as a second baseman and played the position brilliantly despite never playing a single inning at second in the minors. The Phillies could do a lot worse than sticking two rangy defenders in the middle of their infield, where strong defense will be vital for a young pitching staff.

“We all know the upside – Crawford is good,” Bowa said. “But he’s got to go out and do it. I’ve seen a lot of guys play Double-A and they’re labeled can’t-miss and they never make it to the big leagues. I don’t think that’s an issue with Freddy. I don’t even think he thinks about it.

“If he plays the way he’s capable of playing, it’s a non-issue. I’m not saying they don’t move people – but I think Freddy should be able top play big league shortstop at a high level.”

For Galvis, who is only two years older than Odubel Herrera but is also still looked at as one of the veterans on the current roster, the desire to maintain his job hasn’t changed, Crawford or no Crawford.

“You always have to be hungry in this game – always,” he said. “You’re always playing for something. It’s not just because young guys are coming up, but it’s because we want to win.”