Philly-native Jules Bass lives on through Christmas classics, like 'Rudolph,' and their pioneering animation style

The producer-director died Oct. 25. He and Arthur Rankin also created 'Frosty the Snowman,' 'Santa Claus Is Comin' to Town' and other popular holiday specials 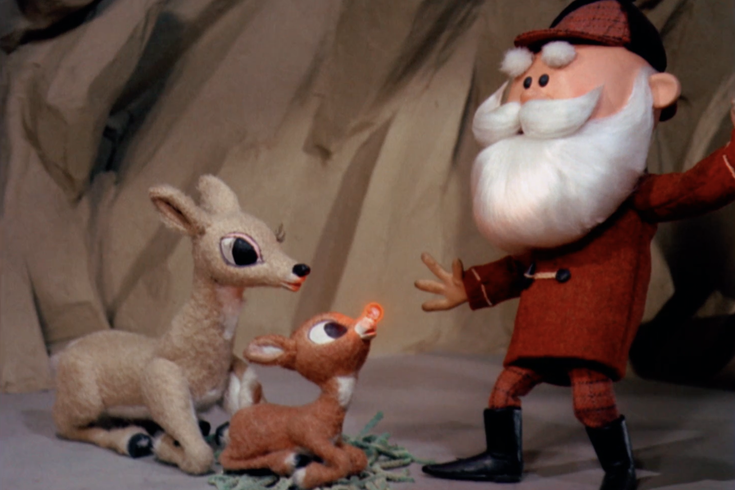 'Rudolph the Red-Nosed Reindeer' was the first hit Christmas special for Arthur Rankin and Jules Bass. Their brand of 'animagic' stop-motion animation was also used in 'Little Drummer Boy,' 'Santa Claus Is Comin' to Town' and 'The Year Without a Santa Claus.'

Arthur Rankin, Jr. and Jules Bass have had the holiday cartoon market cornered since the 1960s.

The creatives behind Rankin/Bass Productions cranked out an astonishing number of Christmas classics in their heyday that remain TV fixtures today, among them "Frosty the Snowman," "Santa Claus Is Comin' to Town" and "Rudolph the Red-Nosed Reindeer," which is the longest running Christmas special in TV history. Most of these holiday films were created with stop-motion animation, a technique that's existed practically since the dawn of film, but the Rankin/Bass look was so distinctive it earned its own name: Animagic.

The magic is still alive as we prepare for the first holiday season without Rankin or Bass, themselves. Rankin died in 2014 at the age of 89, and Bass, who grew up in Philadelphia, died last week. He was 87.

Born in 1935 to Max Bass, a wholesale beer salesman, and Bernice Bass (née Palat), a homemaker and Russian immigrant, Jules lived with his parents and younger brother Howard in West Philly and South Philly, according to U.S. Census records. He moved to New York City to attend college and stayed to work in advertising, which is how he met Rankin. The pair collaborated on roughly 36 films, TV series and specials.

The history of Animagic begins with stop-motion animation. The effect is achieved with a puppet, or similar figure, that can be manipulated into different poses and expressions. Each small movement is photographed, then edited into a film, so that all of the puppet's tiny starts and stops suddenly resemble motion. Besides the Rankin/Bass holiday classics, the effect was seen in movies like "The Nightmare Before Christmas," "Coraline" and "Wallace and Gromit: The Curse of the Were-Rabbit."

Rankin and Bass began experimenting with stop motion in some of their commercial work, as well as their their short-lived 1960 TV series "The New Adventures of Pinocchio." At the time, perhaps the most popular stop-motion work was "Gumby," the children's show that debuted in 1956 starring the  famous, green, claymation character. But the animation Rankin and Bass unveiled in their first holiday collaboration, 1964's "Rudolph the Red-Nosed Reindeer," was several lightyears ahead, thanks in part to its sophisticated character models.

"Animagic's creators point out that the animated characters are dolls, not puppets," the Macon News wrote in 1968. "(They) cost $6,000 each to construct, and appear 3-dimensionally in costume on finished sets. Puppets, they explain, are moved by strings. Animagic dolls are moved by technicians who make the moves on cue from the director."

Because Rankin and Bass constructed the dolls after the story had been scripted and the voice actors were cast and had recorded their parts, the producers could even model these intricate dolls after their actors. The narrator of "Santa Claus Is Comin' to Town," for instance, has the the same jawline, ears and quick feet as the actor who voiced him, Fred Astaire. Along with the familiar actors were familiar songs, all popular Christmas hits long before Rankin and Bass had an animated snow creature belt them out.

As animation historian Jerry Buck explains in the documentary short "The Animagic World of Rankin/Bass," the concept of a Christmas special was totally foreign in the early 1960s. A "special, prime-time, stop-motion spectacular" with already-popular Christmas songs was almost primed for success — especially at a time when most households crowded around one TV with just a few channels. After "Rudolph," Rankin and Bass would crank out similar holiday hits through the 1980s, including "Frosty," "Santa Claus Is Comin' to Town," "Little Drummer Boy" and "The Year Without a Santa Claus."

The impact of the Rankin/Bass specials is difficult, if not impossible, to neatly summarize. Since Rankin and Bass actually outsourced the animation process to Japanese studios, their films occupy an unusual place in anime history — the employees of one of their contractors, Topcraft, would later go on to found Studio Ghibli.

As seen in "The Animagic World of Rankin/Bass," modern directors of holiday and/or animation films were clearly influenced by the famous duo. "The first thing we wanted to animate, we created little snow sets," Stephen Chiodo, one-third of the special effects trio the Chiodo Brothers, says in the documentary. "Christmas elves and a little devil and we had a story with an ice castle. These (were) little miniatures we built down in the basement, and it all came from Rankin and Bass's 'Rudolph' special."

Chiodo and his brothers would go on to work on "Critters," "Marcel the Shell With Shoes On" and the animated sequences of a new holiday classic, "Elf."