The pop superstar will perform at Lincoln Financial Field. Tracks from her 10th studio album, 'Midnights,' occupied the all top 10 spots on the Billboard Hot 200 this week 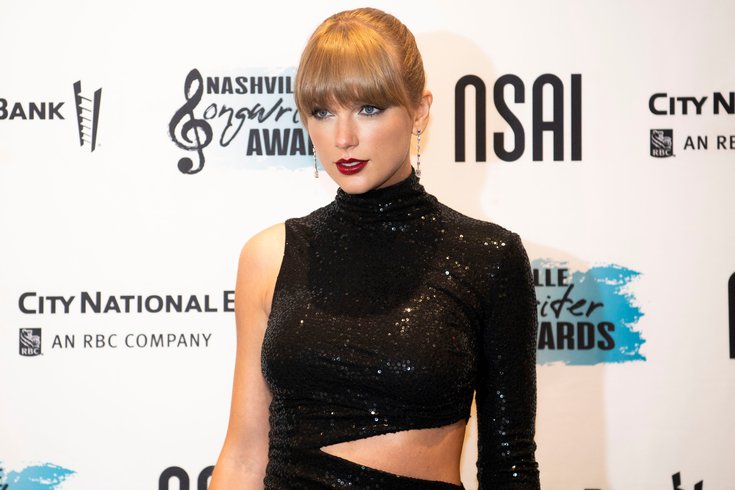 Taylor Swift's Eras Tour includes two concert at Lincoln Financial Field in South Philly in the spring. The singer will play back-to-back shows on May 12 and May 13, with opening acts Phoebe Bridgers and GAYLE. Tickets go on sale Friday, Nov. 18, but fans can sign up for Ticketmaster's Verified Fan presale for early access.

Taylor Swift will perform back-to-back shows at Lincoln Financial Field next spring as part of her Eras Tour, the pop singer announced on Tuesday.

The 11-time Grammy Award winner will take the stage in South Philly on Friday, May 12, and Saturday, May 13, accompanied by opening acts Phoebe Bridgers and GAYLE. Tickets go on sale Friday, Nov. 18 at 10 a.m. Swift said the concerts on the tour will include music from her entire catalog. She has released six albums since the conclusion of the Reputation stadium tour more than four years ago.

Swift broke the news of the Eras Tour on "Good Morning America" on Tuesday.

"I wanted to tell you something that I've been so excited about for a really long time, and I've been planning for ages. And I finally get to tell you I'm going back on tour" Swift said in a recorded clip played during the morning show. "The tour is called the Eras Tour, and it's a journey through all of my musical eras of my career."

The Reading native first teased the possibility of a tour during her an appearance on "The Tonight Show Starring Jimmy Fallon" on Oct. 24, while promoting her 10th studio album, "Midnights." The singer, who is well known for her elaborate album promotion, told Fallon that her next tour would happen when the time is right.

Swift hasn't toured since 2018's Reputation tour, which included a stop at Lincoln Financial Field. Though she had said she would tour her 2019 album "Lover," the plans were scrapped due to COVID-19.

Since her last tour, Swift has released four original albums — "Lover," 2020's "Folklore" and "Evermore," and "Midnights," — along with two re-recorded versions of her past work, which had previously unreleased songs.

There are 28 concerts scheduled for the U.S. leg of the Eras Tour.  International dates were promised, but dates have yet to be announced.

Eras kicks off March 18 in Glendale, Arizona, with opening-act performances by Paramore and GAYLE. Other supporting acts joining the highly-anticipated tour include MUNA, beebadoobee, girl in red, HAIM, Gracie Abrams, and OWENN.

Bridgers and HAIM are recent collaborators with Swift. Bridgers teamed up with Swift on "Nothing New," a previously unreleased track added to "Red (Taylor's Version)," the re-recorded version of the singer's 2012 smash-hit album. Indie pop trio HAIM were featured on "no body no crime," the murderous ballad on 2020's "Evermore."

me with the new taylor swift tour pic.twitter.com/aUfTphrAey

taylor swift’s setlist for her “ts the eras tour” pic.twitter.com/82id1zh4SL

me at taylor swift’s “the era tour” concert: pic.twitter.com/HKFWVROmF4

me walking into the taylor swift eras tour after selling my kidneys to get tickets:#TSTheErasTour
pic.twitter.com/HSy1KWlpQN

If taylor swift goes on tour i need her to play every song from lover, folklore, evermore and midnights even if it takes 13 hours

Those who previously purchased Verified Fan tickets for Swift's Lover Tour , and who register the Eras presale using the same account, will receive preferred access to participate in the TaylorSwiftTix Presale, according to Ticketmaster.

The tour announcement comes less than two weeks after Swift released "Midnights," which became the top-selling album of the year in just one day and broke Spotify's single-day record for streams. On Monday, Swift became the first artist to claim all 10 spots on the Billboard Hot 100 at one time.

The album had more than 1.5 million sales in its first week. This is largely due to physical media — though Swift's 3 a.m. deluxe version of "Midnights" was released as an entirely digital album, the singer released four different physical versions of the standard edition, some including bonus songs not available on streaming platforms.

"Midnights" is available to stream or purchase. Fans can also check out the album's second music video, for "Bejeweled."