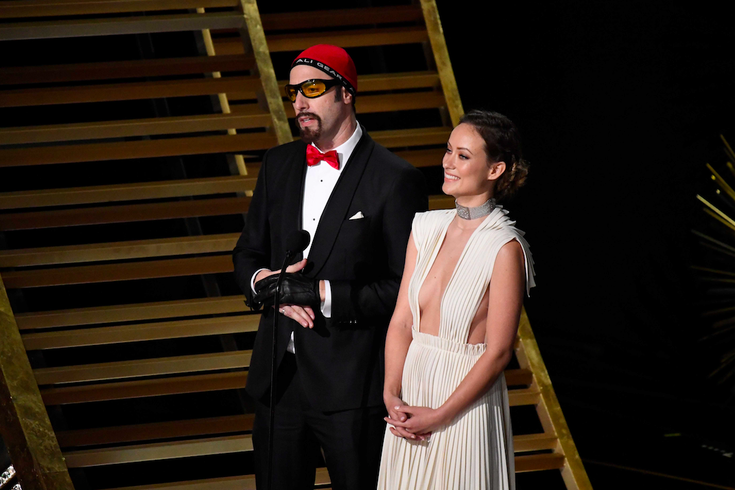 Sacha Baron Cohen and Olivia Wilde introduce the clips for Best Picture nominees "Room" and "Brooklyn" during the 88th annual Academy Awards at the Dolby Theatre in 2016.

Sacha Baron Cohen's return to the world stage has been predictably awkward, hilarious and questionable — all signatures of the British comic's satirical charades and disguised personas.

Cohen's Who Is America? Showtime series brings his pranks right up to the highest levels of U.S. politics, which isn't exactly uncharted territory. The key difference is that it seems impossible for such important figures to be so incredibly stupid.

When Newt Gingrich and Ron Paul rebuffed Cohen in the past, they at least saved face to some degree. Things have changed in 2018.

Former U.S. Senate candidate from Alabama Roy Moore's willingness to take a "pedophile detection" test isn't even the worst of what we've seen so far. Jason Spencer, the elected official who screamed the N-word and dropped his pants for Cohen, is now a former Georgia congressman thanks to his participation in the new series.

There's been plenty of critical reaction to the mini-controversies now arising from "Who Is America?" Some are questioning whether the show's humor fits into the political environment surrounding the Trump administration. Will Cohen's incursions ultimately cost opponents of the current regime? Does it paint the opposition as juvenile and underhanded?

Cohen's Bush-era comedy wasn't without controversy either. His 2006 film Borat was perceived as disparaging toward Arab culture and 2009's Bruno was deemed grossly offensive by some in the LGBTQ community.

Only Ali G, the "voice of da yoof," seems to have survived with a relatively clean record.

That brings us to an old episode of "Da Ali G Show," which debuted in 2000 and aired on HBO from 2003-2004. Cohen's visit to the Philadelphia Police Department didn't age particularly well in light of police-community tensions that have surfaced over the last decade — it is, as always, possible to take offense here — but the skit remains a relic and offers Ali G's characteristic laughs.