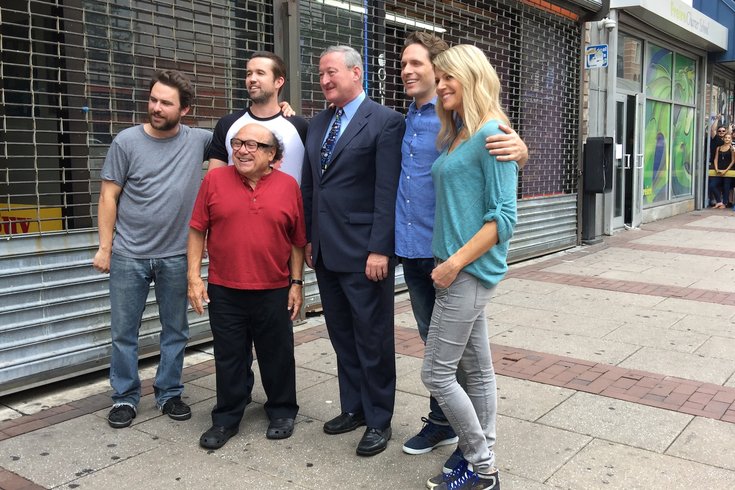 One of the most endearing facts about "It's Always Sunny in Philadelphia" — actually, of the only ones — is the marriage of co-stars Rob McElhenney and Kaitlin Olson, who fell in love during the early seasons of the long-running FXX comedy.

Married in 2008, the couple now have two kids together and are getting ready to premiere the 13th season of their hit series in September.

How they fell for each other wasn't public knowledge, Olson recently disclosed on the Armchair Expert podcast, where she was the guest of Dax Shepard, a former co-star with "The Groundlings" in Los Angeles.

Shepard, who's close friends with Olson and McElhenney, broached the subject during a conversation that extended more than two hours. Olson explained that she and McElhenney, the show's creator, didn't gravitate toward each other romantically right away, but he made an immediate impression on her.

"Halfway through the first season, talk about types, he just ... he was just so easily in charge," Olson said. "He really just has a vision and he's just a wonderful boss and he's a collaborator, but at the end of the day he's very comfortable taking in information and then just making a decision."

Olson said the lines, in Shepard's words, got "blurry as f---" when there was some kind of Fox party, alcohol was involved and she decided to make a move.

It was very awkward, just awkward," Olson said of the game she attended with several other cast mates. "I had been drinking because that's how I handled being nervous around him. And I would just move in to sit at the game and back up in between his legs, and like move myself into his lap. And he was just like, 'What—what are you doing?' That's the other thing about Rob. He's unbelievably direct. Like, honest to a fault.

The romance progressed from there—and Olson said she knew how McElhenney felt long before he even realized it.

It took him a while to realize … it was a very interesting dynamic. Like, once I fell in love with him, I realized that I was deeply in love with him in a way that I hadn’t been in love with anyone before. And then we started secretly dating, and he really just wanted to be casual, but I had this hubristic confidence that this person is completely in love with me—and he has no idea. It wasn’t even a game. It was just like, oh, you don't know, you have no idea that you are completely in love with me. You want to have it casual and just date, and yet you’re calling me every Friday night and you’re spending the night on Saturday night and you’re seeing me on Monday morning.

The most hilarious part of their courtship is that McElhenney was living at the time with co-star Glenn Howerton, who had no idea any of this was going on.

"Glenn would come to work jealous and be like, 'God, Rob is just like, he's just out there at bars, just like, meeting people? F---ing every bar he goes to, he goes and spends the night at her house!'"

No wonder Dennis Reynolds evolved into a psychopath.

Olson said the secret lasted through two seasons of "It's Always Sunny in Philadelphia" before the rest of the cast was in the know about her relationship with McElhenney.

The full conversation with Olson is well worth a listen as she discusses a traumatic childhood bike accidents, dealing with insecurity, motherhood and the various characters she's played throughout her career. The conversation about McElhenney begins around the 1:06 mark.

Season 13 of "It's Always Sunny in Philadelphia" premieres Sept. 5 at 10pm ET on FXX.