WMOF2015: Sacrament of marriage has waned among Catholics

Saying yes to a relationship is a first step, speaker tells World Meeting of Families session 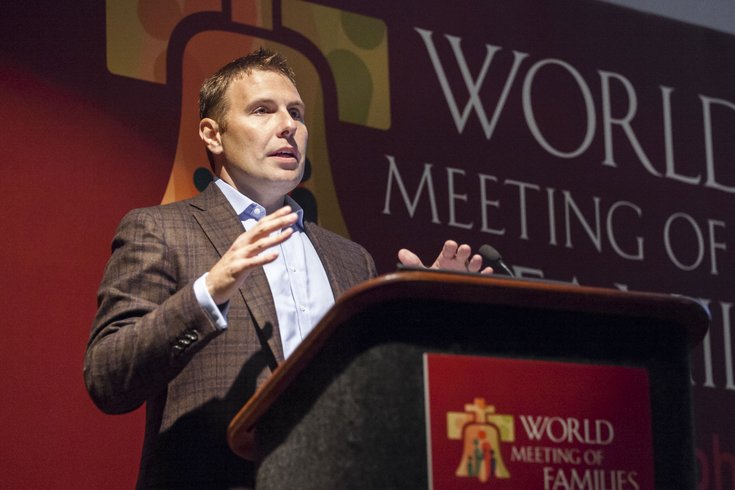 Brian Barcaro, co-founder of CatholicMatch.com speaks on a breakout panel entitled: "Where is this Relationship Going? Dating and Discernment".

The statistics are grim for dating and marriage, in general and among Catholics, despite an emphasis on marriage and family.

Brian Barcaro, CEO and co-founder of CatholicMatch.com, kicked off a discussion of "Dating as Discernment" at a session during the World Meeting of Families on Wednesday by reciting statistics that show the decline.

A decade ago, one in 10 Americans over the age of 40 were never married. Today, the percentage is one in five, or 42 million.

The numbers look worse for women, he said, with 23 percent of the country's females unmarried versus 17 percent of men over 40.

And projections for members of the millennial age cohort are even worse, he said, heading toward 30 percent of all female millennials being unmarried by the time they reach 40.

The decline of marriage within the Catholic faith is in keeping with declines in the general population, too.

A decade ago the Archdiocese of Chicago performed 16,000 sacramental marriages; last year just 6,000.

Barcaro's Catholic-oriented website is much like any other dating site on most points, but it does have Catholic profile questions, such as "Who is your favorite saint?"

Danielle Bean, editorial director of Catholic Digest and a mother of eight who contributes to CatholicMatch, told attendees that human life only makes sense within relationships with others and with God.

She conducted a real-time poll of the audience and created a word swarm about the issues with dating. Top words were: time, commitment, fear and sex.

She told the audience that means it is sometimes important to say "yes," even without knowing details.

After the session, audience member Jacqueline Fague, a mother of six in her 40s from suburban Boston, agreed that taking the "plunge" is sometimes important when it comes to dating

Westin Edward, an 18-year-old from South Carolina who is in Philadelphia on a planned pause between high school and college intended to help students find their vocation, wasn't so sure. He has just ended a serious dating relationship.

"Saying 'yes' can be overwhelming," he said, adding he hopes to rely on his experience and religious teachings as he again sets about establishing a new relationship.

"I'm here because I'm trying to learn about me and how I handle relationships," he explained.

He said his interest in theater, music and film sometimes makes it hard for him to be authentic in a relationship – because he falls back on performing when he is dating.

"I want to be seen as a good person," Edward said.