Safety Blitz with Malcolm Jenkins: 'The holiday season is always special to me'

For the veteran Eagles DB, Christmas is much more about giving than it is receiving...

This is a good time of year for Malcolm Jenkins — but it wasn’t always that way. The Pro Bowl safety and two-time Super Bowl champion is a December baby, whose birthday just so happens to be — drum roll, please — today, December 20.

“I love this time of year, it’s a time of year I’ve always enjoyed, especially now that I have two daughters, one who’s maybe a little too young to remember her first Christmas, but my oldest just turned five and she loves the Christmas season,” Jenkins declared. “I’m a December baby, so the holiday season is always special to me — I got both Christmas and birthday presents. It’s a fun season for everybody.

“I just found a ton of home videos of when I was a kid that I’ll show to my kids. I didn’t have a beard then (laughs), but I had a lot more hair on my head back then though. They’re from when I was when I was around 12 or 13, when you’re at that age when you only get clothes for Christmas and stop getting all of the cool stuff you did as a kid. But sometimes, it kind of sucked for me, because I got shorted a couple gifts during Christmas season, because my birthday just occurred.”

Gwendolyn Jenkins, Malcolm’s mother and the president of the Malcolm Jenkins Foundation, refuted the notion with a big laugh.

“Malcolm is the oldest, and he always got everything he wanted,” Gwendolyn said, giggling. “When I tell you he was spoiled, he was spoiled.”

One thing that’s been special — and growing — is the annual Malcolm Jenkins Foundation Holiday Dinner Basket Surprise, which Malcolm Jenkins has done for each of the five seasons he’s been with the Philadelphia Eagles.

Partnering with Antioch Baptist Church and the City of Camden (NJ), College Track New Orleans (LA) and the Philadelphia Police Department’s Police Athletic League (PA) for the last three years, the Foundation and its team of volunteers assembled and distributed holiday meal baskets for 420 household across the three locations.

Since 2011, the Malcolm Jenkins Foundation’s Holiday Dinner Basket Surprise program has served more than 1,385 families. This year, with a financial grant from BNY Mellon and in-kind sponsorship from ShopRite Supermarkets operated by the Brown Family, the Foundation has expanded its program to include 140 families residing in the City of Camden, NJ, a community in which 35% of households live below the poverty level. Through its expansion to three states, this year’s effort supported an all-time high 420 families.

“We expanded this year to Camden, and the biggest priority for me is thinking about other people and providing some relief during the holidays for some people who may not have the means, so they’re not scrambling around to find gifts for their kids, or don’t have a good meal,” Malcolm said. “I always want to make sure those less fortunate have something.

“I know it doesn’t fix everything, but it’s something to help people.” 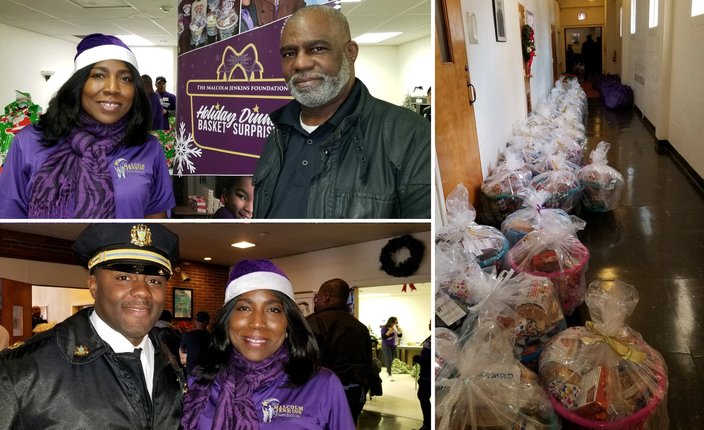 On Monday, a group of volunteers and Philadelphia police officers came together to empty trucks full of toys and food, place them baskets to wrap and distribute.

“This is the third year in a row where the Police Athletic League has partnered with the Malcolm Jenkins Foundation, and I can’t express the amount of appreciation I have for the numerous volunteers we have here right now, including Malcolm’s parents and his wife,” said Philadelphia Police Captain Jarreau Thomas, the head of PAL, which helped in delivering the baskets. “To see the level of involvement Malcolm and his family have is very encouraging, because there are numerous foundations that I think of where the people whose names are on these foundations are nowhere to be found.

“I see Malcolm’s mother, his father, his wife and even his youngest daughter here, which means a lot to me personally, and to the community, and shows that you genuinely care enough to get your hands dirty and do all of the work. It means a lot.”

“I wanted to make sure some good things happened for some people,” Malcolm said. “Everyone should have fun during the Christmas season — but, unfortunately, many don’t. We’re just trying to provide some relief.”