Former Sixers general manager Sam Hinkie and his Process didn't really need much more validation in the wake of Bryan Colangelo cashing in some of his coveted assets to land the first pick in the NBA Draft, Markelle Fultz – but I guess no one thought to remind James Dolan and the New York Knicks.

Had it not been for The Process, that could be the Sixers right now. Just let that sink in for a moment.

On Wednesday, the Knicks fired Phil Jackson after he spent three seasons wreaking havoc on the franchise, all the while seemingly without a plan to actually build a contender. And when you compare his three seasons in New York with Hinkie's tenure in Philly, it becomes a fascinating case study in how to best run an NBA franchise, one more owners should probably consider before hiring their next GM.

In the decade prior to Hinkie’s arrival, the Sixers won exactly one playoff series (2012) in five appearances – and they had no business beating the Bulls that year, as a Derrick Rose injury paved the way for an upset that can be credited to little more than some good luck.

Not once during that time did they have a legitimate chance at contending.

Similarly, the Knicks had been to the postseason four times, advancing past the first round just once. Both teams’ playoff runs came to an end in the conference semis, were followed by a lost season in which they missed the playoffs, and ultimately resulted in the head coach and general manager being replaced.

However, that lack of winning didn’t exactly translate into high draft picks. The Sixers only twice picked in the top 10 during that span – they took Andre Iguodala 9th in 2004 and Evan Turner 2nd in 2009. The Knicks, on the other hand, had three top-10 picks in the decade that preceded the Phil Jackson era: Channing Frye (8th overall, 2005), Danilo Gallinari (6th overall, 2008) and Jordan Hill (8th overall, 2009).

The two teams were stuck in NBA purgatory, a place that offers no hope of a title but provides just enough winning to stay cost-effective.

It’s how the Sixers were able to have four different coaches – Mo Cheeks, Tony DiLeo, Eddie Jordan, and Doug Collins – in a three-year span that was bookended by a pair of playoff appearances. As for the season in between those two first-round exits, the Sixers finished 27-55, one win worse than they did in their most recent campaign.

It’s also what led the Knicks to changes coaches six times in the last dozen seasons, with the longest tenured being Mike D’Antoni, who went 167-121 (.420) in three and a half seasons and the most successful being Mike Woodson, who went 109-79 (.580) in his two-plus seasons as coach.

They tried adding Carmelo Anthony. Nope. Amar’e Stoudemire. Nothing. Even older vets like Jason Kidd, Rasheed Wallace, Kenyon Martin, Marcus Camby, and Quentin Richardson never actually made the team appreciably better – maybe in 2001, but not in 2011 when they all appeared on the Knicks roster at the same time.

Instead, they were merely names – not unlike Phil Jackson – that people recognized and had the ability to draw a crowd. Not bad enough to land a top draft pick, not good enough to contend for the title, and often paralyzed by the salary cap due to awful free agent signings and deadline trades made simply to give the appearance of effort while somewhere deep down you know it's going to ultimately be a waste.

That’s what makes it purgatory.

We've now reached the point where these two stories split. The similarities begin to give way towards drastically opposing beliefs on the best way to build a contender and ultimately escape from purgatory.

The Sixers decided to break free from that cycle of false hope and inevitable disappointment when they hired Hinkie, then a relatively unknown assistant general manager in Houston, following the 2012-13 season.

Many Knicks fans were hoping for the same when their team hired Jackson in 2014. Unfortunately, one could argue that after his three years at the helm, they're as far as they've ever been.

By hiring Hinkie, the Sixers were taking the long view, something about which the now-former Sixers GM spoke often. But when compared to the decade that preceded it, Hinkie’s Process was never actually going to take that long.

For all the losing that Sixers have done in the last four years – and there’s been a lot of it – there’s no way you can argue that the team is in a worse position than they were when he first took over. The record, sure, but what about the future? Just compare the starting lineup Hinkie inherited to the one they’re projected to roll out this fall (thanks to some deft draft deals by his successor, Bryan Colangelo):

It ain’t even close.

Meanwhile, the Knicks are basically left with Kristaps Porzingis – he’s really good and coincidentally happens to be a Knick only because of Hinkie’s worst move* as GM, drafting Jahlil Okafor – and the hope that they can build around him moving forward.

*To be fair, it's been reported that Hinkie was under pressure from ownership to draft Okafor over Porzingis.

He's recently been the subject of trade rumors, as has Anthony, largely due to tensions with Jackson. Back in April, the Zen Master suggested that his perennial All-Star "might be better off somewhere else." Interestingly enough, personality (or lack thereof) was often an insult hurled at Hinkie during his tenure. Just ask the Sixers best player, Embiid, what he thinks about his former GM.

But because he had a much more impressive résumé, Jackson was given a sort of leeway that Hinkie was never afforded. And unlike Hinkie, he was never asked to spell out his plan – are we sure he ever had one in the first place?

Comparisons like this are the perfect reminder that no matter what you thought about Hinkie and the Sixers' decision to put roster construction, asset collection and player development ahead of short-term success, he at least came in with a plan.

The same can't be said for Jackson. 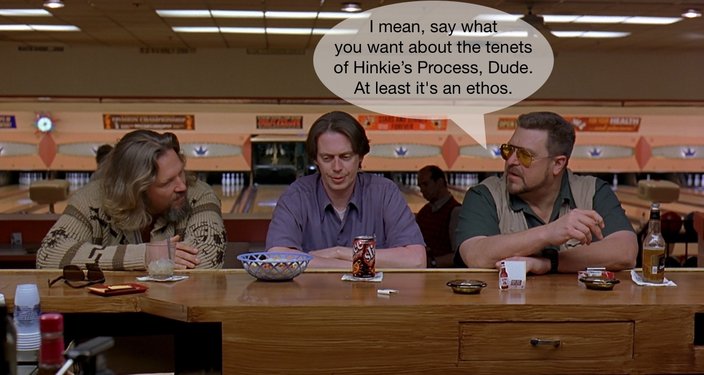 It's a shame that Hinkie was never given a chance to see his plan through – and perhaps he would've been able to if he had a Phil Jackson-like resume – but at least so far it seems like Colangelo and the Sixers haven't completely discarded his process.

Now, as the Knicks look to replace Jackson, perhaps they'd be wise to avoid the same mistake they made three years when they hired him. They need a GM that has a plan, not one that manages to sell tickets for a few years by staying marginally relevant before leaving you worse off than before.

Wait, I know a guy like that who is currently looking for a job...