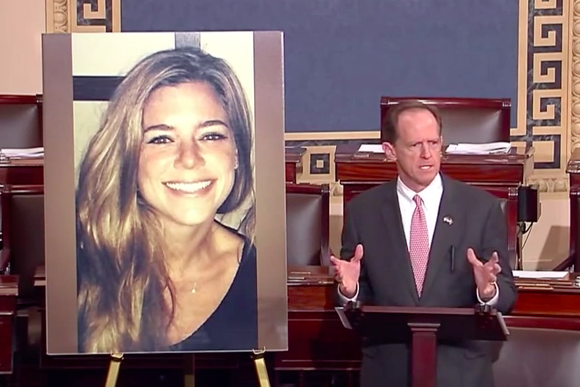 The Stop Sanctuary Policies Act, a Republican-backed bill that would withhold some federal funding from so-called "sanctuary cities," failed to reach the 60 votes necessary to advance beyond a test vote.

Such policies came under scrutiny in July, when an undocumented immigrant and convicted felon allegedly murdered a woman in San Francisco. Congressional Republicans rallied around the case, passing a similar bill in the House of Representatives, while President Barack Obama vowed to veto such legislation.

Sen. Pat Toomey, R-Pennsylvania, has been among the more vocal opponents of "sanctuary cities," saying such policies undermine federal immigration laws. He urged the bill's passage from the Senate floor Tuesday as he stood beside a photo of Kate Steinle, the San Francisco woman whose death in July pushed sanctuary policies into the limelight.

Citing the U.S. Department of Homeland Security, Toomey said, "sanctuary jurisdictions" released more than 8,000 undocumented immigrants during an eight-month stretch last year. Some 1,800 of them later were arrested for criminal acts, he said.

"I completely understand the vast, overwhelming majority of immigrants would never commit such crimes," Toomey said. "That's not what this is about. The truth of the matter is any large group of individuals is going to have a certain number of criminals within it. And of the 11 million people who are here illegally, some are inevitably violent criminals."

Philadelphia has been a "sanctuary city" since April 2014, a policy shift that drew praise from the immigration advocates. Police cannot detain any undocumented immigrant who otherwise would be released pending trial – unless they have been convicted of a violent felony and the detainer is supported by judicial warrant.

The Senate bill would have penalized "sanctuary cities" by withholding federal funding for community development block grants and Community Oriented Policing Services funding. It also would have increased several penalties for undocumented immigrants who illegally return to the United States after being deported.

Sen. Bob Casey, D-Pennsylvania, opposed the bill, saying Monday that it would "drastically cut" funding for law enforcement and community development at a time when cities, like Philadelphia, are strapped for cash.

The three Democratic candidates running to unseat Toomey in 2016 hold varying views on the legislation.