Also during the episode, Palmer surprised the crowd during her monologue by revealing she is expecting her first child 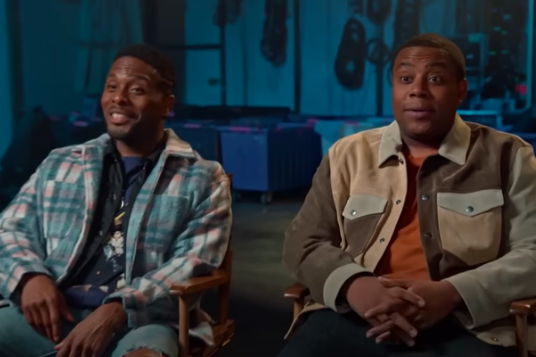 Millennials watching "Saturday Night Live" this weekend received a hilarious surprise when the comedic duo behind '90s hits "All That," "Kenan & Kel" and "Good Burger" joined forces once again on screen.

During the Dec. 3 episode, hosted by Keke Palmer with musical guest SZA, the longest-running SNL cast member in history, Kenan Thompson, was reunited with Nickelodeon partner in crime Kel Mitchell during a segment reimagining "Kenan & Kel."

The sketch, titled "Kenan & Kelly," is a mockumentary in which Palmer tries to pitch Thompson a reboot of "Kenan & Kel," the buddy comedy he starred in with Mitchell that ran from 1996 to 2000, and celebrated its 26th anniversary in August.

Palmer's "reboot" idea sees her starring as Kelly, a stand-in for Mitchell's role, in a dramatized version of the sitcom in which she is pregnant with Thompson's character's child. Kelly's catch phrase is, "Uh-oh, here comes the bus!" rather than Kel's, "Aw, here it goes!"

"Keke was gunning for an Emmy Award," Thompson says in a fake confessional during the skit.

As the shenanigans continue, SNL cast member Devon Walker performs an impression of Mitchell's famous "Good Burger" quote for Thompson, who quickly shuts him down. “I think we already found someone,” Thompson said.

At that point, amidst cheers from the audience (as well as Thompson and Palmer), Mitchell makes his grand entrance into the set, heading straight for the case of orange soda, a drink his character famously enjoyed.

The warm welcome is short-lived, though, as Mitchell is soon shot by a robber and, as he bleeds out, Palmer reveals she is actually pregnant with Kel's child, not Kenan's. All's well that ends well, because Mitchell and Thompson reveal in another mock confessional that they have other plans.

“The show is not good, but Jordan Peele called us,” Thompson said.

"He wants us to do a sequel to 'Nope,'" Mitchell added.

Naturally, '90s kids took to Twitter to express their excitement over seeing the shoutout to the iconic sitcom, as well as the reunion of the comedic duo.

Name a more iconic duo. Kenan and Kel were 90s television you hear me? 👏🏾👏🏾🔥🔥 #SNL pic.twitter.com/rzdSL5NSfM

The Kenan and Kel reunion is what 2022 needs https://t.co/efZSvQOoDx

Yeahhh.... this needs to happen for sure. #KenanAndKel Reunion movie! I loved seeing these two together again. pic.twitter.com/sj9TpLJd8q

Whether a "Kenan & Kel" reboot could actually happen is unclear, but the pair has been working on a sequel to their 1997 film "Good Burger." The existence of a sequel was teased on Instagram in July, and Mitchell and Thompson revealed in October that the script was written and a table read had gone "really good."

Palmer was also a Nickelodeon staple, starring in the series "True Jackson, VP" from 2008 to 2011. Most recently, she could be seen in this year's acclaimed Jordan Peele horror film, "Nope."

During her monologue, Palmer shocked the audience by revealing that she is expecting her first child.

"I'm especially glad to be here, though, because there's some rumors going around," Palmer said. "People have been in my comments saying, 'Keke's having a baby. Keke's pregnant.' And I want to set the record straight. I am."