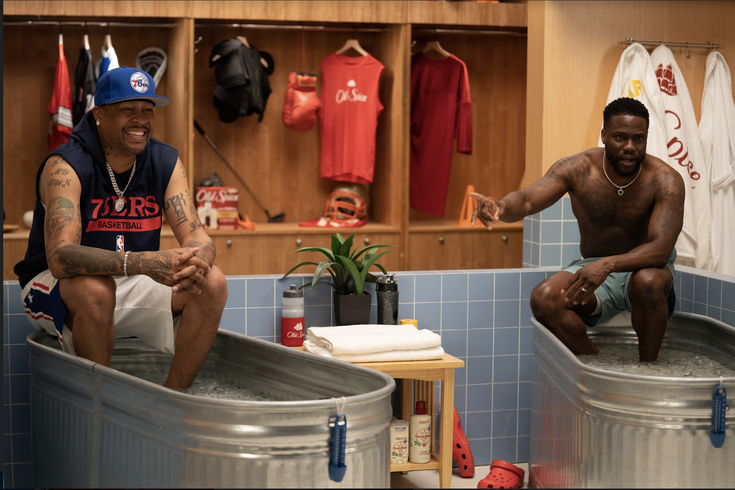 76ers legend Allen Iverson sat in the cold tub to talk with Kevin Hart on his 'Cold as Balls' series. The former MVP discussed his regretable rap album, the NBA's dress code and his status as a fashion influencer in the league.

Allen Iverson won over the hearts of fans not only in the City of Brotherly Love but across the globe with his swagger and success as an undersized basketball player relentlessly attacking the basket.

While the former 76er's career is most notable for ankle-breaking crossovers and insane point averages, Iverson also set trends with his oversized T-shirts, throwback jerseys, durags and fur coats off the court. Looking back on it all, he has one big regret.

Sitting in a bucket of ice water on the sit of Kevin Hart's YouTube series "Cold as Balls" on the LOL Network, Iverson reminisced on his relationship with the late David Stern, the NBA's former commissioner.

He said their relationship wasn't the greatest, especially when Iverson released a rap song, "40 Bars," under the name Jewelz. The song was a part of a hardcore rap album he planned to release. But, looking back on the album, he admitted it was a little embarrassing.

"It wasn't a great relationship when I did that terrible rap album," Iverson said, trying not to laugh. "When I did that bull, that's when I had a problem with David Stern. I remember going into the office, and he was reading my lyrics. David Stern was reading '40 Bars' off a piece of paper, Kev, and I was trying not to laugh because I knew how serious it was and what I was saying. But, obviously, you know what I was saying, so to hear David Stern rapping it was crazy."

At the time of the song's release in 2000, Stern set up a meeting with Iverson and demanded he change the controversial rap lyrics.

Stern said, "The lyrics that have been attributed to Allen Iverson's soon-to-be-released rap CD are coarse, offensive and anti-social." "However, I have come to understand, unfortunately, that certain rap artists regularly spew such lyrics to a wide audience at great profit to some of America's most successful entertainment companies."

Coincidentally, the album, which was supposed to debut in February 2001, Iverson's MVP season, was scratched, and that was the end of Jewelz the rapper.

Iverson also talked about the origin of his nickname, Bubba Chuck. He said that he had an uncle named Bubba and one named Chuck who got into an argument over what his nickname should be when his mom intervened, offering a compromise with Bubba Chuck.

"The Answer," who was part of the only U.S. Olympic men's basketball team featuring NBA players to not bring home a gold medal, also opened up about being hurt when he was not asked to play for the 2008 "Redeem Team."

"I definitely didn't want to make a big deal about it out of respect for the guys that they did choose; those are my guys, you know me, and I rooted for them to the end but deep down, it bothered me. It hurt," Iverson said.