The science of ... Pixar: New exhibit is a homage to STEM 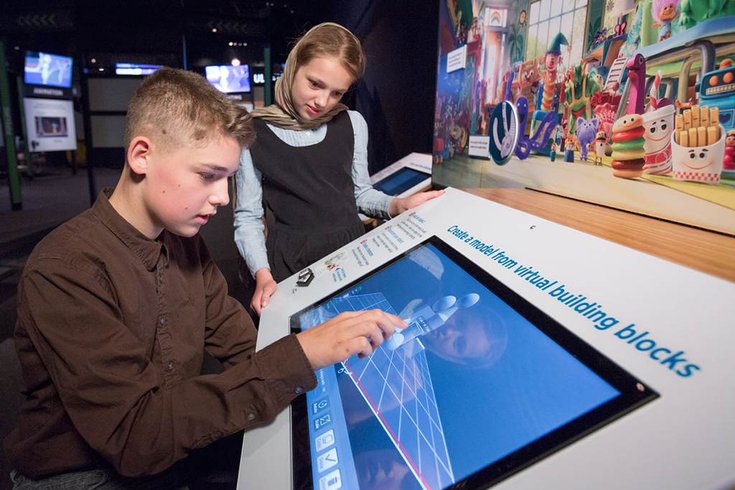 A boy uses software to create a virtual 3D model at "The Science of Pixar" exhibition at The Franklin Institute. It opens Saturday.

In 1995, Pixar Animation Studios made its production debut on the big screen with "Toy Story," marking the very first feature-length, fully computer-animated film in history. Audiences and critics everywhere adored the dynamic between Woody and Buzz, who became household names, and the movie grossed $362 million at the box office.

"Toy Story" proved to the world that computer technology could carve out a whole niche of its own in filmmaking.

Fast forward more than 20 years, and Pixar has become a juggernaut in the film industry. The studio has produced 16 computer-animated feature films that have garnered $9.7 billion worldwide and won 15 Academy Awards, including eight for Best Animated Feature.

While the studio is perhaps best known for its earnest and heartfelt storytelling, every film is also a technical tour de force. The creation of a Pixar movie takes an average of 4 to 5 years from story conception to release, with hundreds of people working on both artistic and technical aspects of the film.

The Franklin Institute's newest exhibition, "The Science Behind Pixar," highlights the importance of STEM fields — science, technology, engineering, and mathematics — throughout this filmmaking process.

"What makes Pixar phenomenally unique is that blend that you've heard about of art, science, mathematics, and computer engineering," said Frederic Bertley, senior vice president of science and education at the museum. 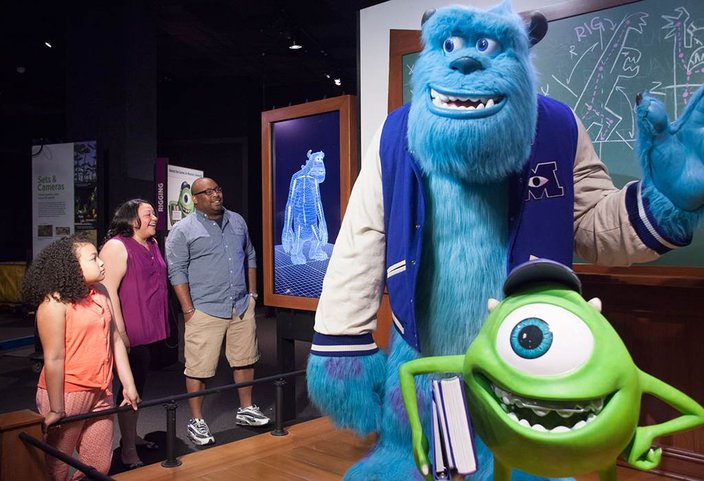 The Pixar exhibit was developed by the Museum of Science, Boston in collaboration with Pixar Animation Studios and members of the Science Museum Exhibit Collaborative. Besides pulling back the curtain on beloved movies like "Finding Nemo" and "Up," the exhibition aims to inspire people — especially kids — to learn more about the STEM fields that drive the artistry seen on the big screen.

“When you see this exhibit, you'll see how STEM disciplines are really important to the 21st century craft of filmmaking and how original storytelling can make STEM accessible and attractive to new learners," said Eben Otsby, director of technical artists at Pixar, who had a hand in "Toy Story," "Toy Story 2" and "Monsters, Inc."

"We have a huge part of the studio that works totally in STEM disciplines — techniques that are rooted in math, physics, and computer science.We have at least 400 people who are working mostly in these disciplines at all times.” – Eben Otsby of Pixar

As the first stop of a national tour, the 14,000 square-foot exhibition opens to the public on Saturday and runs through September 5. More than 40 interactive elements give visitors a behind-the-scenes look at the nitty-gritty of creating an animated feature film. Each of eight sections focuses on a different step of Pixar's production pipeline: Modeling, Rigging, Surfaces, Sets & Cameras, Animation, Simulation, Lighting, and Rendering.

For instance, in the Surfaces section, visitors learn how surfacing artists at Pixar use physics and mathematics to ensure that the surfaces of all objects in the movie look realistic — so in "Ratatouille," Remy's fur looks soft and fuzzy, but his eyes appear shiny and smooth. In particular, the "bidirectional reflectance distribution function" describes what happens when light bounces off an object and back toward the eye or camera. When programmed into a computer, it can calculate how a surface will look given the lights, camera position, and reflectivity of the object. Visitors may try out surfacing for themselves by changing the appearance of a virtual object via transparency, reflection, refraction angle and other variables. 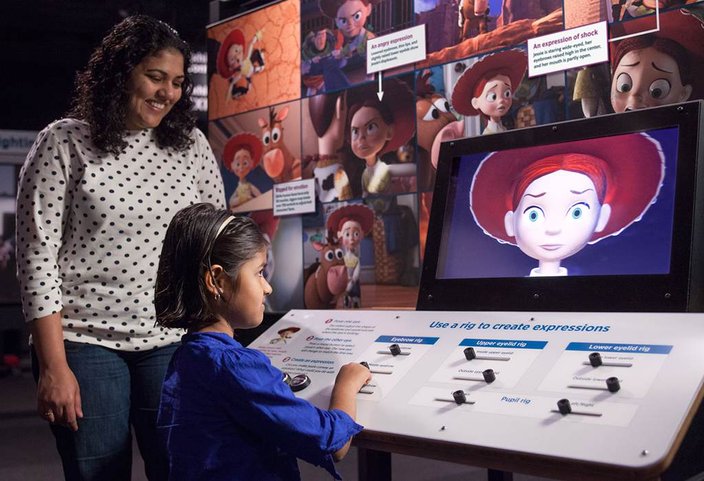 A young visitors uses rig controls on Jessie’s face to create expressions at The Science of Pixar exhibition.

Hands-on activities in Lighting demonstrate how computer animated films use virtual, digital lights in the same way live-action movies use real lights. Pixar's lighting artists get complete control over how many and what kind of virtual lights populate every scene to convey the appropriate emotional impact. Museum visitors can get a taste of this by toggling the brightness, movement and color of lights on an oversized statue of Dory from "Finding Nemo" to create different moods. Another activity involves lighting a miniature physical model of Carl's living room in "Up" using sunlight and lamps.

Sets & Cameras focuses on how Pixar films are able to mimic the complexity found in the natural world: trees, moss, plants and grasses. For set research during the making of "A Bug's Life," the team created a tiny camera on Lego wheels, and had it wander around outdoors to catch all the nuances of a true bug's-eye view. An interactive setup at the exhibition recreates “Bug-Cam” and allows visitors to navigate the camera through a forest environment. A video and grass simulator also explain how a blade of grass can be represented mathematically by a simple parabola, then varied by color, height, color, and curvature to create a realistic-looking field.

Other video stations scattered throughout the exhibition highlight the diverse range of STEM-related careers at Pixar. Current employees discuss their day-to-day roles, aspects of movies they've worked on, and how STEM has helped them work through tough creative challenges.

"We have a huge part of the studio that works totally in STEM disciplines — techniques that are rooted in math, physics, and computer science,” said Otsby, who studied both computer science and architecture in school. “We have at least 400 people who are working mostly in these disciplines at all times.”

For more information about tickets to "The Science Behind Pixar," click here.