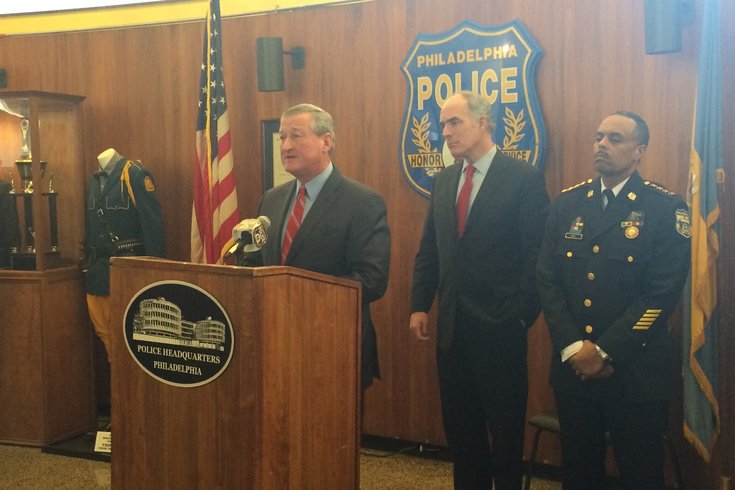 "We are seeing the rise of a lone-wolf problem," Casey said, though neither he, Kenney nor Ross would speculate further about the details of the ongoing investigation into the Jan. 7 incident.

In the days after the shooting, police reported they had been alerted to a possible conspiracy involving the alleged shooter, Edward Archer, and others who helped plan the attack. While officials would not comment directly on the investigation, Thursday's statements seem to debunk the conspiracy claims.

According to police, Archer allegedly opened fire on Hartnett, shooting at the officer 13 times as he sat in his police cruiser near 60th and Spruce streets. Hartnett, 33, was stuck several times in the arm and was able to exit his vehicle and return fire, hitting Archer at least once.

Archer, 30, of Yeadon, Delaware County, allegedly told investigators that the shooting was done "in the name of Islam," and he reportedly admitted responsibility for the alleged attack during interviews with police, investigators said.

Archer allegedly used a police-issued, 9mm Glock 17 handgun that had been reported stolen in 2013, investigators have said.

Casey said he visited a recuperating Hartnett and lauded the officer's bravery.

"His courage, in the face of extreme danger, to say it was an inspiration would be an understatement," the senator said.

At the press conference, Casey announced that he is signing on as a co-sponsor to the Community Partnerships Act of 2015, which is intended to "help to support state and local governments, as well as universities and community organizations, in programs and training that counter violent extremism."

Casey also will send a letter to Homeland Security Secretary Jeh Johnson, he said, inviting him to Philadelphia for a roundtable discussion with local law enforcement and community leaders about Islamic State-related incidents in Pennsylvania.

Kenney spoke briefly on Thursday to discuss the backlash he has received for his comments after the shooting. Kenney had said that the shooting had nothing to do with "Islam, or the teaching of Islam." Since then, television commentators and political pundits have attacked his remarks.

"[They were] misinterpreted by Republicans, because that's easy for them to do," he said.

The mayor said he had intended to point out the shooting was the action of one man and not a reflection of the city's entire Islamic community.

"He's a criminal, and they (Muslims) are not criminals," he said, calling Philadelphia's Muslim residents "God-fearing, tax-paying Americans."

"Everyday he's getting a little better," Ross said. "But, he's got a lot of recovery ahead of him."

The FBI, which is investigating the shooting, is expected to discuss the issue more at a related press conference Thursday afternoon.