The Republican has emphasized his willingness to stand up to China, increase border security and support voter ID requirements 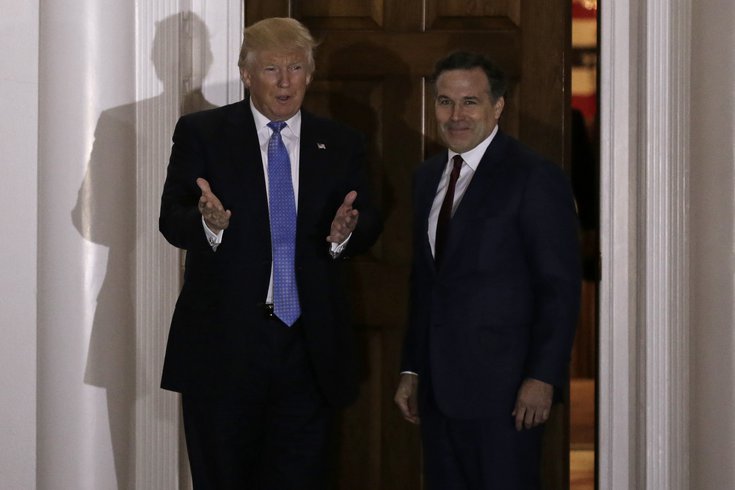 David McCormick, a Republican running for U.S. Senate in Pennsylvania, has pushed an 'America first' agenda on the campaign trail as he has sought to court Donald Trump supporters. Above, he stands with Trump in 2016.

David McCormick, an economic advisor in the George W. Bush administration who went on to lead the world's largest hedge fund, is among seven Republicans seeking to win the open U.S. Senate seat in Pennsylvania.

McCormick, 56, has pitched himself as a "battle-tested and Pennsylvania true" candidate who can take on President Joe Biden and the Democrats. The primary election is Tuesday.

McCormick has emphasized his willingness to stand up against China's growing economic and military presence by restoring American manufacturing jobs, protecting intellectual property and issuing sanctions for China's role in trafficking fentanyl into the U.S. He also supports securing the Mexican border with a wall and implementing voter ID requirements.

McCormick has said he opposes abortion except "in the very rare instances there should be exceptions for the life of the mother."

He has catered his campaign messaging toward supporters of former President Donald Trump, hiring two prominent former Trump staffers, Stephen Miller and Hope Hicks, to serve on his campaign team. Despite this, Trump endorsed Mehmet Oz and later claimed McCormick was "more Toomey than he is MAGA," a reference to retiring Sen. Pat Toomey, one of seven Republicans who voted to convict Trump during his second impeachment trial. McCormick responded that he's running on Trump's "great 'America First' agenda."

McCormick's relationship to the Trump administration is complex.

He's married to Dina Powell, who was once the Trump administration's deputy national security advisors for strategy, and reportedly declined a position as the U.S. secretary of defense in 2019. In November 2020, McCormick was among 11 people removed from the Defense Policy Board, the top advisory committee to the U.S. Department of Defense. He had been placed on the board in 2017.

Though McCormick lived in Connecticut while he worked at Bridgewater, he was born in Washington County, near Pittsburgh, and attended high school in Bloomsburg, Columbia County.

His father, James McCormick, was once the president of Bloomsburg University and a chancellor for the Pennsylvania State System of Higher Education.

David McCormick attended West Point and served in the U.S. Army for five years after graduating in 1987. He was among the first troops deployed to Iraq during the Gulf War in 1991. He received a doctorate degree in public policy from Princeton University in 1996.