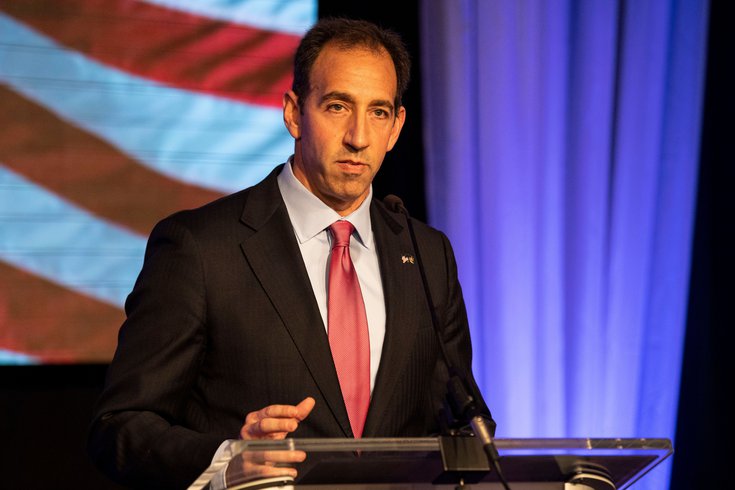 Jeff Bartos, a businessman from Montgomery County, is seeking the Republican nomination for the open U.S. Senate seat in Pennsylvania. He previously ran an unsuccessful campaign for lieutenant governor.

Jeff Bartos has experience as a lawyer, real estate developer and energy efficiency consultant. He's seeking to add U.S. Senator to that list.

Bartos, 49, is among seven candidates seeking the Republican nomination for the open U.S. Senate seat in Pennsylvania. The primary is Tuesday.

Many voters may recognize his name from an unsuccessful run for lieutenant governor in 2018, which was tethered to the gubernatorial campaign state Sen. Scott Wagner. But Bartos is a lifelong Pennsylvania resident, something of a rarity in this race.

In many ways, the Montgomery County resident has aligned himself with Trump-era Republican orthodoxy, though he has acknowledged Joe Biden as the winner of the 2020 presidential election.

He supports the Second Amendment and opposes defunding the police in the face of rising crime rates. He backs voter ID laws, seeks to lower corporate tax rates to incentivize commerce and "beat China" by protecting American intellectual property and jobs.

Bartos has condemned Gov. Tom Wolf's COVID-19 lockdowns because of their impacts on small businesses. Early during the pandemic, he helped create the Pennsylvania 30 Day Fund, a nonprofit that provided forgivable loans to small businesses.

In response to the leaked Supreme Court draft, which signaled the possibility that Roe v. Wade will be overturned, Bartos said "Roe was wrongly decided" and that the court has "the opportunity to follow the Constitution and allows states to protect the unborn."

Before Bartos started ESB Holdings, his family-owned real estate development company, he was the CEO of the Mark Group, a energy efficiency services firm that specialized on residential buildings.

The U.K.-based Mark Group built an office led by Bartos in the Philadelphia Navy Yard in 2010, when it was welcomed by politicians eager to expand the city's energy sector. But Pennsylvania officials asked the company to return $150,000 in state funds when the firm shut down its foreign operations in 2015. The company hadn't fulfilled its commitment to stay at the site for five years.

Bartos grew up in Reading, where Lt. Gov. John Fetterman, a Democratic candidate for U.S. Senate, was born. Despite their opposing views, the two have maintained a public friendship.

Though they disagree on a lot, they both support is more funding for addiction treatment programs as a way to stem the opioid epidemic, which has hit Pennsylvania particularly hard.

Bartos attended Emory University in Atlanta, where he studied political science, before earning a law degree at the University of Virginia.