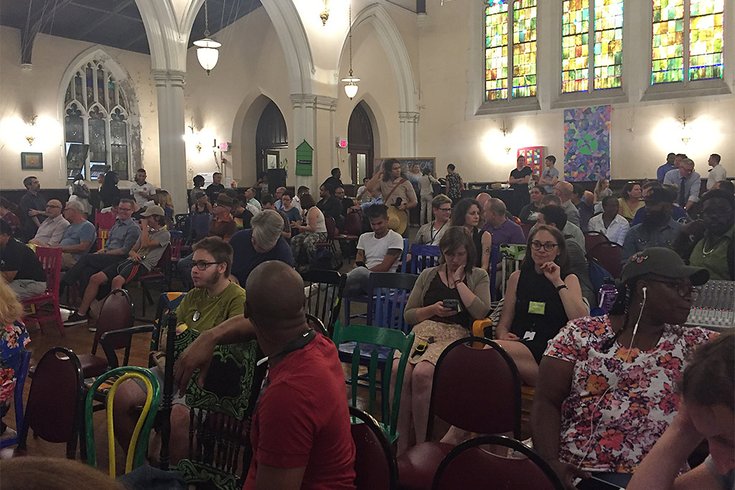 A large crowd attends a community conversation at the Broad Street Ministry in Center City on Thursday night which focused on the troubled past and future of the Mazzoni Center, Philadelphia's LGBTQ health care facility.

That’s how Amber Hikes described Thursday night’s packed house at the Broad Street Ministry. The executive director of the Philadelphia's Office of LGBT Affairs kicked off its second-ever LGBTQ "community conversation" as the city's Gayborhood reels from an intense racial divide and a recent scandal.

This spring, allegations involving sex and drugs rocked the Mazzoni Center, one of the country’s most well-known LGBT health facilities, but despite a walkout by more than 60 employees and several high-profile resignations the story hasn’t gained much traction beyond the Gayborhood. The community was already in the midst of ongoing allegations of racism and transphobia that ultimately led to an investigation by the Philadelphia Commission on Human Relations (PCHR). It’s been a rough year.

Despite the ongoing social media uproar, protests and angry editorials in local gay papers, it was apparent Thursday night that most people in the LGBTQ community want two things: answers and accountability.

In fact, the decision by the city’s Office of LGBT Affairs to focus Thursday's public discussion on the Mazzoni Center spoke volumes. Putting a spotlight on the center’s troubled past and future could offer a step in the right direction after a scandalous few months, though it was clear by the end of the almost three-hour meeting that the wounds are still quite raw for many.

A THREAT TO UNIONIZE

Several employees (one wearing a Trans Voices Matter t-shirt) stood up and asked for permission from the facility's board of directors to seek representation by SEIU Healthcare PA. They sought permission to negotiate a union contract “in good faith.” And though they will likely have to wait for at least a few weeks to find out the answer, the applause that followed the announcement was deafening.

And for the first time, Mazzoni's high-level staff and board members publicly addressed how they intend to repair damage done after allegations of unethical (and possibly illegal) behavior that ultimately led medical director Dr. Robert Winn and CEO Nurit Shein to resign earlier this year. While little was actually said about what precipitated their exodus (the investigation is still pending), Stephen Glassman, the center’s interim CEO, admitted that issues of inequity have, sadly, plagued the center for years.

“It’s very important from my perspective,” he said, “to address trauma and pain.”

Glassman, former chair of the Pennsylvania Human Relations Commission, told the packed crowd of LGBT leaders, staff and community members at the Broad Street church that he’s been working closely with employees to develop a new plan of action. That plan, he said, will ultimately lead to hiring Mazzoni's first director of diversity and inclusion as well as a new CEO, and filling vacant board seats – all with a focus on diversity.

“Our last CEO was here for 20 years” while the organization and community has changed, said Glassman. Most recently, three new physicians were hired. It’s expected that new policies, procedures and trainings will be introduced in the next few months.

The ball got rolling last night as Mazzoni’s leaders fielded question after question, like whether management and the board will face any fallout for failing to address complaints about sexual impropriety sooner. Others asked how patients are being supported and what impact diversity will have on selecting the next CEO. Someone even asked if financial compensation would be provided to former employees who may have quit during the crisis. No word on that, said Glassman.

The bottom line is that Mazzoni’s restructuring will likely take months. Glassman is expected to be the interim CEO for at least six to nine months, and while the process may seem slow, the goal is to overhaul the workplace, he said.

The question, of course, is whether everyone believes that will happen.

Several times employees could be seen expressing shock and shaking their heads when the bigwigs took to the podium. The divisiveness between leadership and employees was palpable. 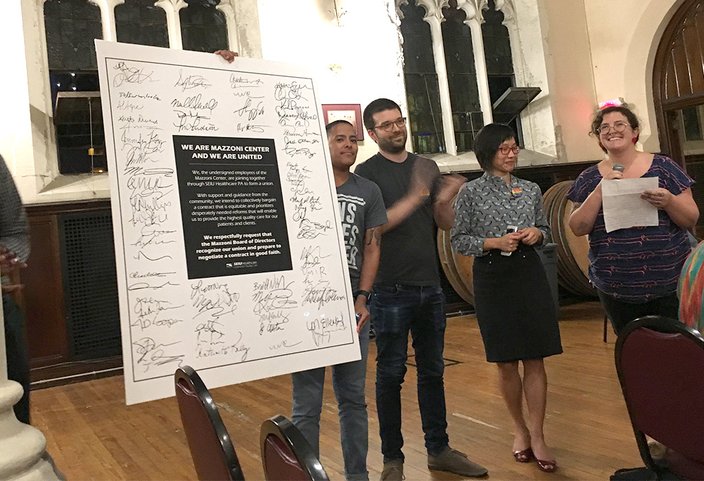 'I DON'T SLEEP AT NIGHT'

Throughout the past few months, the center’s toughest critics have accused Mazzoni (and other LGBT organizations in Philly) of failing to reflect the community it serves. Mazzoni, for one, has very few people of color or transgender people on the board, even though the center liberally serves both populations.

Overall, accusations of tokenism, salary incongruities and mismanagement have been lobbed at the center. One person even described the working environment as “toxic.”

For patients like Mark A. Davis, the discussion, despite its loud hiccups, was fruitful. New to the center, Davis is a self-declared bipolar, HIV-positive cancer and suicide survivor who relies on Mazzoni for his treatment. “It’s not about us without us,” he said, crediting the staff with moving the center forward during the challenging time, or what Board President Dr. Tony Rodriguez described as “a crisis.”

Davis is one of 9,000 active patients receiving treatment at the center, along with 1,000 people living with HIV and 2,300 seeking transgender services. These numbers don’t include people seeking legal and other counseling that has helped to set Mazzoni apart from many other health facilities of its kind.

As the center’s leadership seeks to mend relations with staff, patients and community with its public mea culpa, it also got a fresh start by moving into a bigger, more modern facility in July.

Still, larger questions loom, including will those who enabled the worst of these alleged indiscretions ever be censured?

Based on what was said last night – the answer is likely no. In addition to Winn and Shein, six board members resigned during the height of the scandal. It is unknown how many people may have quit or been terminated during that time period, but the axe doesn’t seem to be falling on what’s left of administrators or the board despite a push by some.

One issue that may be taken to task is board tenures, which can be awfully long at Mazzoni. There are some board members, like Kelly Harris and Michael Wolf, who have been serving Mazzoni since 2005. That some of those same people accused of nurturing an environment that allegedly allowed bad behavior to flourish has left some people feeling more than a little frustrated, including a former employee named John.

“I was troubled by the inner workings,” John wrote in a letter that was read aloud last night. John, a then-graduate student at Penn, alleges that his work assessing the organization was squelched after allegations surfaced that patients were being sexually abused by their own doctor.

As his words were read, words accusing specific administrators and board members of misconduct, the hall was exceptionally quiet. John, who no longer works at Mazzoni, called what happened, simply, “an abuse of power.”

To that, Rodriguez said, “ I’m sorry ... the board is sorry.” He repeated the sentiment often.

“We should have known…" Harris added. "I don’t sleep at night thinking about how people have been hurt by this situation.”