Should bicycles left in handicap parking spots get towed?

The question arises after an interesting weekend-morning scene in Philly 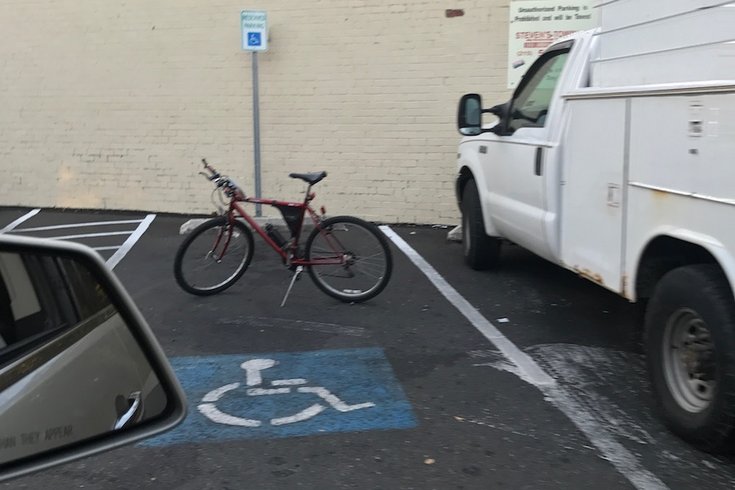 On Saturday morning (October 7, 2017), a patron at a Dunkin' Donuts in Mt. Airy decided to use a handicap parking spot for his bicycle.

At the risk of rattling the cage of Philly’s never-ending bicycle-versus-cars war, I’d like to draw your attention to a story out of Mt. Airy this weekend.

It’s a situation that raised an unusual question: If a bicycle is parked in a handicap spot, would/could/should it get towed?

The scene was a Dunkin Donuts along Stenton Avenue near Sedgwick Street in Mt. Airy. It was about 7 a.m. Saturday, recalled a customer who noticed a bicycle parking square in the middle, sideways, of a handicapped parking spot for, y’know, cars.

The old-head bicyclist apparently didn’t much care what anybody thought of his parking decision.

“Dude was about 65 years old,” shared a witness named Kevin. “He was loud as s*** saying to his buddy, ‘Dammit, I drink coffee too!’ I couldn’t stop laughing.”

Neither could I after seeing his “Cats be serious about their Dunkin’ Donuts in the morning” Facebook post about Bike-Parking-Gate.

Now, there’s certainly nothing funny about the able-bodied swiping parking spots from those entitled to use them for health reasons. That's just wrong.

Still, two questions arose: Would a towing company respond to a call to “tow” a bicycle out of a car’s parking spot? And, does this offense warrant a ticket?

This makes perfect sense. (On your marks, get set, GO, commenters who think bicycles should be licensed in Philadelphia.)

As for the first question, a warning sign at that location noted that vehicles parked illegally were at the mercy of Steven’s Towing, an Umbria Avenue outfit some seven miles away.

I called Steven’s Towing on Monday morning for their take. Alas, it went straight to voicemail, and the message went unreturned. (Perusing their Yelp and Google reviews, though, people are not a fan of this operation, but none complained about bicycles being towed. So, there's that.)

In lieu of that comment, I reached out to the most recognizable name in Philadelphia towing: Lew Blum of Lew Blum Towing. I ask you to set aside your predisposed disdain for tow companies and laugh along with Blum, who got a big kick out of the question.

"No, we don't tow bicycles," he said through belly laughter, "We tow motorcycles, but not bicycles."

Blum noted that should people want that to change, it would take some support from City Council to rewrite the rules. As for businesses facing what the coffee shop faced this weekend, he offered some advice.

"They can call us and we'll come out and put up a Lew Blum sign," he said. "But, we do things the right way, so we couldn't tow bicycles" without City Council approval to do so.

As for the scene at the Dunkin Donuts, it doesn’t seem as if the violation rose above the level of laughing-emoji curiosity. (I mean, instead of towing, a Good Samaritan could just pick the bike up and move it, oh, two or three feet if the spot was needed, I suppose.)

Did the bicyclist get called out for his boisterous declarations?

“Not one person,” recalled Kevin, “said a thing.”