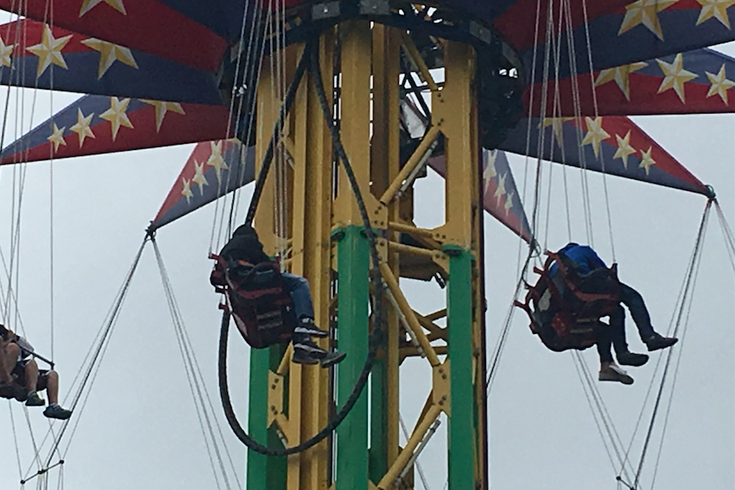 Sandra Kearney photographed the SkyScreamer ride at Six Flags Great Adventure on Sunday, June 3, 2018. The ride became stuck while her family members were aboard.

Guests at Six Flags Great Adventure probably did not have the kind of day they were hoping for on Sunday. Gloom and heavy rain rolled in by the afternoon and one of the park's more prominent rides, SkyScreamer, had a pretty scary malfunction.

At around 2:30 on Sunday afternoon, the spinning gondola ride stalled out in mid-air with 32 passengers on board, according to a statement Six Flags provided to NJ.com.

The ride is supposed to carry passengers up a 242-foot tower and send them spinning for a thrill lasting all of two minutes and 30 seconds. On Sunday, the passengers ended dangling about 120 feet in the air for 15 minutes. The ride was eventually lowered back to the ground.

A Six Flags spokesperson said the ride came to a stop when safety sensors detected an error and automatically applied an emergency stop.

One woman who was at the park on Sunday told PhillyVoice she watched in horror as the ride appeared to break down with her son and husband aboard. She disputed Six Flags' claim that the ride was deactivated by a sensor.

"It did not stall or stop because of a sensor," said Sandra M. Kearney. "I watched horrified as pieces were breaking off and the cable came out with sheathing and got stuck in the ride as they were coming down ... I was hysterical because I thought I was going to watch my son and husband fall to their deaths."

The ride, which opened in 2012, remained closed on Monday as park officials put it through a thorough inspection. It's not yet known when SkyScreamer will be back up and running.