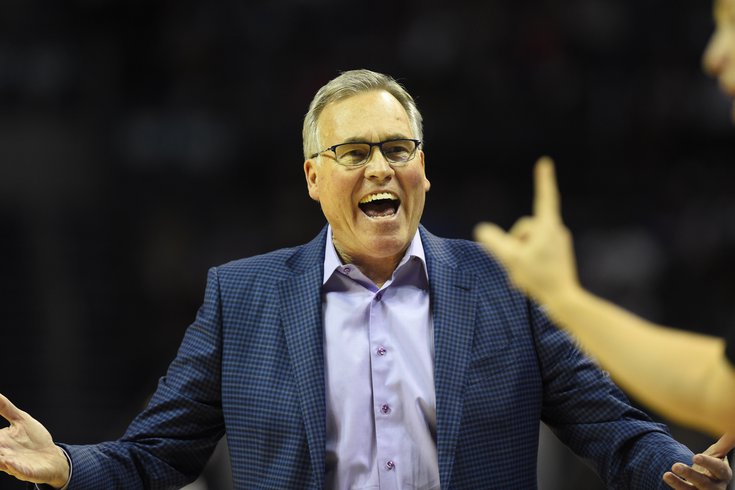 Veteran head coach Mike D'Antoni is suddenly available after spending the last four seasons in Houston. Should the Sixers go after him?

While you were probably busy watching the Eagles vomit all over themselves Sunday, former Rockets coach Mike D'Antoni was announcing his departure from Houston. Four years after leaving the Sixers' bench, D'Antoni is back on the market, and the Sixers have an opening he might be able to fill.

There appears to be some interest there, with ESPN's Adrian Wojnarowski reporting Sunday afternoon that D'Antoni would be in the mix for the Sixers' head coaching gig.

D’Antoni will be considered among a group of candidates for the Philadelphia 76ers coaching opening, sources tell ESPN. D'Antoni was an assistant for several months under Brett Brown before accepting the Rockets job four years ago. https://t.co/MeoUrwWADm

We'll discuss the absurdity of the Sixers being connected to all of these names in a minute, but you know the drill by now. Let's discuss D'Antoni's fit and what may or may not work here.

The case for D'Antoni

D'Antoni's fingerprints are all over the league nowadays. The Seven Seconds or Less Suns more or less revolutionalized NBA basketball, and when you're ahead of the league's curve by a decent margin, that tends to come attached to team success.

That has indeed been the case for D'Antoni, who has won at a high clip for most of the last 15 years. While he's best known for his time leading the Phoenix Suns in the early 2000s, his most recent stint as the head coach of the Houston Rockets was another huge success, with D'Antoni's Rockets owning the highest regular-season win percentage (.682) of any team in the Western Conference over the last four seasons. D'Antoni's arrival ushered in a run of super-powered offenses in Houston, who were scoring healthily before he arrived but took things to another level with D'Antoni.

"Is it possible for James Harden to be a more dangerous offensive player?" was a fair question at that point. He had already turned in an MVP runner-up campaign leading into a Western Conference Finals run in 2014-15, but D'Antoni took him to another level by unleashing Harden as a nominal point guard as opposed to a more traditional two-guard role. Harden led the league in assists during D'Antoni's first season in 2016-17, and it was off to the races from there.

Of course, little needs to be said about those Suns teams that took the league by storm from 2004-2008. D'Antoni made Steve Nash, a very good but sub-elite player upon his arrival in Phoenix, into a multiple-time MVP. The supporting cast changed around Nash and D'Antoni as role players received big contract offers elsewhere, and the Suns just kept winning. There are big what-ifs from that run, too, most notably the 2006-07 Western Conference Semifinals, where Amare Stoudemire and Boris Diaw were both suspended for a game in a tight, controversial series.

If you want somebody to come to Philadelphia and run more pick-and-roll, look no further. D'Antoni's spread pick-and-roll offense has coaxed the best out of both his ballhandlers and his big men, with rim-running threats like Amare Stoudemire and Clint Capela blossoming under his watch.

Joel Embiid doesn't seem to fit the mold of that sort of player, but perhaps D'Antoni's arrival would signal a change of emphasis for Embiid, who could do with a steadier diet of rim runs (and an improvement to his actual diet). Ben Simmons, however, feels like a natural fit as the athletic, downhill forward who can put pressure on the rim to create gaps for ballhandlers. D'Antoni is one of the game's best stewards of positionless basketball, and Simmons would give him a terrific building block for all sorts of lineup experimentation.

Though D'Antoni has not had the strongest defensive reputation throughout his career — okay, that's an understatement — the Sixers should be able to play high-level defense in almost any system with Embiid and Simmons as the building blocks. What they need is someone who can make their lives easier on offense, and extract more offensive value out of a jumbled collection of role players, easing the scoring burden on two guys still developing their games.

D'Antoni has been blessed with some elite offensive talent on his teams throughout the years, but that is true of any coach who has won at an above-average clip. You still have to make use of that talent, and no one would accuse D'Antoni of falling short of offensive expectations.

The case against D'Antoni

I think there's a strong case to be made D'Antoni is the worst match of tactics with personnel the Sixers could find. As others will point out, you'd be asking a coach whose most basic desire is to open up the floor to coach a team anchored by a non-shooter and a post-up center. And while I certainly respect D'Antoni's resume and overall impact, I have my doubts about his ability to adapt and make the tactical adjustments this team does/will need when it counts.

Historically, D'Antoni has had trouble when he has been asked to adapt to personnel that doesn't fit cleanly into his idea of how basketball should be played. The 2012-13 Lakers, for example, were a disaster of comical proportions, and though D'Antoni doesn't wear all the blame for Kobe Bryant and Dwight Howard mixing like oil and water, he eventually threw his hands up on offense. You don't have to take my word for it, you can ask Steve Nash, who was on the team after playing for D'Antoni in Phoenix previously.

"This isn't necessarily any offense. This is bringing the ball down, calling over a pick and playing the game, and because we have good players on the floor, when [Bryant] distributes we can make them pay for leaning too much toward Kobe. When they lean too much to us, he makes them pay," Nash said at the time.

That sounds an awful lot like the concept-based offense the Sixers fell back on under Brett Brown, rather than the structured style they seem to need to get the most out of this group. Looking at how the Rockets evolved under D'Antoni, they did shift away from his preferred style, but once again did so in a spin-off of that structureless environment. Harden and Russell Westbrook were allowed to iso until the cows came home, and there was no real backup plan outside of letting them win one-on-one battles with a spread floor around them.

When D'Antoni hasn't had great fits to run his stuff, the results haven't been there. His Knicks tenure, save for a brief renaissance when Amare Stoudemire first signed there, was a complete disaster. It's also fair to question his playoff chops. D'Antoni isn't the reason the Rockets made a terrible Chris Paul-Russell Westbrook swap, nor was he the reason Paul got hurt in the 2018 Western Conference Finals, leading to their seven-game defeat. But his teams have always run into a wall before reaching the NBA Finals, even in years where they entered with homecourt advantage, and adjusting in the face of playoff adversity has never been his strength.

D'Antoni has made players better throughout his career, but those players have predominantly been guys who fit within what he likes to do instead of the other way around. Simmons, who we noted above could be a great rim-running threat under MDA, would still need a credible pick-and-roll handler or two to actually reach that potential. With all due respect to Shake Milton and Alec Burks, Steve Nash and James Harden they are not.

It's fair to wonder how D'Antoni's hiring would be received by Embiid. D'Antoni has virtually no interest in post-up play or occupying space in the painted area outside of drives and cuts. Is the veteran coach going to completely change his basketball philosophy, or would he demand big changes from a player who has already grown visibly and verbally unhappy with the state of things in Philly?

It seems notable that the last time D'Antoni was a potential candidate for the job here, the Sixers were being run by a general manager who was connected to burner accounts that actively disparaged Embiid to prop up Simmons: 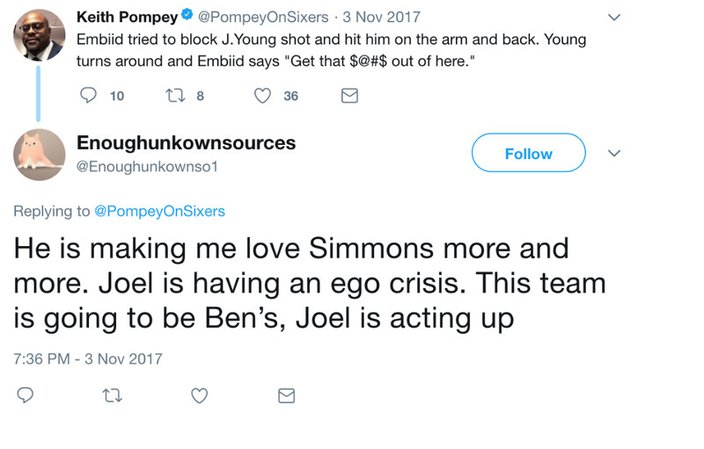 Yes, Colangelo might be gone, but D'Antoni re-emerging as a candidate highlights the absurdity of Philadelphia's current situation. They still have not made any formal decisions on how the front office will be shaken up, but here we sit discussing yet another coach they're interested in. All the remnants of the Colangelo front office, minus Colangelo himself, are still in place, the team is being connected to coaches who were candidates to replace Brown under his watch, and you're supposed to believe meaningful change is still taking place this summer.

None of this is necessarily the fault of D'Antoni. But this offseason should be about restoring trust in the organization, internally and externally, and hiring people who are going to get the best out of the team's most important players.

I suppose if you believe the Sixers need to trade Embiid and reset around Simmons that D'Antoni makes sense, but for all of D'Antoni's innovation at the NBA level, what he does/wants to do is pretty straightforward. Embiid doesn't really fit within that. Shouldn't that be a non-starter?