The Sixers humiliated the Wizards so badly the game hardly mattered

The beauty of all the close Sixers games this year has been the number of storylines fans and media can debate and discuss after the game. Blown leads have probably given Brett Brown more gray hairs than he'd like, but they certainly help spark a lot of conversation.

Friday night's game against the Wizards was a contest of a different sort. The Sixers beat the Wizards so badly, so completely that the aftermath of the evening was more about goofy things on the periphery, like headbands, scowls on the sideline, or a nice ovation for Thomas Embiid, in town to watch his son play. It was a 123-98 win that could have been by a lot more.

To be clear, the Sixers earned that distinction. They came out and kicked Washington's ass up and down the court, taking advantage of a team that visibly does not like playing together and carries itself with unearned arrogance despite years of failing to clear the bar of their expectations. They whine to officials, trot back in transition, and very obviously need to be broken up on some level.

The Wizards were once the team with an exciting young duo, capable of overwhelming opponents for stretches, but here they are, past the point of self-combustion. And while talent definitely mattered, it was simply caring that won the Sixers this game. They killed Washington on the glass, they put eight different players in double figures, and they never really let up.

If you want an explanation for why there should be hope for the Embiid-Butler-Simmons trio, it's because those three really care about both sides of the ball, and there is already a mutual respect for how they carry themselves on defense. One of the topics of the night concerned the headbands Butler and Simmons each wore for the game, and Butler could hardly get through raving about Simmons' defense before making a self-deprecating joke.

"He makes everybody's job easier, not just on the offensive end," Butler added. "He can literally switch 1-5. Me on the other hand? I'm not guarding five. If coach tells me to switch onto a five, I'm going to act like I didn't hear him."

I'll be honest with you guys, this game isn't really worth breaking down. So here's an assortment of funny things that happened post-game, along with a nice story for one of their young guys.

Who is responsible for the headbands?

Simmons: "I've been wearing them at practice, and he said if I wear it, he's going to wear it."

Verdict: I lean toward Simmons. He's the trendsetter here, after all.

In any case, Butler seems to dig it. 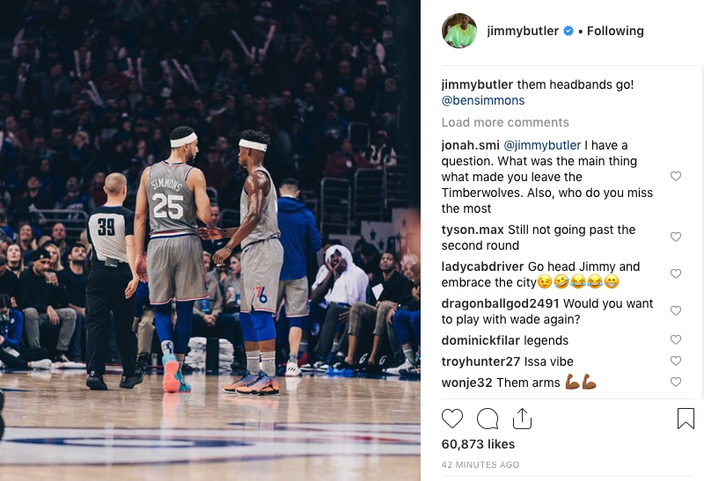 What did everyone else think of the headbands?

Embiid: "I'm kind of disappointed in them, I was expecting them to score at least 40 points, or 50, because that seems to be the trend this year. But like I said, we've been picking up defensively and that's a big positive. I'm excited to move forward."

What's it like to have the elder Embiid around?

Thomas Embiid, the father of Philadelphia's biggest star, has been in attendance for each of the last two home games. I'm not saying he's responsible for the back-to-back blowouts, but maybe the Sixers need to make sure he's around for more games.

In any case, Embiid the Elder (sounds like a great name for a lead character in a fantasy novel) was celebrating a big occasion on Friday, retiring from the Cameroonian army on Friday just a day after his birthday. They showed him up on the big screen at the Wells Fargo Center, and Embiid the Younger (this sounds more like an IPA) thought the response from the home crowd was great.

What happened with Butler and Shamet on the sideline?

Around halftime, a clip surfaced on Twitter of Butler making quite a face at Landry Shamet as he made his way past him on the sideline:

So of course, I had to ask Butler about this after the game.

"I'm just saying, he had JJ [Redick] laying on the floor, my feet were out, and like three other people's feet were out," Butler joked, "and you just decided to step on my foot out of all the things you could have stepped on? It's just incredible. And his locker's right next to mine back there too, so I was still staring at him after the game. But that's my guy."

It hadn't come up previously, but the assembled media took the opportunity to ask Butler about Shamet giving up his number 23 when Butler arrived.

Sarah Todd, Philly.com: Did he curry any favor with you by giving up his number?

Butler: I'm actually glad he did that. I was going to come here and wear No. 25, but for some reason I knew I couldn't get that one.

Serena Winters, NBC Sports: Did you give him anything in return for that?

Butler: A firm pat on the tail.

You can't accuse the guy of being boring.

Kendall Jenner was at the game again

And the Sixers beat the brakes off the Wizards. Leave the poor girl alone, nerds.

(Maybe "poor" isn't the right word here. You get what I mean, though.)

The Shake Milton era has begun

And now, an actual basketball thing!

You'd be forgiven if you weren't expecting Friday night's game to feature much of anything from the Sixers' two-way rookie. He has been filling it up in the G-League, but he's not exactly a proven commodity on a team aiming to win now. The developmental rookie minutes, rightfully, are going to Shamet right now.

But good on Milton for showing up ready to rip when his number was called early in the fourth quarter. He knocked down an open three on his first possession, played under control with the ball in his hands, and even came up with some defensive stops across 10+ minutes of action.

(Bonus note: when Milton was awarded a bucket on a Washington goaltend, the Sixers played "Shake Your Booty" by by KC & The Sunshine Band. A+ choice.)

Milton tumbled all the way to the 54th pick of this past June's draft due at least in part to an issue with his back, but the kid can play a little bit. He was an elite shooter all three years at SMU, connecting on nearly 43 percent of his three-point makes on over five attempts per game. That hasn't continued in the G-League, where he's swinging back and forth on the efficiency pendulum, but you can see the outline of a player who could be useful for Philadelphia with his combination of size and touch.

And he already seems to understand the Philly fans well.

"It was cool, Philly fans are very passionate," Milton told Jessica Camerato in the locker room after the game. "If it looks like you're kind of half-assing it, they're going to let you know about it, and they support you if you're out there playing hard."

No matter how many NBA games you watch, it's always cool to see a young kid take the first steps of their professional journey. Here's hoping the best is yet to come for young Milton.