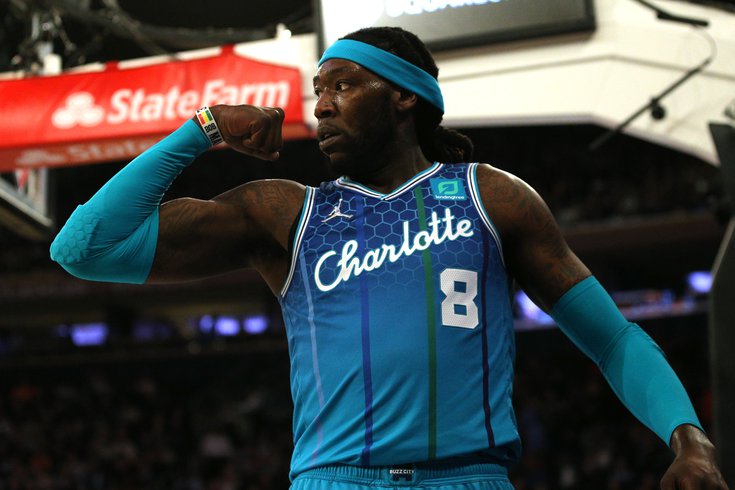 The Sixers are signing Montrezl Harrell to a two-year deal, as ESPN's Adrian Wojnarowski reported first on Tuesday afternoon. The second year of Harrell's contract contains a player option.

Though the Sixers have mostly laid dormant after their initial flurry of moves to start free agency, there were repeated indications out of the organization this summer that some veteran competition could be brought in at the big spot. With the inexperienced duo of Paul Reed and Charles Bassey battling for backup center minutes behind Joel Embiid — and PJ Tucker expected to play some small-ball center to boot — there appeared to be room on the roster for someone with a bit more polish behind Embiid.

Enter Harrell, a 28-year old vet with seven years of experience under his belt. Harrell has been the quintessential "energy big" from the moment he got a chance at NBA minutes back in 2015, and that has been his lot in life as a 6'7" big who entered the league as a power forward prospect and transitioned to essentially a full-time center beginning in his second year. And yes, we might as well get the jokes out now — Harrell is another one of Daryl Morey's former Rockets players, and a player whose best years came under Doc Rivers in Los Angeles to boot. A rare double whammy.

As a per-minute producer, Harrell has long been one of the most productive bench players in the league, with a resume that includes a Sixth Man of the Year award in 2019-20. During that final season under Rivers in LA, Harrell averaged a career high 18.6 points per game off of the bench, serving as a critical piece of a Clippers team that looked poised to go on a deep postseason run. Though he was a bench player that year, Harrell frequently closed games out for the Clippers, and was among Doc Rivers' most trusted players.

That was, it turns out, part of the problem. That Clippers team was one of Rivers' teams to surrender a 3-1 lead in a playoff series, and Harrell became a figure of some significance during that series as the Nuggets absolutely hammered L.A. whenever he was on the floor. Despite public cries to play Ivica Zubac and growing statistical evidence that Zubac was a superior option, Rivers went down with his original plan, leading to his departure from the franchise and his move to Philadelphia.

The issue was not so much Harrell as it was the use of Harrell. We have a large sample size showing Harrell is an adept finisher and a useful offensive player for basically any NBA team, someone who can hurt you as a pick-and-roll big with a capable partner alongside him. He now has at least a couple of those in Philadelphia, and he already has multiple seasons worth of experience playing off of James Harden, which will be to the benefit of Philadelphia's backup units. As the Sixers try to bring Tyrese Maxey along as a playmaker for others, having someone like Harrell in actions with him should help make Maxey's life easier. We're talking about a guy who has shot 62 percent from the field for his career, and a backup center who gets to the free-throw line a decent amount for any player, let alone a substitute big. Role players are ideally either good at a lot of things or elite at one or two things, and I think it's fair to put Harrell in the latter box as a roll-man. Not something to turn your nose up at.

The trick for Philadelphia will be treating him like more of a situational role player rather than a guy who is nailed-on within their rotation no matter what the matchup is or how bad he plays. The Sixers cannot be shy about playing someone like Paul Reed when they want a more defensive-minded, switch-friendly lineup. They have to be willing to throw small-ball looks built around PJ Tucker at center when the game is in need of a curveball or an opponent forces them to rethink their approach. Whether Doc Rivers responds to that challenge will only become clear over time, and until then, it's fair to be skeptical given their last stint together.

That dynamic is also critical as we try to handicap Philadelphia's end-of-roster battles. Signing Harrell appears to be bad news for both of the Paul Reed/Charles Bassey combo, though I'd argue it's much worse for the latter because of how much further away he is from a meaningful role. Whereas Reed dominated Summer League and has already played meaningful playoff minutes, Bassey was erratic in Vegas and hasn't played real minutes for the big club in quite a while. With the Sixers inching closer toward the hard cap, cutting one of their players with minimal guaranteed money feels like a foregone conclusion before the season starts. The only way that changes is if the Sixers make some sort of consolidation trade, which isn't out of the question.

The reactions will likely be split on this one, but even if you're a pessimist on Harrell — who has definitely tailed off some the past couple years — he's in a better position to succeed here than he was at his last couple of stops. With the star player in front of him, Harrell's role will be limited as long as Embiid is healthy, allowing the Sixers to take full advantage of his tenacity and finishing ability without overexposing themselves on defense. And though starting him isn't something you want to do, you probably feel better about your non-Embiid nights now than you did previously, with Harrell a capable enough spot starter who allows the younger, developing players to continue progressing in more defined roles.

And so much as it means anything, Harrell is another guy who isn't going to back down from anybody. After folding in so many ways over the last two years in the playoffs, the Sixers have loaded up on guys who are in their elemant when they're mixing it up and causing trouble with the opponent. If they can channel that energy and appreciate him for what he is rather than what they wish he could be, it could be a fruitful partnership.